1. How much will the firms pollute before policy intervention?

Without policy intervention, there is no benefit for a firm to decrease its pollution. Even though reducing the first few units costs relatively little, the firm maximizes profits by polluting its full amount of pollution, where the costs of abatement are 0. This results in Firm 1 polluting 10 million tons of Sulpher Dioxide, and Firm 2 polluting 20 million tons, for a total of 30 million tons. 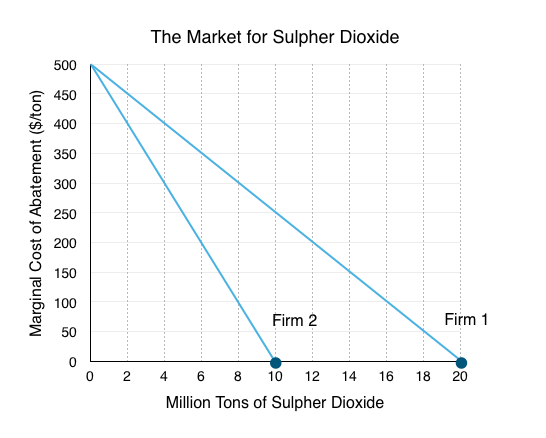 2. If the government implemented a cap and trade system, distributing a total of 12 million permits, with 6 million to each firm, who would sell and who would buy permits?

Since we know that each firm is given 6 million permits, we need to compare the marginal cost of abatement for each firm at that level. Drawing a line up from 6 million we see that for Firm 1, their marginal cost of abatement is $350, whereas Firm 2 faces a cost of $200. Since Firm 1 values pollution more that Firm 2, there are mutually beneficial exchanges where Firm 1 buys permits from Firm 2. 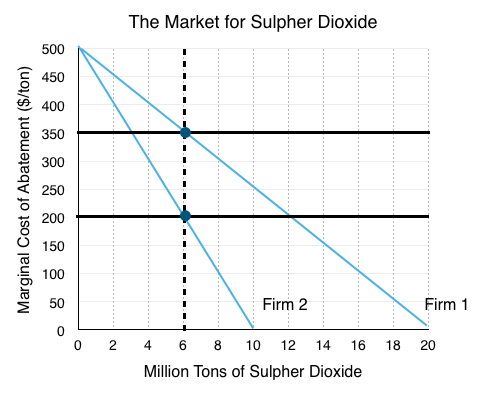 At 6 million permits, we can see that Firm 1 is willing to pay up to their marginal cost of abatement, or $350, and Firm 2 is willing to accept at least enough to cover their lost benefit from polluting, or $200. Notice that after Firm 1 buys a permit from Firm 2, this relationship changes – Firm 1 will be willing to pay slightly less, and Firm 2 will need to be paid slightly more.

To find the equilibrium price and quantity, we need to find a price level for permits such that the marginal cost of abatement for both firms is equal. By looking at our previous graph, and following what happens each time Firm 1 buys a permit from Firm 2, we see that Firm 1’s marginal cost falls and Firm 2’s marginal cost rises until they are equal. 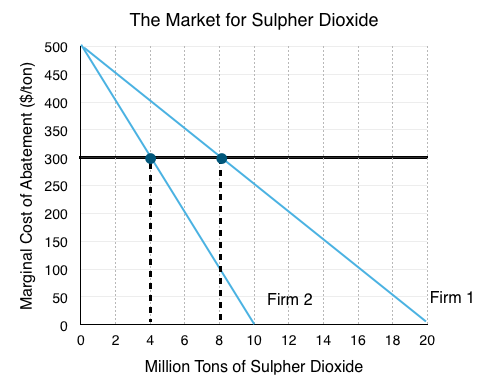 The transactions continue until Firm 1 has 8 million permits and Firm 2 has 4 million units. At this point the marginal costs of abatement are equal so no mutually beneficial transactions exist. Equilibrium quantity is 12 million, as regulated by the government, and the market price for permits is $300.

5. What are the total benefits and total costs to each firm from trading permits? Show that the trade was a Pareto Improvement

Note that while Firm 1 is technically willing to pay more than $300, in the perfectly competitive market for permits we usually deal with, if Firm 2 tries to charge any more than $300, Firm 1 will purchase permits from another firm.

We can see that since both firms benefited from the trade, that this is indeed a Pareto improvement from when they were each emitting 6 million tons of Sulpher Dioxide. The total surplus gain is equal to $150 million ($50 million + $100 million).

6. What is the correct tax level to receive the same result as in question 2?

The tax level to give us the same result as before is equal to the market price of permits. This price incentives the same action from Firms 1 and 2, but rather than making trades with each other, they are making decisions on whether or not to abate on the margin with consideration of the tax. They will abate as long as there marginal cost of abatement is lower than the tax rate. 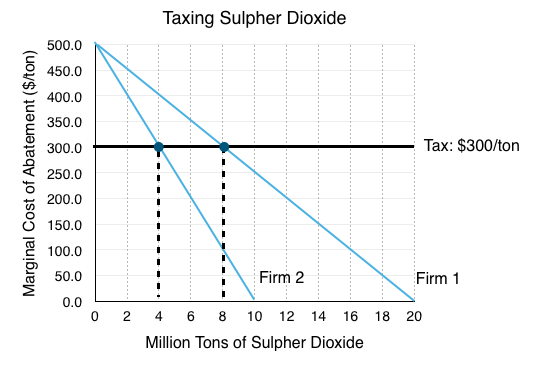 7. How much revenue will the government raise from the tax?

8. What assumptions does the government have to make under cap and trade? What about under the carbon tax?

9. If the government implemented a cap and trade system, distributing a total of 16 billion permits, how much will emissions be reduced by as a result of this policy?

In this case, since we don’t know the initial distribution of the permits, we can skip right to the result of the cap and trade. Knowing that firms will trade permits until the marginal cost of abatement is equal, we need to find a horizontal line where the total amount of pollution sums to 16 billion tons of Carbon. As shown in the graph below, this occurs at a price of $0/permit. This means that the government actually gave out enough permits for the firms to continue to pollute at the levels they had before the cap and trade program, rendering the policy ineffective. 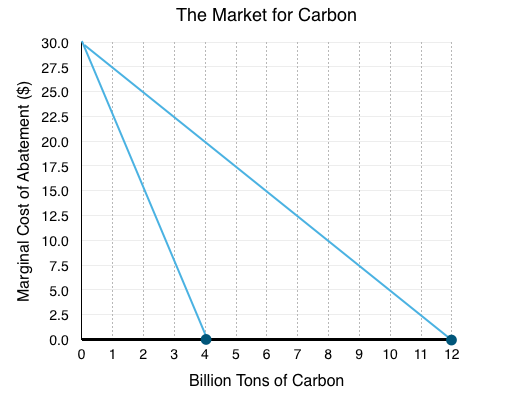 10. If the government wanted to reduce emissions by 50% by purchasing permits, what is the minimum amount they would have to pay?

Notice however that the government could get away with paying less. As long as they pay the firms for the marginal cost of abating to 8 billion tons of Carbon, the firms will be indifferent to abating or not. 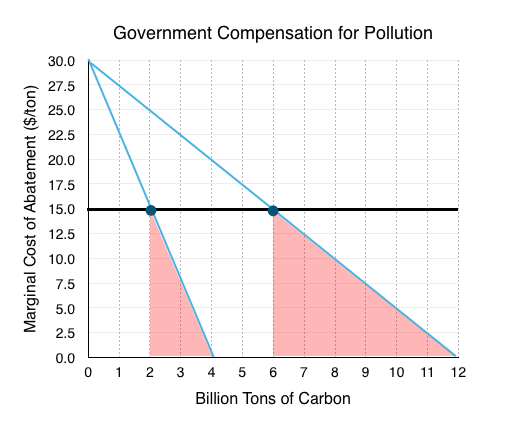 Total Costs to the Government

As shown, trying to purchase permits out of the market can become quite expensive.