How much would you spend on a diamond engagement ring? If you answered around the national average of $4,000 then you too have fallen victim to one of the most incredible marketing campaigns of all time. A diamond is intrinsically worthless, and against popular belief, they really aren’t that rare. Their resale value is next to nothing.

So why are we willing to spend so much on a ring? Well, we can trace that back to the 19th century. Before 1866, diamonds had been rare, but when massive discoveries were found in South Africa, the rock was on the verge of losing its value. Thats when Cecil Rhodes stepped in and founded De Beers Corporation – consolidating the mines and restricting supply, maintaining the fiction that diamonds were scarce and had inherent value.

The real change was in 1938, when the company hired N.W. Ayer to increase sales. By tying their product to love, and specifically to a marriage proposal, by the end of the century, over 80% of all brides had received a diamond wedding ring.

The ad campaign a ‘Diamond is forever’ displayed a diamond as a symbol of love, and suggested that a man should spend up to two month salary on the symbol.

Until 1990, DeBeers had a iron-tight grip on the market, at one point accounting for 90% of all sales, but now this grip is loosening. Using our models for monopoly and monopolistic competition, let’s examine the effects of this changing market.

Watch why engagement rings are a scam

Below is a representation of the demand curve for diamonds. Assume DeBeers is operating as a monopoly.

1. As a monopolist, what is the total effect of a price change from $2,400 to $1,600 on revenue? Break this change into an increase and a decrease. 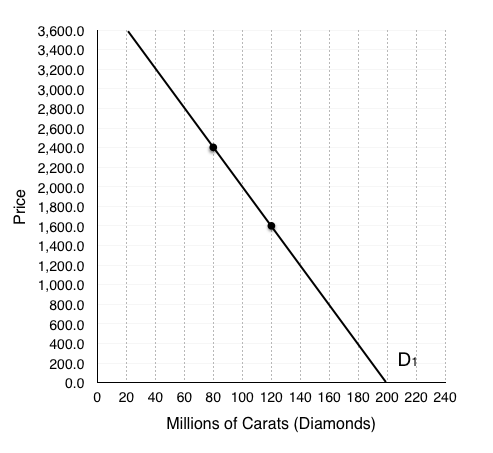 2. As a monopolist, what quantity does DeBeers produce? What price do they charge?

4. What is the deadweight loss under monopoly? 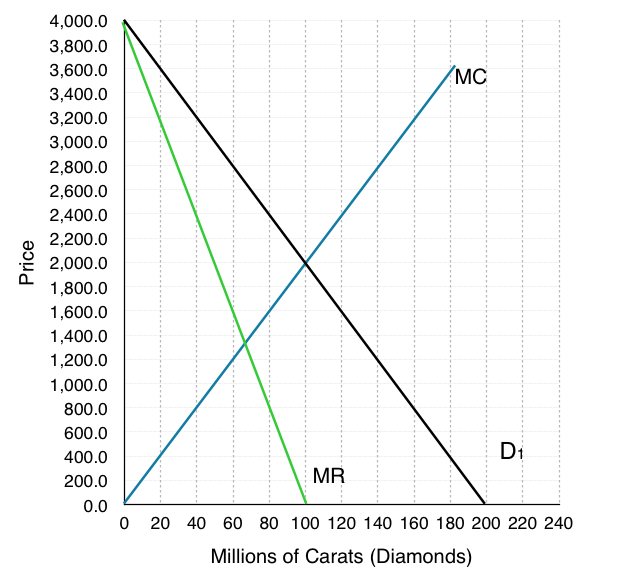 An ATC curve has been provided for DeBeers. These costs include marketing, mining exploration, and more.

5. What are DeBeers profits? Why are they able to sustain these in the long-run? 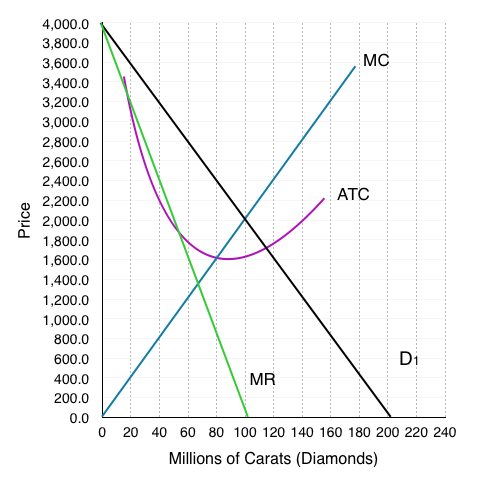 From the 1990’s to now, the market has changed considerably, with DeBeer having to adapt to new challenges. The first is the introduction of direct competitors. Russia’s state-owned diamond company ALROSA now produces more diamonds than DeBeers itself. Some new firms even bought mines from DeBeers when the company was trying to support their balance sheet.

Another change is the introduction of substitutes, with synthetic diamonds becoming more appealing to price-conscious young shoppers. Advances on the production of these products are fairly recent, notably, in 2015 New Diamond Technology displayed the potential of synthetics by creating a ten-carat polished diamond.

This means the market is changing from monopoly to monopolistic competition. We know that entry of other firms will cause the monopolists demand curve to shift.

Read more about how the diamond market is changing

7. As a monopolistic competitor, what quantity does DeBeers produce? What price do they charge?

8. What are DeBeers profits now?

9. What is the deadweight loss under monopolistic competition? 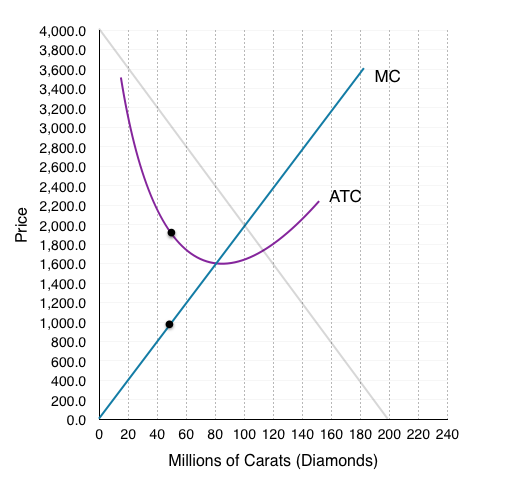 10. Are these market changes good or bad for consumers?

In this case study we have shown how microeconomic concepts of monopoly and monopolistic competition can be used to understand current events in the news. Do you have a story you think would make a good case study? Contact economics103@uvic.ca to propose your own case.