The American statesman Benjamin Franklin (1706–1790) once wrote: “No nation was ever ruined by trade.” Many economists would express their attitudes toward international trade in an even more positive manner.

The evidence that international trade confers overall benefits on economies is very strong. Trade has accompanied economic growth in Canada and around the world. Many economies that have shown the most rapid growth in the last few decades—for example, Japan, South Korea, China, and India—have done so by dramatically orienting their economies toward international trade. To understand the benefits of trade, or why we trade in the first place, we need to understand the concepts of comparative and absolute advantage.

In the previous section, we stated that points outside the PPF were not possible given our constraints. With trade, these constraints can change. Continuing the example from Chapter 2.2, suppose another person, Jamie, becomes stranded on the island with you. You could choose to avoid him and live your own separate lives, or you could work together to improve each other’s well-being. It turns out Jamie has different skills than you – he is better at producing both crabs and pineapples. (See Figure 2.3a)

Why would Jamie want to trade with you if he is better at producing both goods? We mentioned before that preferences determine where you would produce. For this example, assume that you want to produce and consume the following:

Each of you walks away with two more crabs than before.  This is what we mean when we talk about gains from trade. Both you and Jamie are now able to produce at a point outside your PPF’s. To understand where these extra crabs come from, we must first explore the concept of comparative advantage.

It’s All About Oil

A country has an absolute advantage in producing if it uses fewer resources to produce. Absolute advantage can be the result of a country’s natural endowment. For example, extracting oil in Saudi Arabia and other Middle Eastern countries is essentially just a matter of drilling a hole. Producing oil in countries like the United States can require considerable exploration and costly technologies for drilling and extraction. This case of absolute advantage has been a key contributing factor towards much of the chaos in the Middle East. The United States and other countries will go to great extents to defend their oil interests, and will sometimes meddle in other country’s affairs in devastating ways.

Let’s look further into these gains from trade.

When you increase your production of pineapples from 20 to 30, you have to give up 4 crabs. This means your marginal cost is 0.4 crabs for 1 pineapple.

When Jamie decreased his production of pineapples from 50 to 40, he gained 8 crabs. This means his marginal cost was 0.8 crabs for 1 pineapple.

In this example, marginal costs are changing. This means that depending on where individuals produce, they may have a different comparative advantage. Recall that marginal cost is the slope of the PPF, so as each individual produces more pineapples, the pineapples become more expensive to produce. This is known as the law of diminishing returns which states that as additional increments of resources are added to producing a good or service, the marginal benefit from those additional increments will decline. This example has introduced a lot of different concepts – moving forward, our examples will be simpler, and linear.

We have changed Jamie and your skill set to be linear in Figure 2.3d. 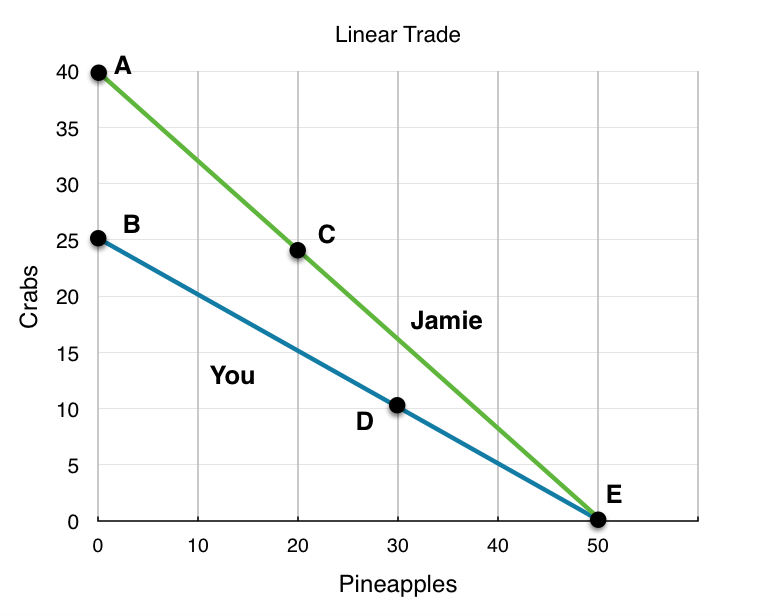 Now we can use our tools of efficiency and trade to determine if certain points are efficient. In Figure 2.3d various points have been shown to reflect possible points of production for you (blue) and Jamie (green).  Remember, we have no information about preferences. The first step is to find who has the comparative advantage for which good. For a linear PPF, this just means finding the slope.

This means his opportunity costs are:

This means your opportunity costs are:

Who Has the Comparative Advantage

Comparing the opportunity costs, it costs Jamie 0.8 Crabs to produce 1 Pineapple, whereas is costs you only 0.5 Crabs. This means:

You have the comparative advantage in producing Pineapples.

Remember that the 0.8 and 0.5 crabs represent the cost of pineapples in terms of crabs. It is similar to saying “It costs Jamie $0.80 to buy a Pineapple, it costs you $0.50, who should buy it?” In a PPF, cost is denoted in terms of the other good, not dollars.

Furthermore, it costs Jamie only 1.25 Pineapples to produce 1 Crab, whereas is costs you 2 Pineapples  This means:

Jamie has the comparative advantage in producing Crabs.

This is true for every point on our PPF. Now we will examine each of the points using this information.

In this combination, Jamie produces only Pineapples and you produce only Crabs. This situation is clearly inefficient since each player is producing a good the other can produce for less. By changing production and trading goods, both parties stand to benefit.

Realizing the previous points were inefficient, Jamie produces only Pineapples and you produce only Crabs. In this situation both players are producing only the good they have the comparative advantage in. This situation is certainly efficient, as there are no production changes that can be made that result in more than 40 Crabs, and 50 Pineapples.

What if we want 50 Crabs? Is there no way to produce this efficiently? There is. Point A/Point E is not the only efficient point possible. This is because of preferences. If in total, you and Jamie prefer only 40 Crabs, then Point A/ Point E would be the efficient point where you would produce, but if you and Jamie desire 50 Crabs, that would not be the preferred combination. If you desire 50 Crabs, then the person who has the comparative advantage in Crabs (in this case Jamie) should produce all 50 Crabs, or produce as many Crabs as possible. In this case, Jamie can only produce 40, which leaves the remaining 10 to be produced by you. Although Jamie could produce these 10 Crabs more efficiently, he is constrained by his production ability. This means that Point A/Point D is also an efficient combination of goods, since there is no way to acquire 50 Crabs which results in more than 30 Pineapples being produced.

Jamie Produces @ Point A, You Produce @ Point B

It should logically follow that this combination is also efficient. Even though you have the comparative advantage at producing Pineapples, if the Pineapples are poisonous and no one wants any, both you and Jamie will produce only Crabs! There is no other way to produce 65 Crabs where you will have any Pineapples left.

If at least one player is maximizing their comparative advantage, then the situation is efficient

In Topic 2, we have explored the production possibility model in depth, looking at a simplified version of trade and deepening our understanding of opportunity costs. Now, we can take our knowledge of basic economic modelling and our comprehension of costs and examine one of the most important of microeconomics: supply and demand.

Comparative Advantage
when a country can produce a good at a lower cost in terms of other goods; or, when a country has a lower opportunity cost of production
Gains from Trade
a country that can consume more than it can produce as a result of specialization and trade

1. The following question refers to the table below, which shows the maximum number of goods X and Y that producers A and B can produce in one day.

Which of the following statements in TRUE?

2. Consider the PPF diagram drawn below, for two countries that are free to trade with one another. 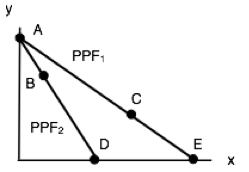 Which of the following production combinations is/are INEFFICIENT?

Assume that the two countries now begin to trade with one another. Which of the following will NOT occur (relative to the case with no trade).

4. Which of the following statements about production and trade is FALSE?

The following THREE questions refer to the diagram below, which illustrates the PPFs for two countries who are free to trade. 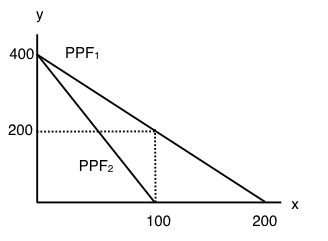 5. What is the marginal opportunity cost (MC) of producing good x in each country?

6. What is the marginal opportunity cost (MC) of producing good y in each country?

8. The diagram below illustrates the identical PPFs of two countries. 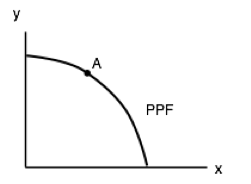 Initially, there is no trade allowed between the two countries, and each country produces at point A. If trade is opened up, which of the following will occur?

9. The table below shows the maximum amounts of coffee and salmon that Brazil and British Colombia can produce if they just produce one good.

10. The diagram below illustrates the PPFs for two countries that produce two goods. The two countries are free to trade with one another. 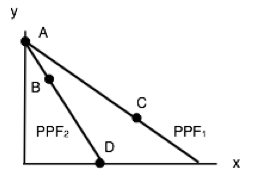 Which of the following production combinations are efficient?