Phototrophy (or “light eating”) refers to the process by which energy from the sun is captured and converted into chemical energy, in the form of ATP. The term photosynthesis is more precisely used to describe organisms that both convert sunlight into ATP (the “light reaction”) but then also proceed to use the ATP to fix carbon dioxide into organic compounds. These organisms are the photoautotrophs and are the major producers in the World’s food webs. Although photosynthesis is most commonly associated with plants, microbial photosynthesis is also a significant supplier of chemical energy for the food web’s consumers. Among the bacteria and archaea, there are also photoheterotrophs, organisms that convert sunlight into ATP but utilize pre-made organic compounds available in the environment. In the dark, these organisms typically grow as heterotrophs.

The simplest, and possibly most ancient, form of phototrophy involves a light-activated proton pump in the plasma membrane of some Proteobacteria and halophilic archaea: these are the rhodopsin proteins (proteorhodopsin and bacteriorhodopsin, respectively). The proteins contain an associated retinal molecule related to the one found in vertebrate eyes. When the retinal pigment absorbs light it causes the rhodopsin protein to undergo a conformational change, pumping a proton across the cell membrane and leading to the development of a proton motive force. These organisms all appear to also be heterotrophic, with the energy from the rhodopsin proteins supplementing that from cellular respiration. Proteorhodopsin-containing bacteria appear to be widespread in the oligotrophic ocean surface waters. The colour from the bacteriorhodopsin proteins of the halophilic archaea in salt flats and salterns (Figure 8.30) gives these waters a bright pink or red colour.

The more common types of phototrophs are those that transfer an energized electron from a photosynthetic pigment such as chlorophyll, to an electron transport system (ETS). These systems have the same general composition and function as those used for cellular respiration, and therefore generate proton motive force (PMF). A simplified photosystem is shown in Figure 8.31, where photons are absorbed by a chlorophyll or bacteriochlorophyll pigment, leading to photoexcitation of a pigment electron (an electronic transition, for those who remember their physics!). With the electron in a higher energy state, the pigment becomes photoionized, losing the electron to the first acceptor in the ETS. The electron moves spontaneously from carrier to carrier, based on increasing Eo‘ values. The combination of iron-containing carriers, with those that carry electrons and protons (e.g. the quinones) results in the generation of a PMF. The membrane-bound ATP synthase catalyzes the formation of ATP from ADP + Pi, and because the source of PMF results from phototrophy, rather than oxidation of a chemical energy source, this phosphorylation reaction is called “photophosphorylation” instead of “oxidative phosphorylation”. In the simplest situation, once depleted of energy, the electron cycles back to the special pair of chlorophyll/bacteriochlorophyll molecules in cyclic photophosphorylation. The process can then be repeated over and over again.

In order to maximize their ability to absorb light energy, phototrophs have increased membrane content. Depending upon the type of phototroph, the photosynthetic membranes are associated with, or invaginated from, the plasma membrane (or the inner membrane of the chloroplast). Embedded within the membranes are photosynthetic pigment molecules organized into one or more photosystems, where light energy is converted into chemical energy. Each photosystem is composed of a light-harvesting (antenna) complex and a reaction centre. The light-harvesting complex consists of multiple proteins and associated pigments that each may absorb light energy and, thus, become excited. This energy is transferred from one pigment molecule to another until eventually (after about a millionth of a second) it is delivered to the reaction centre. Up to this point, only energy—not electrons—has been transferred between molecules. The reaction centre pigment (e.g. chlorophyll) can undergo oxidation (photoionization) upon excitation, actually giving up an electron to the associated ETS.

The pigments associated with microbial photosystems include chlorophylls or the structurally similar bacteriochlorophylls, as well as accessory pigments (Figure 8.33). Cyanobacteria and algae utilize chlorophylls; these are green in colour, due to the fact that they absorb red and blue wavelengths (≈675 nm and 430 nm) and transmit green light. The purple and green bacteria use bacteriochlorophylls, which absorb wavelengths in the infrared (≈870 nm) and UV (≤400 nm) regions of the spectrum.

Carotenoids and phycobiliproteins are accessory pigments that help maximize light absorption. They are fluorescent molecules, absorbing light of intermediate wavelengths and reemitting the light at the longer wavelengths absorbed by the chlorophyll/bacteriochlorophyll.  Carotenoids, which absorb blue light (400-550 nm), are typically yellow, orange, or red in colour and are found in all phototrophs. The phycobiliproteins are found in the cyanobacteria and certain algae. They can be split in two groups: phycoerythrin, which transmits a red colour, and phycocyanin, which transmits a blue colour. The accessory pigments also serve a protective function for the organism by acting as an antioxidant.

As shown in Table 8.5, the species-specific combination of different photosystem pigments allows different phototrophs to occupy the same environment without competing with one another. Each species is optimized for harvesting the wavelengths of light to which it is commonly exposed, leading to stratification of microbial communities in aquatic and soil ecosystems by light quality and penetration, as well as other environmental conditions. These organisms typically have structures that also help them move towards, and remain in, those regions of the euphotic zone (the zone exposed to sunlight) where conditions are optimal. Most commonly, this involves phototaxis (see Unique Characteristics of Prokaryotic Cells) via cell surface receptors and flagella. However, it may also involve gas vesicles that alter the buoyancy of the organism, for example in the archaeon Halobacterium salinarum (see Archaea). The species-specificity of photosynthetic membrane structures and absorption spectra helps identify the phototrophs, just as the ability to utilize different organic energy sources is used to help identify the heterotrophs.

Table 8.5. Summary of different bacterial and archaeal phototrophs and their photosystems. 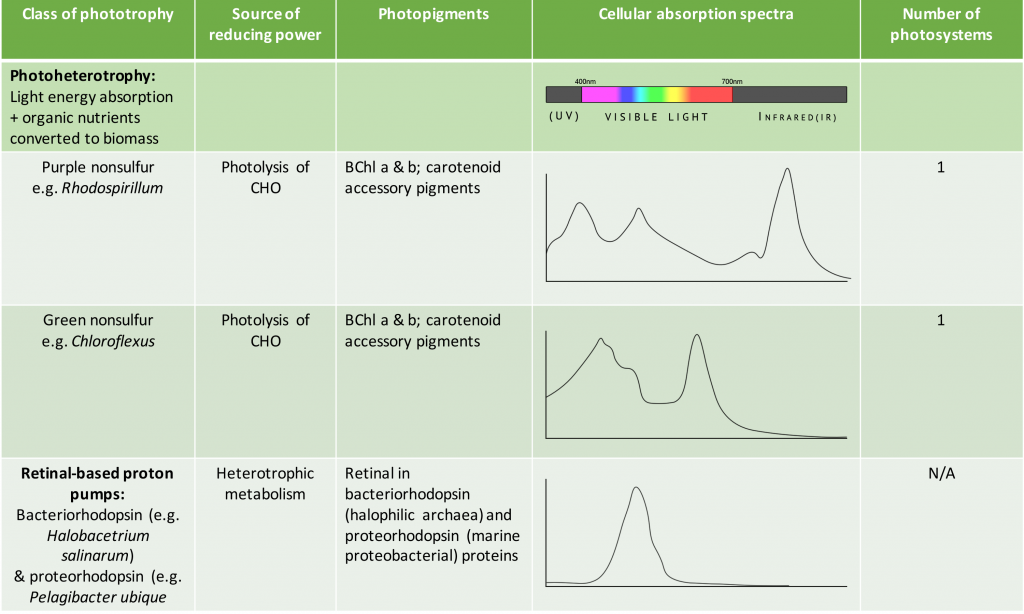 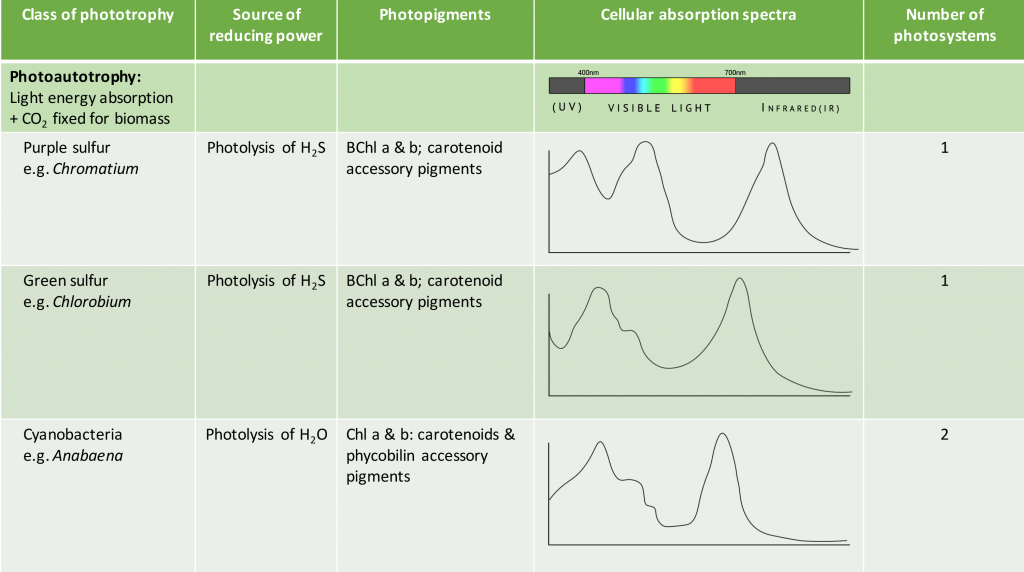 The purple phototrophs are all Gram negative proteobacteria. They have a single photosystem with bacteriochlorophyll, allowing them to use cyclic photophosphorylation as described above for the formation of ATP. Upon absorption of a photon of light, the reaction centre of purple bacteria (known as P870, based on one of its wavelengths of maximum absorption) becomes a strong reducing agent, with an

of -1.0V. Electrons are transferred through the chain by reducing quinones to quinols and these, in turn, reduce the Fe3+ of the cytochrome heme group to Fe2+, with a resultant extrusion of protons to the periplasm. Instead of cycling back to the reaction centre pigment, as shown in Figure 8.34, electrons can instead be directed from the quinols through a branch to NAD(P). Because the reduction potential of the quinol is lower (i.e. a more positive

), than that of NAD(P), autotrophic purple bacteria must use reverse electron flow, as previously discussed in the section on lithotrophy; they drive electrons in an endergonic direction (i.e. up the electron tower), using energy from the proton motive force. Photolysis of H2S or elemental sulphur in the purple sulphurs then replenishes the electrons that were diverted to NAD(P). Various sulphur byproducts are produced, including elemental sulphur. These sulphur granules typically accumulate inside the cells, and can be visualized in the cytoplasm. 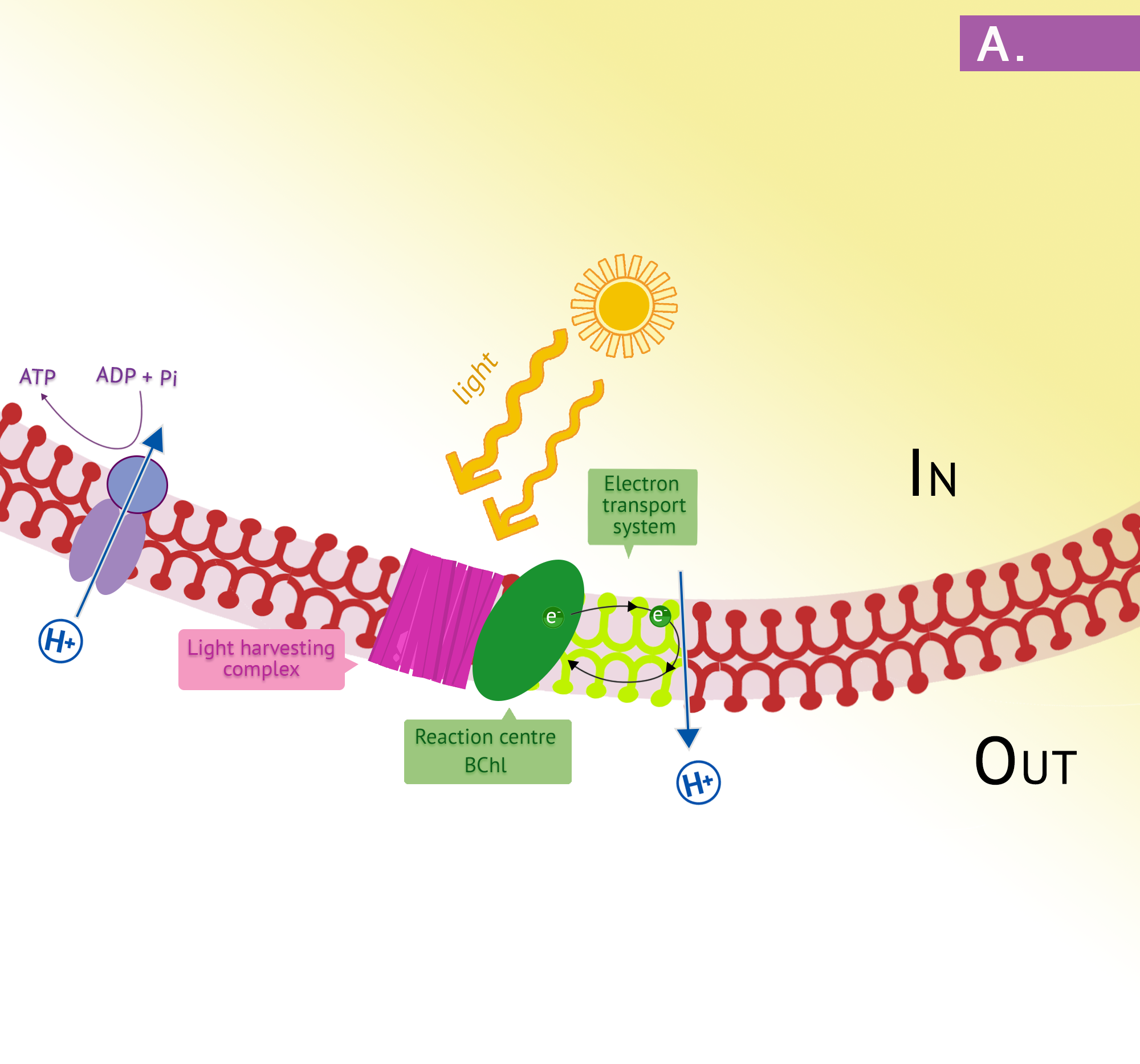 In the presence of organic compounds, the purple bacteria often exist as photoheterotrophs, utilizing cyclic photophosphorylation to generate ATP and getting their organic compounds from the environment. This eliminates the need for using reverse electron flow, an energetically unfavourable process, as well as the need for external electron donors. The membranes of the purple phototrophs form stacked disc-shaped structures called thylakoids. Unlike the thylakoids of the eukaryotic chloroplast, the embedded ATP synthase are oriented so that the catalytic “knob” is in the cytoplasm.

Green phototrophic bacteria also utilize a single photosystem with bacteriochlorophyll for cyclic photophosphorylation in the production of ATP. The antennae complexes of the green phototrophs are contained in organelle-like membrane enclosed vesicles called chlorosomes (Figure 8.35).[1] The green photosystem is best characterized in members of the phylum Chlorobium: these are the green sulphur bacteria. These bacteria are photoautotrophs and the same photosystem is used for generation of reducing power, by periodically drawing off electrons to NAD+. The use of reverse electron flow is unnecessary, however, since the initial carrier, ferredoxin (Fd) has an E0’ with a more negative reduction potential than NAD(P). Electrons are replenished through photolysis of H2S or thiosulphate, but unlike the purple sulphurs, sulphur granule byproducts do not accumulate in the cytoplasm.

Bacteria in the phylum Chloroflexi have traditionally been referred to as the green nonsulphur bacteria. They are less well characterized, with a small number having been isolated. They are often filamentous and thermophilic, typically living as photoheterotrophs, and as heterotrophs in the dark. 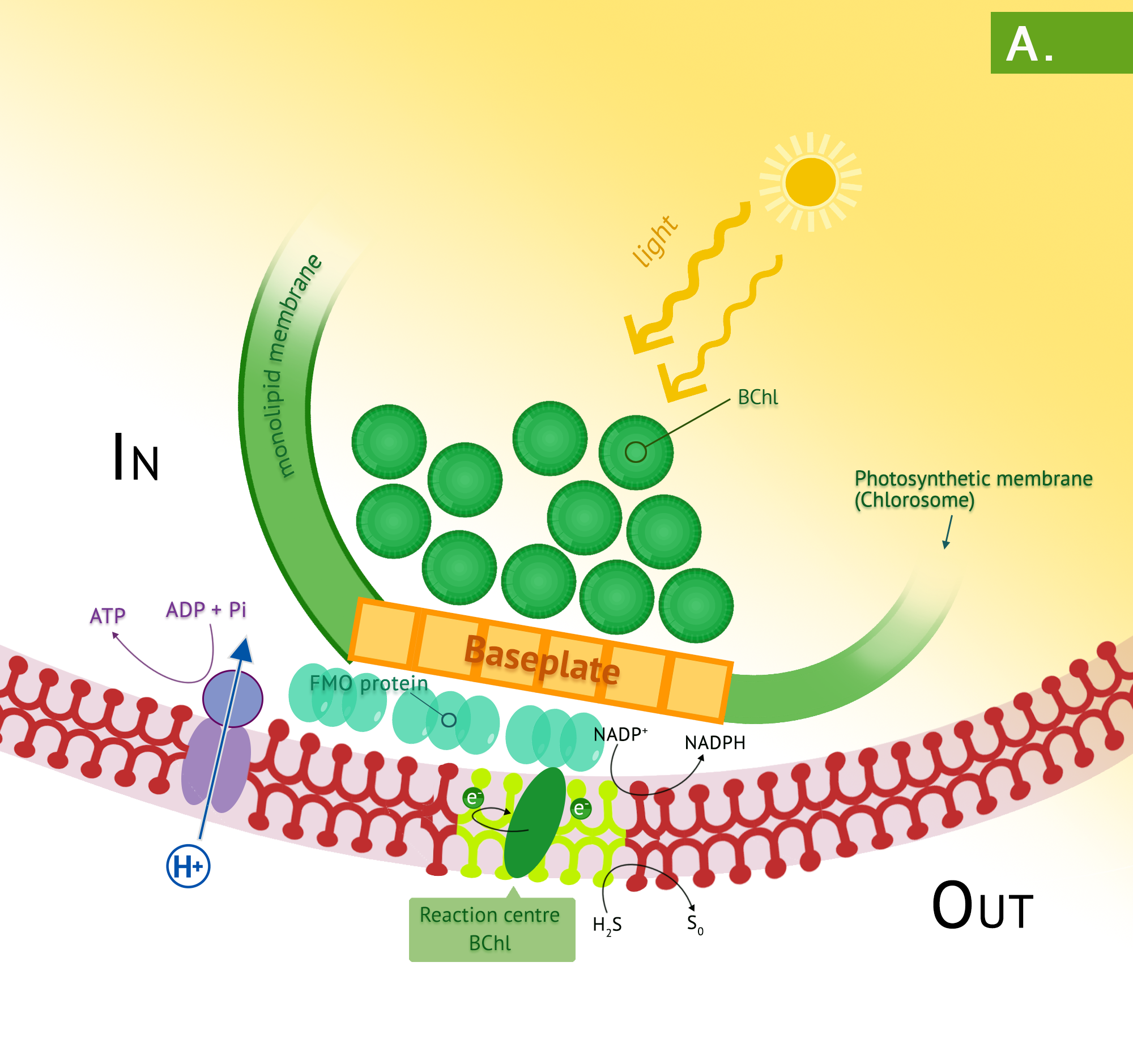 The Cyanobacteria are the only bacteria that produce oxygen. It is because of their ability to photolyse water, releasing oxygen, that Earth’s atmosphere eventually experienced what has been called “The Great Oxygenation Event”, around 2 billion years ago. Prior to that, Earth’s atmosphere was anaerobic, as was microbial life. Cyanobacteria are a large and diverse taxon. They exist in Arctic waters and sea ice, in hot springs, freshwater and throughout the World’s oceans. They may be unicellular or filamentous, may fix nitrogen in addition to carbon, and along with algae, are major primary producers in the biosphere. The photosynthetic membranes form thylakoids and contain chlorophyll (Figure 8.36).

The eukaryotic chloroplasts also contain thylakoids and chlorophyll: not surprising, given their endosymbiotic origin and shared ancestry with the cyanobacteria (see Foundations of Modern Cell Theory). The chloroplasts are enclosed by a double membrane with inner and outer layers. A stack of thylakoids is called a granum, and the space surrounding the granum within the chloroplast is called stroma (Figure 8.37). Unlike the cyanobacteria, the catalytic “knob” of the thylakoid-embedded ATP synthase faces the stroma rather than the cytoplasm.

Unlike the anoxygenic phototrophs, cyanobacteria and chloroplasts have two photosystems. Both photosystems are excited by light energy simultaneously. If the cell requires both ATP and NADPH for biosynthesis, then it will carry out noncyclic photophosphorylation. Upon passing of the PSII reaction centre electron to the ETS that connects PSII and PSI, the lost electron from the PSII reaction centre is replaced by splitting water. The excited PSI reaction centre electron is used to reduce NADP+ to NADPH and is replaced by the electron exiting the ETS. The flow of electrons in this way is called the Z-scheme (Figure 8.38).

If a cell’s need for ATP is significantly greater than its need for NADPH, it may bypass the production of reducing power through cyclic photophosphorylation. Only PSI is used during cyclic photophosphorylation; the high-energy electron of the PSI reaction centre is passed to an ETS carrier and then ultimately returns to the oxidized PSI reaction centre pigment, thereby reducing it.