Ask most people “What are the major requirements for life?” and the answers are likely to include water and oxygen. Few would argue about the need for water, but what about oxygen? Can there be life without oxygen?

The answer is that molecular oxygen (O2) is not always needed. The earliest signs of life are dated to a period when conditions on earth were highly reducing and free oxygen gas was essentially nonexistent. Only after cyanobacteria started releasing oxygen as a byproduct of photosynthesis did oxygen levels increase in the atmosphere. This “Great Oxygenation Event” has also been called the Oxygen Revolution, caused a massive extinction. Most organisms could not survive the powerful oxidative properties of reactive oxygen species (ROS), highly unstable ions and molecules derived from partial reduction of oxygen that can damage virtually any macromolecule or structure with which they come in contact. Singlet oxygen (O2•), superoxide (O2−), peroxides (H2O2), hydroxyl radical (OH•), and hypochlorite ion (OCl−), the active ingredient of household bleach, are all examples of ROS. The organisms that were able to detoxify reactive oxygen species harnessed the high electronegativity of oxygen to produce free energy for their metabolism and thrived in the new environment.

Many ecosystems are still free of molecular oxygen. Some are found in extreme locations, such as deep in the ocean or in earth’s crust; others are part of our everyday landscape, such as marshes, bogs, and sewers. Within the bodies of humans and other animals, regions with little or no oxygen provide an anaerobic environment for microorganisms. (Figure 9.28).

We can easily observe different requirements for molecular oxygen by growing bacteria in thioglycolate tube cultures. A test-tube culture starts with autoclaved thioglycolate medium containing a low percentage of agar to allow motile bacteria to move throughout the medium. Thioglycolate has strong reducing properties and autoclaving flushes out most of the oxygen. The tubes are inoculated with the bacterial cultures to be tested and incubated at an appropriate temperature. Over time, oxygen slowly diffuses throughout the thioglycolate tube culture from the top. Bacterial density increases in the area where oxygen concentration is best suited for the growth of that particular organism.

The growth of bacteria with varying oxygen requirements in thioglycolate tubes is illustrated in Figure 9.29. In tube A, all the growth is seen at the top of the tube. The bacteria are obligate (strict) aerobes that cannot grow without an abundant supply of oxygen. Tube B looks like the opposite of tube A. Bacteria grow at the bottom of tube B. Those are obligate anaerobes, which are killed by oxygen. Tube C shows heavy growth at the top of the tube and growth throughout the tube, a typical result with facultative anaerobes. Facultative anaerobes are organisms that thrive in the presence of oxygen but also grow in its absence by relying on fermentation or anaerobic respiration, if there is a suitable electron acceptor other than oxygen and the organism is able to perform anaerobic respiration. The energy yield from anaerobic growth is less than with aerobic growth, so cells do not grow to the same density below the top of the tube. The aerotolerant anaerobes in tube D are indifferent to the presence of oxygen. They do not use oxygen because they usually have a fermentative metabolism but they are not harmed by the presence of oxygen as obligate anaerobes are. The growth pattern in tube E is that of microaerophiles. They require a minimum level of oxygen for growth, about 1%–10%, well below the 21% found in the atmosphere.

Many obligate anaerobes are found in the environment where anaerobic conditions exist, such as in deep sediments of soil, still waters, and at the bottom of the deep ocean where there is no photosynthetic life. Anaerobic conditions also exist naturally in the intestinal tract of animals. Obligate anaerobes, mainly Bacteroidetes, represent a large fraction of the microbes in the human gut. Transient anaerobic conditions exist when tissues are not supplied with blood circulation; they die and become an ideal breeding ground for obligate anaerobes. Another type of obligate anaerobe encountered in the human body is the gram-positive, rod-shaped Clostridium spp. Their ability to form endospores allows them to survive in the presence of oxygen. One of the major causes of health-acquired infections is C. difficile, known as C. diff. Prolonged use of antibiotics for other infections increases the probability of a patient developing a secondary C. difficile infection. Antibiotic treatment disrupts the balance of microorganisms in the intestine and allows the colonization of the gut by C. difficile, causing a significant inflammation of the colon.

Other clostridia responsible for serious infections include C. tetani, the agent of tetanus, and C. perfringens, which causes gas gangrene. In both cases, the infection starts in necrotic tissue (dead tissue that is not supplied with oxygen by blood circulation). This is the reason that deep puncture wounds are associated with tetanus. When tissue death is accompanied by lack of circulation, gangrene is always a danger.

The study of obligate anaerobes requires special equipment. Obligate anaerobic bacteria must be grown under conditions devoid of oxygen. The most common approach is culture in an anaerobic jar (Figure 9.30). Anaerobic jars include chemical packs that remove oxygen and release carbon dioxide (CO2). An anaerobic chamber is an enclosed box from which all oxygen is removed. Gloves sealed to openings in the box allow handling of the cultures without exposing the culture to air (Figure 9.30).

Staphylococci and Enterobacteriaceae are examples of facultative anaerobes. Staphylococci are found on the skin and upper respiratory tract. Enterobacteriaceae are found primarily in the gut and upper respiratory tract but can sometimes spread to the urinary tract, where they are capable of causing infections. It is not unusual to see mixed bacterial infections in which the facultative anaerobes use up the oxygen, creating an environment for the obligate anaerobes to flourish.

The so-called lactic acid bacteria, lactobacilli and streptococci, are examples of aerotolerant anaerobes. They are both found in the oral microbiota. Campylobacter jejuni, which causes gastrointestinal infections, is an example of a microaerophile and is grown under low-oxygen conditions.

CASE IN POINT: An Unwelcome Anaerobe

Charles is a retired bus driver who developed type 2 diabetes over 10 years ago. Since his retirement, his lifestyle has become very sedentary and he has put on a substantial amount of weight. Although he has felt tingling and numbness in his left foot for a while, he has not been worried because he thought his foot was simply “falling asleep.” Recently, a scratch on his foot does not seem to be healing and is becoming increasingly ugly. Because the sore did not bother him much, Charles figured it could not be serious until his daughter noticed a purplish discolouration spreading on the skin and oozing (Figure 9.31). When he was finally seen by his physician, Charles was rushed to the operating room. His open sore, or ulcer, is the result of a diabetic foot.

The concern here is that gas gangrene may have taken hold in the dead tissue. The most likely agent of gas gangrene is Clostridium perfringens, an endospore-forming, gram-positive bacterium. It is an obligate anaerobe that grows in tissue devoid of oxygen. Since dead tissue is no longer supplied with oxygen by the circulatory system, the dead tissue provides pockets of ideal environment for the growth of C. perfringens.

A surgeon examines the ulcer and radiographs of Charles’s foot and determines that the bone is not yet infected. The wound will have to be surgically debrided (debridement refers to the removal of dead and infected tissue) and a sample sent for microbiological lab analysis, but Charles will not have to have his foot amputated. Many diabetic patients are not so lucky. In 2008, nearly 70,000 diabetic patients in the United States lost a foot or limb to amputation, according to statistics from the Centers for Disease Control and Prevention.[1]

Aerobic respiration explains the need for oxygen, and the higher growth rates under aerobic conditions. But wherever there is O2, there are also oxygen by-products or reactive oxygen species (ROS), that must be detoxified. Even organisms that do not use aerobic respiration need some way to break down some of the ROS that may form from molecular oxygen. Three main enzymes break down those toxic byproducts: superoxide dismutase, peroxidase, and catalase. Each one catalyzes a different reaction. Reactions of the type seen in Reaction 1 are catalyzed by peroxidases.

In these reactions, an electron donor (reduced compound; e.g., reduced nicotinamide adenine dinucleotide [NADH]) oxidizes hydrogen peroxide, or other peroxides, to water. The enzymes play an important role by limiting the damage caused by peroxidation of membrane lipids. Reaction 2 is mediated by the enzyme superoxide dismutase (SOD) and breaks down the powerful superoxide anions generated by aerobic metabolism:

The enzyme catalase converts hydrogen peroxide to water and oxygen as shown in Reaction 3.

Obligate anaerobes usually lack all three enzymes. Aerotolerant anaerobes do have SOD but detoxify hydrogen peroxide using peroxidase instead of catalase. Reaction 3, shown occurring in Figure 9.32, is the basis of a useful and rapid test to distinguish the Gram positive streptococci, which are aerotolerant and produce peroxidase, from the Gram positive staphylococci, which are facultative anaerobes and produce catalase. A sample of culture rapidly mixed in a drop of 3% hydrogen peroxide will release bubbles if the culture is catalase positive, but the peroxidase reaction (#1, above) does not.

Bacteria that grow best in a higher concentration of CO2 and a lower concentration of oxygen than present in the atmosphere are called capnophiles. One common approach to grow capnophiles is to use a candle jar. A candle jar consists of a jar with a tight-fitting lid that can accommodate the cultures and a candle. After the cultures are added to the jar, the candle is lit and the lid closed. As the candle burns, it consumes most of the oxygen present and releases CO2.

The health-care provider who saw Jeni was concerned primarily because of her pregnancy. Her condition enhances the risk for infections and makes her more vulnerable to those infections. The immune system is down-regulated during pregnancy, and pathogens that cross the placenta can be very dangerous for the fetus. A note on the provider’s order to the microbiology lab mentions a suspicion of infection by Listeria monocytogenes, based on the signs and symptoms exhibited by the patient.

Jeni’s blood samples are streaked directly on sheep blood agar, a medium containing tryptic soy agar enriched with 5% sheep blood. (Blood is considered sterile; therefore, competing microorganisms are not expected in the medium.) The inoculated plates are incubated at 37 °C for 24 to 48 hours. Small greyish colonies surrounded by a clear zone emerge. Such colonies are typical of Listeria and other pathogens such as streptococci; the clear zone surrounding the colonies indicates complete lysis of blood in the medium, referred to as beta-hemolysis (Figure 9.33). When tested for the presence of catalase, the colonies give a positive response, eliminating Streptococcus as a possible cause. Furthermore, a Gram stain shows short gram-positive bacilli. Cells from a broth culture grown at room temperature displayed the tumbling motility characteristic of Listeria (Figure 9.33). All of these clues lead the lab to positively confirm the presence of Listeria in Jeni’s blood samples. 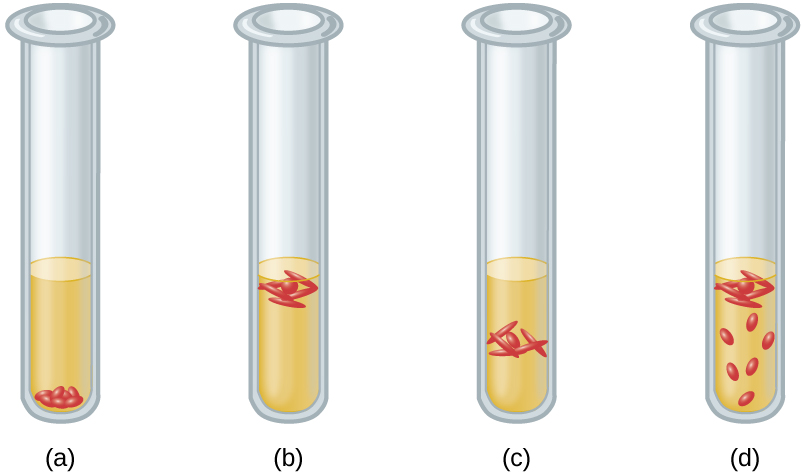