Penny is a 16-year-old student who visited her doctor, complaining about an itchy skin rash. She had a history of allergic episodes. The doctor looked at her sun-tanned skin and asked her if she switched to a different sunscreen. She said she had, so the doctor diagnosed an allergic eczema. The symptoms were mild so the doctor told Penny to avoid using the sunscreen that caused the reaction and prescribed an over-the-counter moisturizing cream to keep her skin hydrated and to help with itching.

The most abundant elements in cells are carbon (C), hydrogen (H), oxygen (O), nitrogen (N), phosphorous (P), and sulphur (S). We call these elements major macronutrients, and they account for about 99% of the dry weight of cells. Some elements, such as sodium (Na), potassium (K), magnesium (Mg), zinc (Zn), iron (Fe), calcium (Ca), molybdenum (Mo), copper (Cu), cobalt (Co), manganese (Mn), or vanadium (Va), are required by some cells in very small amounts and are called micronutrients or trace elements. All of these elements are essential to the function of many biochemical reactions, and, therefore, are essential to life.

The four most abundant elements in living matter (C, N, O, and H) have low atomic numbers and are thus light elements capable of forming strong bonds with other atoms to produce molecules (Figure 7.2). Carbon forms four chemical bonds, whereas nitrogen forms three, oxygen forms two, and hydrogen forms one. When bonded together within molecules, oxygen, sulphur, and nitrogen often have one or more “lone pairs” of electrons that play important roles in determining many of the molecules’ physical and chemical properties (see Appendix A). These traits in combination permit the formation of a vast number of diverse molecular species necessary to form the structures and enable the functions of living organisms.

Inorganic compounds make up 1%–1.5% of a living cell’s mass. They are small, simple compounds that play important roles in the cell, although they do not form cell structures. Most of the carbon found in organic molecules originates from inorganic carbon sources such as carbon dioxide captured via carbon fixation by microorganisms.

Organic molecules in organisms are generally larger and more complex than inorganic molecules. Their carbon skeletons are held together by covalent bonds. They form the cells of an organism and perform the chemical reactions that facilitate life. All of these molecules, called biomolecules because they are part of living matter, contain carbon, which is the building block of life. Carbon is a very unique element in that it has four valence electrons in its outer orbitals and can form four single covalent bonds with up to four other atoms at the same time (see Appendix A). These atoms are usually oxygen, hydrogen, nitrogen, sulphur, phosphorous, and carbon itself; the simplest organic compound is methane, in which carbon binds only to hydrogen (Figure 7.3).

As a result of carbon’s unique combination of size and bonding properties, carbon atoms can bind together in large numbers, thus producing a chain or carbon skeleton. The carbon skeleton of organic molecules can be straight, branched, or ring shaped (cyclic). Organic molecules are built on chains of carbon atoms of varying lengths; most are typically very long, which allows for a huge number and variety of compounds. No other element has the ability to form so many different molecules of so many different sizes and shapes.

Molecules with the same atomic makeup but different structural arrangement of atoms are called isomers. The concept of isomerism is very important in chemistry because the structure of a molecule is always directly related to its function. Slight changes in the structural arrangements of atoms in a molecule may lead to very different properties. Chemists represent molecules by their structural formula, which is a graphic representation of the molecular structure, showing how the atoms are arranged. Compounds that have identical molecular formulas but differ in the bonding sequence of the atoms are called structural isomers. The monosaccharides glucose, galactose, and fructose all have the same molecular formula, C6H12O6, but we can see from Figure 7.4 that the atoms are bonded together differently.

Isomers that differ in the spatial arrangements of atoms are called stereoisomers; one unique type is enantiomers. The properties of enantiomers were originally discovered by Louis Pasteur in 1848 while using a microscope to analyze crystallized fermentation products of wine. Enantiomers are molecules that have the characteristic of chirality, in which their structures are non-superimposable mirror images of each other. Chirality is an important characteristic in many biologically important molecules, as illustrated by the examples of structural differences in the enantiomeric forms of the monosaccharide glucose or the amino acid alanine (Figure 7.5).

Many organisms are only able to use one enantiomeric form of certain types of molecules as nutrients and as building blocks to make structures within a cell. Some enantiomeric forms of amino acids have distinctly different tastes and smells when consumed as food. For example, L-aspartame, commonly called aspartame, tastes sweet, whereas D-aspartame is tasteless. Drug enantiomers can have very different pharmacologic affects. For example, the compound methorphan exists as two enantiomers, one of which acts as an antitussive (dextromethorphan, a cough suppressant), whereas the other acts as an analgesic (levomethorphan, a drug similar in effect to codeine).

Enantiomers are also called optical isomers because they can rotate the plane of polarized light. Some of the crystals Pasteur observed from wine fermentation rotated light clockwise whereas others rotated the light counterclockwise. Today, we denote enantiomers that rotate polarized light clockwise (+) as d forms, and the mirror image of the same molecule that rotates polarized light counterclockwise (−) as the l form. The d and l labels are derived from the Latin words dexter (on the right) and laevus (on the left), respectively. These two different optical isomers often have very different biological properties and activities. Certain species of moulds, yeast, and bacteria, such as Rhizopus, Yarrowia, and Lactobacillus spp., respectively, can only metabolize one type of optical isomer; the opposite isomer is not suitable as a source of nutrients. Another important reason to be aware of optical isomers is the therapeutic use of these types of chemicals for drug treatment, because some microorganisms can only be affected by one specific optical isomer.

In addition to containing carbon atoms, biomolecules also contain functional groups—groups of atoms within molecules that are categorized by their specific chemical composition and the chemical reactions they perform, regardless of the molecule in which the group is found. Some of the most common functional groups are listed in Table 7.1. In the formulas, the symbol R stands for “residue” and represents the remainder of the molecule. R might symbolize just a single hydrogen atom or it may represent a group of many atoms. Notice that some functional groups are relatively simple, consisting of just one or two atoms, while some comprise two of these simpler functional groups. For example, a carbonyl group is a functional group composed of a carbon atom double bonded to an oxygen atom: C=O. It is present in several classes of organic compounds as part of larger functional groups such as ketones, aldehydes, carboxylic acids, and amides. In ketones, the carbonyl is present as an internal group, whereas in aldehydes it is a terminal group. 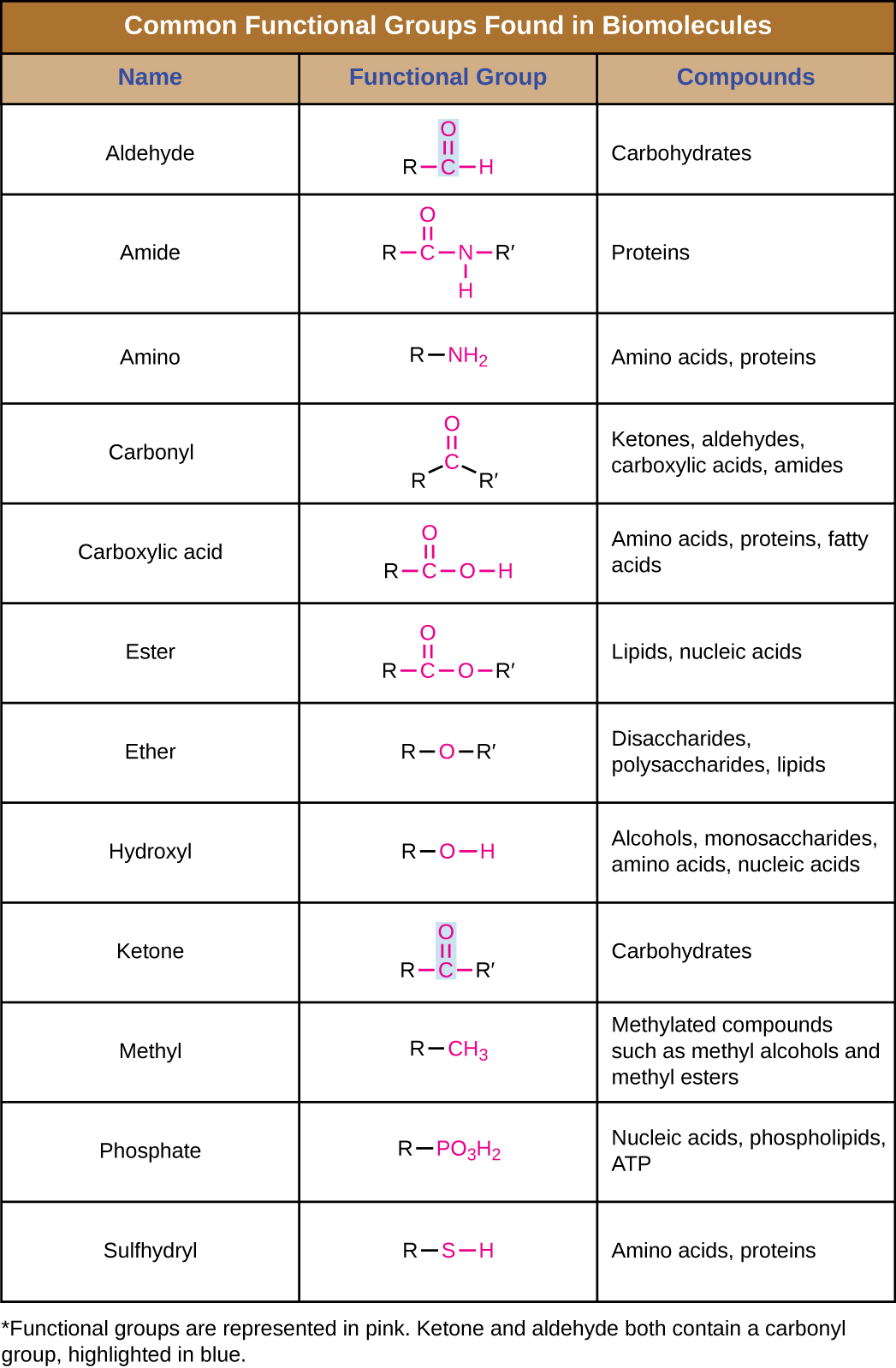 Carbon chains form the skeletons of most organic molecules. Functional groups combine with the chain to form biomolecules. Because these biomolecules are typically large, we call them macromolecules. Many biologically relevant macromolecules are formed by linking together a great number of identical, or very similar, smaller organic molecules. The smaller molecules act as building blocks and are called monomers, and the macromolecules that result from their linkage are called polymers. Cells and cell structures include four main groups of carbon-containing macromolecules: polysaccharides, proteins, lipids, and nucleic acids. The first three groups of molecules will be studied throughout this chapter. The biochemistry of nucleic acids will be discussed in Biochemistry of the Genome.

Figure 7.6 shows dehydration synthesis of glucose binding together to form maltose and a water molecule. Table 7.2 summarizes macromolecules and some of their functions.

Table 7.2 – Some Functions of Macromolecules 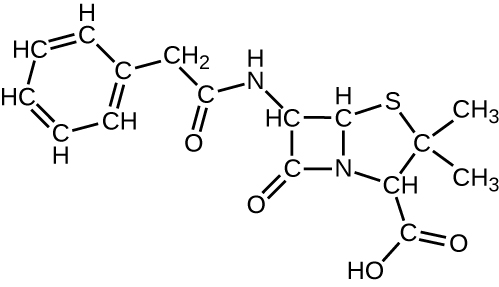