The study of microorganisms is greatly facilitated if we are able to culture them, that is, to keep reproducing populations alive under laboratory conditions. Culturing many microorganisms is challenging because of highly specific nutritional and environmental requirements, and the diversity of these requirements among different species. Another problem is the “patchiness” of the physicochemical conditions of an environment – that is conditions may change over microscopic distances. So although the golden rule for laboratory cultivation is to try to replicate the conditions from the natural environment, this is not always effective and cultivation conditions are always selective.

The majority of dry weight of cells comes from organic molecules. Organic molecules contain, minimally, carbon and hydrogen, however oxygen is typically also present. In addition to requiring a source of carbon, hydrogen and oxygen to build these molecules, cells need a source of three other elements at relatively high levels: nitrogen, phosphorus, and sulphur. In particular, cells need nitrogen for the formation of proteins, nucleic acids, and a few other cell components. Phosphorous  is also a crucial component of nucleic acids; it is also required for the synthesis of phospholipids, and adenosine triphosphate or ATP. Sulphur is necessary for a few amino acids, as well as several vitamins. Required at slightly lower levels are cations: potassium (K+), which is needed for enzymes, and magnesium ions (Mg2+), which is used to stabilize ribosomes and membranes, iron (Fe2+) which is needed for electron transport systems, as well as for enzymes and calcium (Ca2+). Collectively these elements are referred to as the macronutrients. These can be further differentiated into major macronutrients (C, H, O, N, P, S) which have traditionally been added to microbiological growth media at g/L amounts, and minor macronutrients (K+, Mg2+ and Fe), traditionally added at mg/L amounts. Micronutrients (e.g.cobalt, copper, manganese, zinc) are also required, but at ~1000-fold lower levels. These are present as contaminants of glassware and water and are typically structural components of enzymes or cofactors.

The traditional g/L amounts of major macronutrients support the growth of many bacteria and archaea, it is often toxic to isolates from marine environments where, beyond the coastal areas, nutrient concentrations are extremely limiting. Such conditions are characterized as oligotrophic, and the organisms that require such low nutrient levels are oligotrophs. This is in contrast to the copiotrophs. Cultivation of the oligotrophs has been somewhat challenging as they have very low metabolic rates, therefore slow generation times. In fact, it has taken years to cultivate some of the most numerous marine taxa, with success coming once sterilized sea water was used as a growth medium.

Some microbes can synthesize certain organic molecules that they need from scratch, as long as they are provided with a carbon source and inorganic salts. Other microbes require that certain organic compounds exist within their environment. These organic molecules essential for growth are called growth factors and fall into three major categories: 1) amino acids (building blocks of protein), 2) purines and pyrimidines (building blocks of nucleic acid), and 3) vitamins (enzyme cofactors). Growth factor requirements arise due to ancestral mutations in the biosynthetic genes for the end product and are often associated with bacteria that are intracellular parasites, or closely associated with an animal host. For these organisms, the host provides the necessary growth factor(s), and active transport is more energetically efficient than biosynthesis. Growth factor requirements are exploited as a means of selection in the genetics laboratory. Such strains are called “auxotrophs” (not to be confused with autotrophs) and the biosynthetic ability is often “rescued” upon successful creation of a recombinant organism.

The number of available media to grow bacteria is considerable. Some media are considered general all-purpose media and support growth of a large variety of organisms. A prime example of an all-purpose medium is tryptic soy broth (TSB; Table 9.1). Specialized media are used in the identification of bacteria and are supplemented with dyes, pH indicators, or antibiotics. One type, enriched media, contains growth factors, vitamins, and other essential nutrients to promote the growth of fastidious organisms, organisms that cannot make certain nutrients and require them to be added to the medium. Chocolate agar, which actually contains partially haemolyzed red blood cells rather than chocolate, is used to grow human pathogens Haemophilus and Neisseria (Figure 9.25). 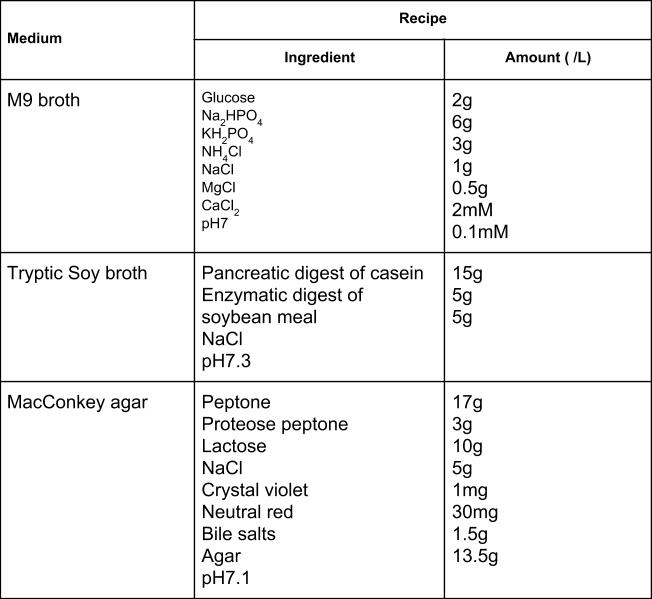 When the complete chemical composition of a medium is known, it is called a chemically defined medium. For example, in M9 medium (Table 9.1), all individual chemical components are identified and the exact amounts of each is known. In complex media, which contain extracts and digests of yeasts, meat, or plants, the precise chemical composition of the medium is not known. Amounts of individual components are undetermined and variable. Nutrient broth, tryptic soy broth, and chocolate agar, are all examples of complex media.

Selective media are used for the growth of only selected microorganisms. An example of a selective medium is MacConkey agar (Table 9.1 & Figure 9.26). It contains bile salts and crystal violet, which interfere with the growth of many gram-positive bacteria and favour the growth of Gram-negative bacteria, particularly the Enterobacteriaceae. These species are commonly named enterics, reside in the intestine, and are adapted to the presence of bile salts.

Enrichment cultures foster the preferential growth of a desired microorganism that represents a fraction of the organisms present in an inoculum. For example, if we want to isolate bacteria that break down crude oil, hydrocarbonoclastic bacteria, sequential subculturing in a medium that supplies carbon only in the form of crude oil will enrich the cultures with oil-degrading bacteria. Alternatively, to isolate antibiotic resistant species from a mixed culture,  that antibiotic can be added to the medium in order to non-resistant cells from growing. In the genetics lab, media lacking a specific amino acid growth factor, such as proline, in conjunction with E. coli unable to synthesize it (i.e. auxotrophic for proline), were commonly used by geneticists before the emergence of genomics to map bacterial chromosomes.Differential/indicator media distinguish one microorganism type from another growing on the same media. This type of media uses the biochemical characteristics of a microorganism growing in the presence of specific nutrients or indicators (such as neutral red, phenol red, eosin y, or methylene blue) added to the medium to visibly indicate the defining characteristics of a microorganism.Many involve a change in the colour of the colonies or the colour of the medium. These colour changes are the result of end products created by interaction of bacterial enzymes with differential substrates in the medium or, in the case of hemolytic reactions, the lysis of red blood cells in the medium. MacConkey agar is both selective and differential, allowing the differentiation between lactose-fermenting Gram negative bacteria and those that cannot ferment the disaccharide (Figure 9.26). The lactose fermenters produce acid, which turns the neutral red pH indicator in the medium medium red or pink, which in turns the colonies the same colour.  This medium is used to distinguish between two closely-related members of the Enterobacteriaceae family: E. coli and Salmonella. Both are Gram negative, motile rods that cause food-borne infections. Only E. coli ferments lactose. Selective and differential media can be combined and play an important role in the identification of bacteria by biochemical methods.

Compare the compositions of EZ medium and sheep blood agar.

CASE IN POINT: The End-of-Year Picnic

The microbiology department is celebrating the end of the school year in May by holding its traditional picnic on the green. The speeches drag on for a couple of hours, but finally all the faculty and students can dig into the food: chicken salad, tomatoes, onions, salad, and custard pie. By evening, the whole department, except for two vegetarian students who did not eat the chicken salad, is stricken with nausea, vomiting, retching, and abdominal cramping. Several individuals complain of diarrhoea. One patient shows signs of shock (low blood pressure). Blood and stool samples are collected from patients, and an analysis of all foods served at the meal is conducted.

Blood samples from the patients showed no signs of bacterial infection, which further suggests that this was a case of intoxication. Since intoxication is due to secreted toxins, bacteria are not usually detected in blood or stool samples. MacConkey agar and sorbitol-MacConkey agar plates and xylose-lysine-deoxycholate (XLD) plates were inoculated with stool samples and did not reveal any unusually coloured colonies, and no black colonies or white colonies were observed on XLD. All lactose fermenters on MacConkey agar also ferment sorbitol. These results ruled out common agents of food-borne illnesses: E. coli, Salmonella spp., and Shigella spp.

Analysis of the chicken salad revealed an abnormal number of gram-positive cocci arranged in clusters (Figure 9.27). A culture of the gram-positive cocci releases bubbles when mixed with hydrogen peroxide. The culture turned mannitol salt agar yellow after a 24-hour incubation.

All the tests point to Staphylococcus aureus as the organism that secreted the toxin. Samples from the salad showed the presence of gram-positive cocci bacteria in clusters. The colonies were positive for catalase. The bacteria grew on mannitol salt agar fermenting mannitol, as shown by the change to yellow of the medium. The pH indicator in mannitol salt agar is phenol red, which turns to yellow when the medium is acidified by the products of fermentation.

The toxin secreted by S. aureus is known to cause severe gastroenteritis. The organism was probably introduced into the salad during preparation by the food handler and multiplied while the salad was kept in the warm ambient temperature during the speeches.