Many fungal infections of the skin involve fungi that are found in the normal skin microbiota. Some of these fungi can cause infection when they gain entry through a wound; others mainly cause opportunistic infections in immunocompromised patients. Other fungal pathogens primarily cause infection in unusually moist environments that promote fungal growth; for example, sweaty shoes, communal showers, and locker rooms provide excellent breeding grounds that promote the growth and transmission of fungal pathogens.

A group of cutaneous mycoses called tineas are caused by dermatophytes, fungal moulds that require keratin, a protein found in skin, hair, and nails, for growth. There are three genera of dermatophytes, all of which can cause cutaneous mycoses: Trichophyton, Epidermophyton, and Microsporum. Tineas on most areas of the body are generally called ringworm, but tineas in specific locations may have distinctive names and symptoms (see Table 22.6 and Figure 22.26). Keep in mind that these names—even though they are Latinized—refer to locations on the body, not causative organisms. Tineas can be caused by different dermatophytes in most areas of the body.

Table 22.6. Some Common Tineas and Location on the Body

Dermatophytes are commonly found in the environment and in soils and are frequently transferred to the skin via contact with other humans and animals. Fungal spores can also spread on hair. Many dermatophytes grow well in moist, dark environments. For example, tinea pedis (athlete’s foot) commonly spreads in public showers, and the causative fungi grow well in the dark, moist confines of sweaty shoes and socks. Likewise, tinea cruris (jock itch) often spreads in communal living environments and thrives in warm, moist undergarments.

Tineas on the body (tinea corporis) often produce lesions that grow radially and heal towards the centre. This causes the formation of a red ring, leading to the misleading name of ringworm recall the Clinical Focus case in Unicellular Eukaryotic Parasites.

Several approaches may be used to diagnose tineas. A Wood’s lamp (also called a black lamp) with a wavelength of 365 nm is often used. When directed on a tinea, the ultraviolet light emitted from the Wood’s lamp causes the fungal elements (spores and hyphae) to fluoresce. Direct microscopic evaluation of specimens from skin scrapings, hair, or nails can also be used to detect fungi. Generally, these specimens are prepared in a wet mount using a potassium hydroxide solution (10%–20% aqueous KOH), which dissolves the keratin in hair, nails, and skin cells to allow for visualization of the hyphae and fungal spores. The specimens may be grown on Sabouraud dextrose CC (chloramphenicol/cyclohexamide), a selective agar that supports dermatophyte growth while inhibiting the growth of bacteria and saprophytic fungi (Figure 22.27). Macroscopic colony morphology is often used to initially identify the genus of the dermatophyte; identification can be further confirmed by visualizing the microscopic morphology using either a slide culture or a sticky tape prep stained with lactophenol cotton blue.

Various antifungal treatments can be effective against tineas. Allylamine ointments that include terbinafine are commonly used; miconazole and clotrimazole are also available for topical treatment, and griseofulvin is used orally.

Primary cutaneous aspergillosis usually occurs at the site of an injury and is most often caused by Aspergillus fumigatus or Aspergillus flavus. It is usually reported in patients who have had an injury while working in an agricultural or outdoor environment. However, opportunistic infections can also occur in health-care settings, often at the site of intravenous catheters, venipuncture wounds, or in association with burns, surgical wounds, or occlusive dressing. After candidiasis, aspergillosis is the second most common hospital-acquired fungal infection and often occurs in immunocompromised patients, who are more vulnerable to opportunistic infections.

Cutaneous aspergillosis is diagnosed using patient history, culturing, histopathology using a skin biopsy. Treatment involves the use of antifungal medications such as voriconazole (preferred for invasive aspergillosis), itraconazole, and amphotericin B if itraconazole is not effective. For immunosuppressed individuals or burn patients, medication may be used and surgical or immunotherapy treatments may be needed.

Candidiasis of the Skin and Nails

Candida albicans and other yeasts in the genus Candida can cause skin infections referred to as cutaneous candidiasis. Candida spp. are sometimes responsible for intertrigo, a general term for a rash that occurs in a skin fold, or other localized rashes on the skin. Candida can also infect the nails, causing them to become yellow and harden (Figure 22.29).

Candidiasis of the skin and nails is diagnosed through clinical observation and through culture, Gram stain, and KOH wet mounts. Susceptibility testing for anti-fungal agents can also be done. Cutaneous candidiasis can be treated with topical or systemic azole antifungal medications. Because candidiasis can become invasive, patients suffering from HIV/AIDS, cancer, or other conditions that compromise the immune system may benefit from preventive treatment. Azoles, such as clotrimazole, econazole, fluconazole, ketoconazole, and miconazole; nystatin; terbinafine; and naftifine may be used for treatment. Long-term treatment with medications such as itraconazole or ketoconazole may be used for chronic infections. Repeat infections often occur, but this risk can be reduced by carefully following treatment recommendations, avoiding excessive moisture, maintaining good health, practicing good hygiene, and having appropriate clothing (including footwear).

Candida also causes infections in other parts of the body besides the skin. These include vaginal yeast infections (see Fungal Infections of the Reproductive System) and oral thrush (see Microbial Diseases of the Mouth and Oral Cavity).

Whereas cutaneous mycoses are superficial, subcutaneous mycoses can spread from the skin to deeper tissues. In temperate regions, the most common subcutaneous mycosis is a condition called sporotrichosis, caused by the fungus Sporothrixschenkii and commonly known as rose gardener’s disease or rose thorn disease (recall Case in Point: Every Rose Has Its Thorn). Sporotrichosis is often contracted after working with soil, plants, or timber, as the fungus can gain entry through a small wound such as a thorn-prick or splinter. Sporotrichosis can generally be avoided by wearing gloves and protective clothing while gardening and promptly cleaning and disinfecting any wounds sustained during outdoor activities.

Sporothrix infections initially present as small ulcers in the skin, but the fungus can spread to the lymphatic system and sometimes beyond. When the infection spreads, nodules appear, become necrotic, and may ulcerate. As more lymph nodes become affected, abscesses and ulceration may develop over a larger area (often on one arm or hand). In severe cases, the infection may spread more widely throughout the body, although this is relatively uncommon.

DISEASE PROFILE: Mycoses of the Skin

Cutaneous mycoses are typically opportunistic, only able to cause infection when the skin barrier is breached through a wound. Tineas are the exception, as the dermatophytes responsible for tineas are able to grow on skin, hair, and nails, especially in moist conditions. Most mycoses of the skin can be avoided through good hygiene and proper wound care. Treatment requires antifungal medications. Table 22.7 summarizes the characteristics of some common fungal infections of the skin. 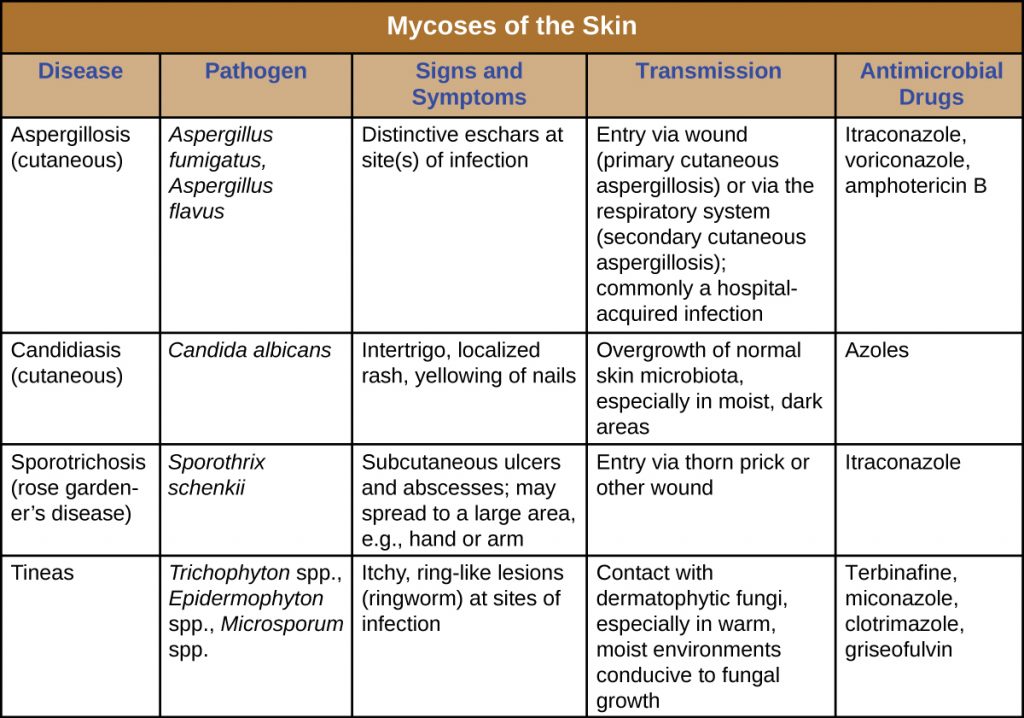