21. Laboratory Analysis of the Immune Response

Rapid visualization of bacteria from a clinical sample such as a throat swab or sputum can be achieved through fluorescent antibody (FA) techniques that attach a fluorescent marker (fluorogen) to the constant region of an antibody, resulting in a reporter molecule that is quick to use, easy to see or measure, and able to bind to target markers with high specificity. We can also label cells, allowing us to precisely quantify particular subsets of cells or even purify these subsets for further research.

As with the enzyme assays, FA methods may be direct, in which a labeled mAb binds an antigen, or indirect, in which secondary polyclonal antibodies bind patient antibodies that react to a prepared antigen. Applications of these two methods were demonstrated in Figures 2.19-2.20. FA methods are also used in automated cell counting and sorting systems to enumerate or segregate labeled subpopulations of cells in a sample.

Direct fluorescent antibody (DFA) tests use a fluorescently labeled mAb to bind and illuminate a target antigen. DFA tests are particularly useful for the rapid diagnosis of bacterial diseases. For example, fluorescence-labeled antibodies against Streptococcus pyogenes (group A strep) can be used to obtain a diagnosis of strep throat from a throat swab. The diagnosis is ready in a matter of minutes, and the patient can be started on antibiotics before even leaving the clinic. DFA techniques may also be used to diagnose pneumonia caused by Mycoplasma pneumoniae or Legionella pneumophila from sputum samples (Figure 21.28). The fluorescent antibodies bind to the bacteria on a microscope slide, allowing ready detection of the bacteria using a fluorescence microscope. Thus, the DFA technique is valuable for visualizing certain bacteria that are difficult to isolate or culture from patient samples.

Watch the animation on this page to review the procedures of the direct fluorescent antibody test.

Indirect fluorescent antibody (IFA) tests (Figure 21.29) are used to look for antibodies in patient serum. For example, an IFA test for the diagnosis of syphilis uses T. pallidum cells isolated from a lab animal (the bacteria cannot be grown on lab media) and a smear prepared on a glass slide. Patient serum is spread over the smear and anti-treponemal antibodies, if present, are allowed to bind. The serum is washed off and a secondary antibody added. The secondary antibody is an antihuman immunoglobulin conjugated to a fluorogen. On examination, the T. pallidum bacteria will only be visible if they have been bound by the antibodies from the patient’s serum.

The IFA test for syphilis provides an important complement to the VDRL test discussed in Detecting Antigen-Antibody Complexes. The VDRL is more likely to generate false-positive reactions than the IFA test; however, the VDRL is a better test for determining whether an infection is currently active.

IFA tests are also useful for the diagnosis of autoimmune diseases. For example, systemic lupus erythematosus (SLE) (see Autoimmune Disorders) is characterized by elevated expression levels of antinuclear antibodies (ANA). These autoantibodies can be expressed against a variety of DNA-binding proteins and even against DNA itself. Because autoimmunity is often difficult to diagnose, especially early in disease progression, testing for ANA can be a valuable clue in making a diagnosis and starting appropriate treatment.

The IFA for ANA begins by fixing cells grown in culture to a glass slide and making them permeable to antibody. The slides are then incubated with serial dilutions of serum from the patient. After incubation, the slide is washed to remove unbound proteins, and the fluorescent antibody (antihuman IgG conjugated to a fluorogen) added. After an incubation and wash, the cells can be examined for fluorescence evident around the nucleus (Figure 21.30). The titre of ANA in the serum is determined by the highest dilution showing fluorescence. Because many healthy people express ANA, the American College of Rheumatology recommends that the titre must be at least 1:40 in the presence of symptoms involving two or more organ systems to be considered indicative of SLE.[1]

Fluorescently labeled antibodies can be used to quantify cells of a specific type in a complex mixture using flow cytometry (Figure 21.31), an automated, cell-counting system that detects fluorescing cells as they pass through a narrow tube one cell at a time. For example, in HIV infections, it is important to know the level of CD4 T cells in the patient’s blood; if the numbers fall below 500 per μL of blood, the patient becomes more likely to acquire opportunistic infections; below 200 per μL, the patient can no longer mount a useful adaptive immune response at all. The analysis begins by incubating a mixed-cell population (e.g., white blood cells from a donor) with a fluorescently labeled mAb specific for a subpopulation of cells (e.g., anti-CD4). Some experiments look at two cell markers simultaneously by adding a different fluorogen to the appropriate mAb. The cells are then introduced to the flow cytometre through a narrow capillary that forces the cells to pass in single file. A laser is used to activate the fluorogen. The fluorescent light radiates out in all directions, so the fluorescence detector can be positioned at an angle from the incident laser light.

Figure 21.31 shows the obscuration bar in front of the forward-scatter detector that prevents laser light from hitting the detector. As a cell passes through the laser bar, the forward-scatter detector detects light scattered around the obscuration bar. The scattered light is transformed into a voltage pulse, and the cytometre counts a cell. The fluorescence from a labeled cell is detected by the side-scatter detectors. The light passes through various dichroic mirrors such that the light emitted from the fluorophore is received by the correct detector.

After notifying all 1300 patients, the hospital begins scheduling HIV screening. Appointments were scheduled a minimum of 3 weeks after the patient’s last hospital visit to minimize the risk of false negatives. Because some false positives were anticipated, the public health physician set up a counselling protocol for any patient whose indirect ELISA came back positive.

Of the 1300 patients, eight tested positive using the ELISA. Five of these tests were invalidated by negative western blot tests, but one western blot came back positive, confirming that the patient had indeed contracted HIV. The two remaining western blots came back indeterminate. These individuals had to submit to a third test, a PCR, to confirm the presence or absence of HIV sequences. Luckily, both patients tested negative.

As for the lone patient confirmed to have HIV, the tests cannot prove or disprove any connection to the syringes compromised by the former hospital employee. Even so, the hospital’s insurance will fully cover the patient’s treatment, which began immediately.

Although we now have drugs that are typically effective at controlling the progression of HIV and AIDS, there is still no cure. If left untreated, or if the drug regimen fails, the patient will experience a gradual decline in the number of CD4 helper T cells, resulting in severe impairment of all adaptive immune functions. Even moderate declines of helper T cell numbers can result in immunodeficiency, leaving the patient susceptible to opportunistic infections. To monitor the status of the patient’s helper T cells, the hospital will use flow cytometry. This sensitive test allows physicians to precisely determine the number of helper T cells so they can adjust treatment if the number falls below 500 cells/µL.

The flow cytometre and immunofluorescence can also be modified to sort cells from a single sample into purified subpopulations of cells for research purposes. This modification of the flow cytometre is called a fluorescence-activated cell sorter (FACS). In a FACS, fluorescence by a cell induces the device to put a charge on a droplet of the transporting fluid containing that cell. The charge is specific to the wavelength of the fluorescent light, which allows for differential sorting by those different charges. The sorting is accomplished by an electrostatic deflector that moves the charged droplet containing the cell into one collecting vessel or another. The process results in highly purified subpopulations of cells.

One limitation of a FACS is that it only works on isolated cells. Thus, the method would work in sorting white blood cells, since they exist as isolated cells. But for cells in a tissue, flow cytometry can only be applied if we can excise the tissue and separate it into single cells (using proteases to cleave cell-cell adhesion molecules) without disrupting cell integrity. This method may be used on tumours, but more often, immunohistochemistry and immunocytochemistry are used to study cells in tissues.

Watch videos to learn more about how flow cytometry and a FACS work.

Table 21.5 compares the mechanisms of the fluorescent antibody techniques discussed in this section. 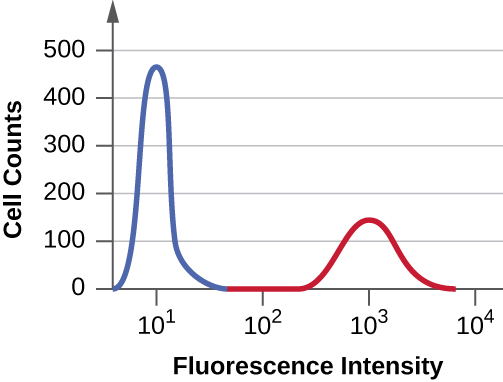