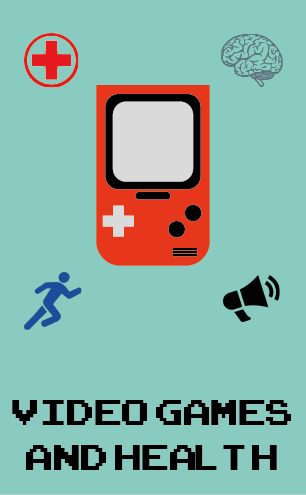 Violence is one negative factor that is linked to playing video games. Violence is either labelled or not labelled on video games and such exposure to violence has been linked to aggressive behaviour, reduction in pro-social behaviours and aggressive cognitions. Additional research into the negative effects of video games includes poor school performance, motion sickness and physical injuries in relation to repetitive strain. (National Center for Biotechnology Information #)

Studies into video games in terms of physical activities have shown that it is well-suited as a form of physiotherapy for many different people. Unlike more traditional therapeutic methods they don’t rely on movements of the limbs.  Video games are used to help with treating arm injuries and as a form of occupational therapy in increasing hand strength. Such benefits have been identified in a variety of different adults including wheelchair users and those with muscular dystrophy. (Griffith 1)

Awareness
Studies into awareness have revealed that those who play video games have significant improvements in selective types of attention. This includes sustained and selective attention. In addition, research has indicated that regions of the brain that are attributed to attention become more efficient than non-gamers. Research has also pointed out that playing video games can affect or change different regions of our brain. New verdicts have revealed that playing video games not only changes our brain’s performance but their structure too. In addition, the regions of the brain that play a significant role in attention are more effective in gamers in contrast with non-gamers, requiring less activation to stay focused on demanding tasks. (Nichols)

Cognitive Activity
Positive effects of video games on the cognitive aspect of people were first observed in 1987; where people playing commercial games such as Pacman and Donkey kong have conceived positive increases to their cognitive skills. (Clark et al., 1987). Since then, numerous studies have looked into the relations between video games and cognitive activity within people. Each study has revealed consistent findings of young people who play video games have higher IQs and perform strongly on a variety of cognitive tests of perceptual and mental ability than non-gamers. (Pallavicini et al. 1)

In addition, those who play video games that require fast reaction times such as Call of Duty have shown to improve overall dexterity and response. Studies performed with dozens of non-video game players between 18- to 25-year-olds (in which one group played a fast-paced action game and the other a slow-paced game) have shown that those who fast-paced games are 25% faster with their actions than those who play slow-paced games.

Looking through the research and statistics done by researchers, there is a whole lot of evidence that video games can be of great benefit in relation to one’s health. Games are well-suited for physical activities such as physiotherapy and treating limb injuries, can improve one’s own awareness, increasing brain activity, and improving one’s state of mind. Overall, It was a good learning experience; researching and learning what video games can benefit us and I enjoyed it.

Pallavicini, Frederica, et al. “Video Games for Well-Being: A Systematic Review on the Application of Computer Games for Cognitive and Emotional Training in the Adult Population.” 2018, p. 1.
frontiers in psychology , https://www.frontiersin.org/articles/10.3389/fpsyg.2018.02127/full. Accessed 21 February 2021.

Ron Mencias is a second-year student studying Creative Media in TUD Blanchardstown. He is interested in the pursuit of a career in web design, video editing, and game design. He is committed to pursuing a career in one of the three modules, as well as successfully completing his own goals in the future. His hobbies consist of reading, writing, gaming, video editing, walking, cycling, and piano. His favourite pastime is reading stories online and spending time with friends.

Game Design & Development 2021 by Ron Mencias is licensed under a Creative Commons Attribution-NonCommercial-ShareAlike 4.0 International License, except where otherwise noted.