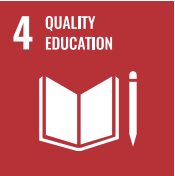 In this 10-minute video made available from the SDG Academy, Jeffery Sachs looks at the six key transformation pathways to the SDGs, followed by a more in-depth analysis of education, inclusion, jobs, and growth. Professor Sachs’ analysis includes discussion of early childhood development, gender fairness, the school-to-work transition, the maintenance of labor standards throughout the economy, and making the economy more innovative.

Education enables upward socioeconomic mobility and is a key to escaping poverty[1].

Over the past decade, major progress was made towards increasing access to education and school enrolment rates at all levels, particularly for girls. Nevertheless, about 260 million children were still out of school in 2018, which is 20% of the global population in that age group[2]. More than half of all children and adolescents worldwide are not meeting minimum proficiency standards in reading and mathematics2.

Canada’s population are among the most educated people in the world, with 54% of adults aged 25 to 64 having completed post-secondary education in 2016, compared to the Organization for Economic Cooperation and Development (OECD) countries with an average of 36.7%1. Although the percentage of the Canadian population with post-secondary degrees have steadily increased since 1990, with women consistently attaining higher rates of post-secondary education than men, problems still exist1. Canada still experiences a high degree of academic and therefore occupational gender segregation, with men comprising two thirds of post-secondary graduates in science, technology, engineering, and mathematics (STEM), with an even greater disparity in engineering and computer science programs and skilled trades1. Less than 14% of engineers in Canada are women[3].

Worldwide, including Canada, education systems do not respect Indigenous Peoples’ diverse cultures[4]. There are too few teachers who speak their languages, and their schools often lack basic materials. Educational materials that provide accurate and fair information on indigenous peoples and their ways of life are particularly rare4. Despite the numerous international instruments that proclaim universal rights to education, Indigenous Peoples do not fully enjoy these rights, and an education gap between indigenous peoples and the rest of the population remains critical, worldwide4.

In 2020, as the COVID-19 pandemic spread across the globe, a majority of countries announced the temporary closure of schools, impacting more than 9% of students worldwide. By April 2020, close to 1.6 billion children and youth were out of school2. And nearly 369 million children who rely on school meals needed to look to other sources for daily nutrition2. Never before have so many children been out of school at the same time, disrupting learning and upending lives, especially the most vulnerable and marginalized2. The global pandemic has far-reaching consequences that may jeopardize hard won gains made in improving global education.

Why should I care about ensuring a quality education for all? Education enables upward socioeconomic mobility and is a key to escaping poverty. Education helps reduce inequalities and reach gender equality and is crucial to fostering tolerance and more peaceful societies worldwide.

Below is Canada’s approach to measuring progress on SDG #4 – Quality Education. Note the targets and indicators chosen[5]. 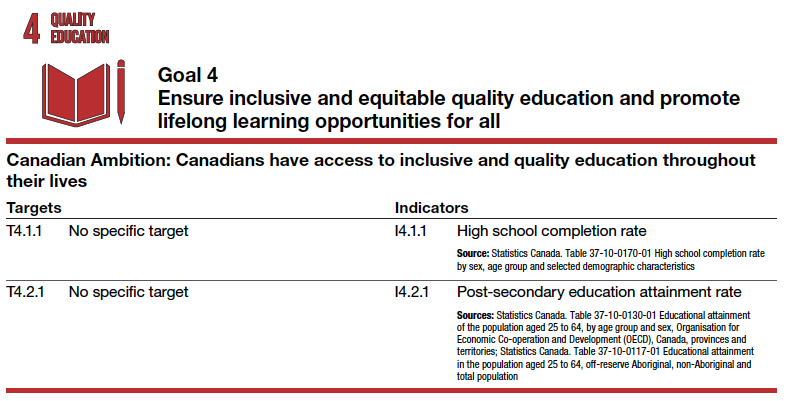