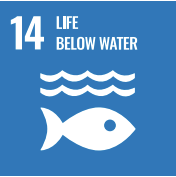 In this 21-minute video made available from the SDG Academy, Jeffrey Sachs looks at human interactions with oceans and aquaculture, and the adverse effect it has had on marine ecosystems and well as fisheries.

Healthy and resilient oceans help to mitigate the effects of climate change, provide food security to millions of people around the world and drive economic activity through marine trade and transport[1]. The ocean drives global systems that make the Earth habitable for humankind. Our rainwater, drinking water, weather, climate, coastlines, much of our food, and even the oxygen in the air we breathe, are all ultimately provided and regulated by the ocean[2].

Rising sea levels, ocean acidification and thinning sea ice are affecting vulnerable regions, and coastal communities. Careful management of this essential global resource is a key feature of a sustainable future. However, at the current time, there is a continuous deterioration of coastal waters owing to pollution, and ocean acidification is having an adversarial effect on the functioning of ecosystems and biodiversity2. This is also negatively impacting small scale fisheries.

Canada has the world’s longest coastline, it borders the Pacific, Atlantic and Arctic oceans, and forms the one of the largest ocean bodies of any country in the world1. Coastal waters are deteriorating globally due to pollution and eutrophication. Roughly 80% of marine and coastal pollution originates from land, including agricultural run-off, pesticides, plastics, and untreated sewage2. In 2021, approximately 14% of Canada’s ocean was protected with government commitments to protecting 25% by 2025 and 30% by 2030[3].

Saving our ocean must remain a priority. Marine biodiversity is critical to the health of people and our planet2. Marine protected areas need to be effectively managed and well-resourced, and regulations need to be put in place to reduce overfishing, marine pollution, and ocean acidification.

Why should I care about the conservation and sustainable use of oceans, seas, and marine resources?

Oceans are the planet’s life support system. Phytoplankton, the tiny plant-like organisms (actually marine algae) that live in oceans are responsible for at least 50% of the oxygen on Earth. They are also the base of marine food webs. If phytoplankton were to dimmish, the livelihood of all marine life and the 3+ billion people who rely on oceans for survival would be in great jeopardy.

Below is Canada’s approach to measuring progress on SDG #14 – Life Below Water. Note the targets and indicators chosen[4]. 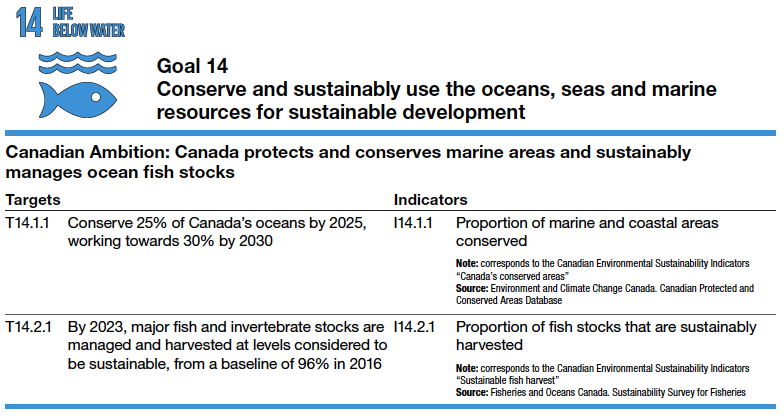