In this 11-minute video made available from the SDG Academy, Jeffrey Sachs provides an overview of the importance of cities, the challenges they bring, and the work required to achieve sustainable development for urban areas.

Cities are vital contributors to prosperity and people’s standard of living[1]. The world is becoming increasingly urbanized. Since 2007, more than half the world’s population has been living in cities, which is projected to rise to 60% by 2030 (2). Cities and metropolitan areas are powerhouses of economic growth, contributing about 60% of global GDP. They are places where dynamic economic, cultural, and social exchanges converge to support economic performance and social progress1. However, they also account for about 70% of global carbon emissions and over 60% of resource use.

Cities are key engines for the growing knowledge economy. Rapid urbanization is resulting in a growing number of slums globally, with inadequate and overburdened infrastructure and services (such as waste collection and water and sanitation systems, roads, and transport), worsening air pollution and unplanned urban sprawl[2]. Decision makers need to plan for economic growth in this competitive environment, while at the same time ensuring their communities are safe and livable, provide opportunities and a positive quality of life for diverse, growing populations. They will need to manage a built environment that is under continual pressure to grow and improve while addressing the pressing issues of climate change and environmental sustainability.

In Canada, more than 82% of the population live in cities and their surrounding metropolitan areas. Canadian cities are competing globally for people, technological leadership and capital investment, however, Canadians are among the highest per capita carbon emitters countries in the world[3].

The impact of COVID-19 will be most devastating in poor and densely populated urban areas, especially for the one billion people living in informal settlements and slums worldwide, where overcrowding also makes it difficult to follow recommended measures such as social distancing and self-isolation2. The UN food agency warned that hunger and fatalities could rise significantly in urban areas, without measures to ensure that poor and vulnerable residents have access to food2.

Why should I care about Sustainable cities and communities?

Over 4 billion people, half of the global population, living in the world’s cities face worsening air pollution, and inadequate infrastructure and services. This situation is true for developed and developing countries, with these issues affecting all global citizens. Pollution deteriorates everyone’s health and affects economic productivity and therefore all economies.

Below is Canada’s approach to measuring progress on SDG #11 – Sustainable Cities and Communities. Note the targets and indicators chosen[4]. 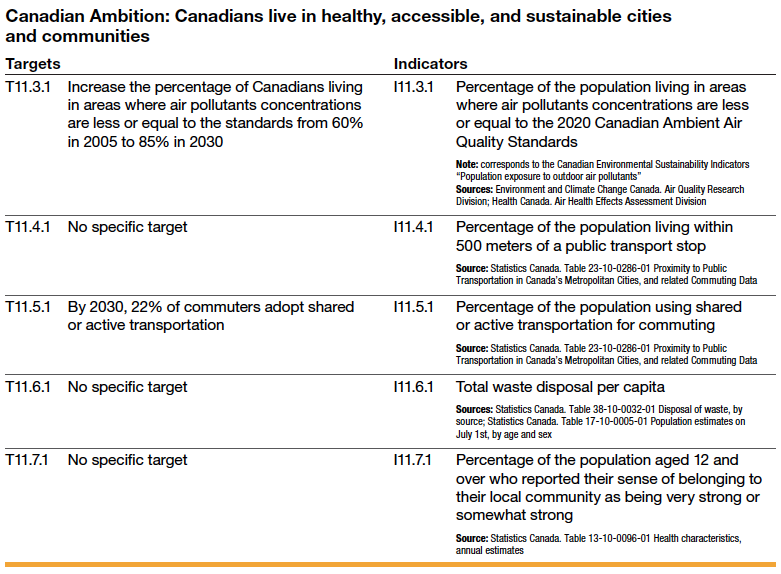