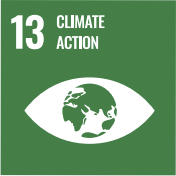 In this 17-minute video made available from the SDG Academy, Jeffery Sachs focuses on the consequences of climate change, and the dangers of not significantly reducing human CO2 emissions.

Earlier in the course we learned the concept of sustainable development was adopted as a shared global concept at the UN 1992 Conference on Environment and Development, commonly known as the Rio Earth Summit. During this conference, three major multilateral environmental agreements were also adopted; the UN Framework Convention on Climate Change, the UN Convention on Biological Diversity, and the UN Convention on Desertification to stop the spread of deserts in the dryland regions of the world.

Twenty years later in 2012, the UN Member States meet again in Rio at the now referred to Rio +20 conference. This 20th anniversary of the Earth Summit brought the realization that the concept of sustainable development had not progressed, and the three environmental agreements on climate, biodiversity, and combating deserts were not being implemented.

The outcomes of the Rio+20 conference saw the mobilization of sustainable development through Agenda 2030, and was the catalyst for the December 12, 2015, signing of the Paris Climate Agreement. The Paris Agreement is centred on SDG #13 and provides a mechanism to implement the UN Framework Convention on Climate Change in a serious way. The Agreement is bound together with the 17 Sustainable Development Goals to stop global warming and human induced climate change.

Climate change is one of the most pressing challenges facing humanity today. The science is conclusive, swift action is needed to reduce greenhouse gases, enhance climate resilience, and protect our natural environment[1]. Carbon dioxide (CO2) levels and other greenhouse gases in the atmosphere rose to new records in 2019, with 2010 – 2019 on record as the warmest decade ever recorded[2]. Climate change is affecting every country on every continent. It is disrupting national economies and affecting lives. Weather patterns are changing, sea levels are rising, and weather events are becoming more extreme2.

Urgent action is needed to address the climate emergency. The Paris Agreement aims to strengthen the global response to the threat of climate change by keeping a global temperature rise this century well below 2 degrees Celsius above pre-industrial levels. The agreement also aims to strengthen the ability of countries to deal with the impacts of climate change through appropriate financial flows, technology, and enhanced capacity building including with the  Intergovernmental Panel on Climate Change (IPCC). The IPCC is the leading body for the assessment of climate change, established by the World Meteorological Organization (WMO) and the United Nations Environment Programme (UNEP) in 1988, with a mandate to provide internationally coordinated scientific assessments of the magnitude, timing, and potential environmental and socio-economic impact of climate change and realistic response strategies.

From the Intergovernmental Panel on Climate Change we know:

Why should I care about taking urgent action to combat climate change and its impacts?

The 2010-2019 decade was the warmest ever recorded, bringing with it massive wildfires, hurricanes, droughts, floods, and other climate disasters across all continents. Climate change is affecting every country in the world. It is disrupting national economies and affecting lives and livelihoods, especially for the most vulnerable. Climate change puts the whole world under pressure, everywhere, at the same time.

Below is Canada’s approach to measuring progress on SDG #13 – Climate Action. Note the targets and indicators chosen[4]. 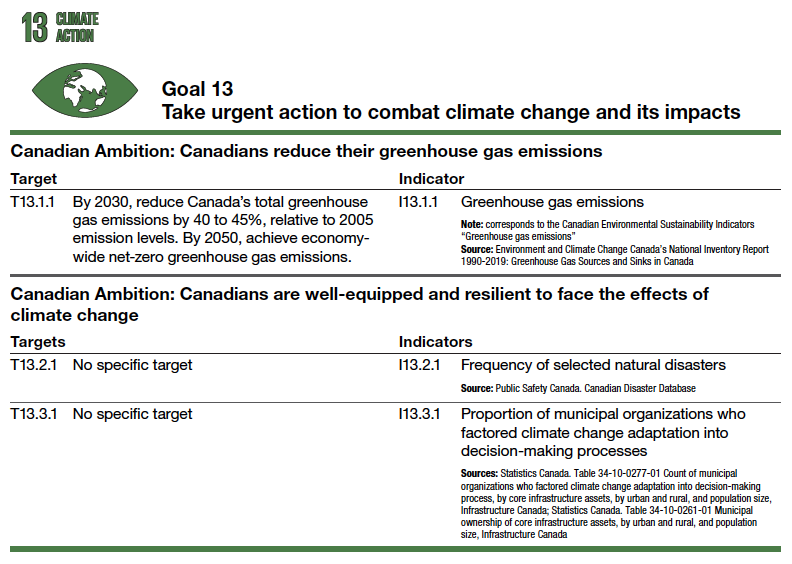