What went wrong with Theranos?

In 2004 a second-year Chemical Engineering student at Stanford University decided that continuing her education would no longer be useful for her. She believed that the extra two years would only hold her back from her entrepreneurial dream as it held back her idol Steve Jobs(1). This student, Elizabeth Holmes even had a step up on her idol as she came from a wealthy family, her father was a former Vice President at Enron and her mother was a Congressional Committee staffer(1). Still, Holmes worked hard throughout high school and college, she learned Mandarin in high school and worked at a graduate level lab in her first year at Stanford. Holmes was destined for an incredible future which started with her first company Theranos in 2004. Theranos would eventually become an immense biotechnology company in Silicon Valley and famous for potentially changing the medical world. However, there is a reason that did not happen, and this starts with Holmes herself. 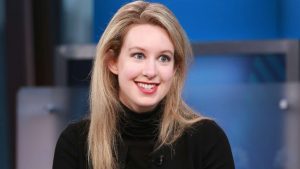 Theranos began based on a simple idea, Holmes wanted to create equipment that would eliminate needles from drawing blood and be replaced by a blood prick. This technology would be able to analyze over 100 tests all within minutes at a local Walmart or Walgreens(2). This would decrease wait times for patients for vital information and revolutionize health care all over the world. Through the years Theranos would slowly progress into a billion-dollar company and make Holmes a hero in the medical community and celebrity everywhere else. By 2014 Theranos would be evaluated at $9 billion dollars and have an all-star cast of a board of directors containing 2 former secretary of states and 2 united states senators which gave Theranos even more fame and credibility(1). Even though everything on the outside looked amazing for Theranos, on the inside there was a lot of trouble and ineptitude within the organization. What everyone thought was amazing an amazing company was actually terrible business practices built on lies that would eventually catch up to Theranos.

There were many problems with the management of Theranos which started out at the beginning. The majority of the start-up biotechnology companies will have leadership that have Ph.D.’s as seen with Amgen and George Rathmann in the 1980s or Walter Gilbert of Biogen(3)(4). Theranos, even though its product was a medical technology company had its founder drop out after her second year in chemical engineering. Holmes was still considered a very intelligent person, but it could be a bit ignorant to change the medical technology landscape but not have the same amount of knowledge as someone that may have spent years attaining their Ph.D.’s or Master of Engineering. She also did not have any medical technology Ph.D.’s that she trusted in her management that could give her intelligent advice(1). She was a very bright student that had many ideas, however, a professor she worked with had rejected some of her ideas for not being technologically possible(1), which was an unfortunate foreshadowing of Theranos technology.

It didn’t take long for problems to occur after Theranos was incorporated in 2004. In 2006 Henry Mosley, the chief financial officer of Theranos noticed that employees were unhappy after a demonstration of their technology, Edison which analyzed blood samples, to the pharmaceutical company Novartis. When Mosley questioned his staff, he found out that they were unhappy because they had to pre-record the demonstration and lie to Novartis because Theranos’s technology was often faulty and wouldn’t work. Mosley was distraught as he also realized he had never seen any evidence of their technology working and that he had inflated future revenues due to his confidence in Holmes’s idea(5). When he confronted Holmes about the problem, she fired him for not being a “team player.” The big problem with this was that the technology would never work as it was nearly impossible. One of the big problems that never was solved for Theranos was the equipment needed a specific volume, and since Holmes was set on using a blood prick they would have to dilute the blood, which would skew the data on analysis(6). Another problem with the amount of blood drawn itself was the composition of the blood taken from a finger prick would not have a common concentration like what would be found if taken from a vein. This would lead to varying concertation of molecules like lipids and proteins after each sample is taken, which would distort the data. Since blood taken from a finger prick is also considered bodily fluid it would mean that it would also need FDA approval for each test that Theranos said it needed(6). Theranos never got the FDA approval for these tests, only one test for detection of the Herpes infection. There were many problems with the lab practices itself as the FDA had warned Theranos with problems like a record of acceptable suppliers or that the device did not meet any expectations that it was stated in 2015(6). The majority of Theranos employee were not aware of the impossibility of Holmes idea and those that did were inspired by Holmes that their hard work would eventually pay off. However, it never would.

The Question of Morality

One of the worst things Holmes did at Theranos was using Theranos Edison, which produced inaccurate results in real life trials. This occurred when a major drug company made a deal with Theranos in 2008 to test its technology for a study on stage 3 and 4 cancer patients(7). Holmes told her employees that the results wouldn’t impact the patients but there a few who knew that it was a lie. Ana Arriola, a product designer from Apple who was one of Theranos first recruits and Adam Vollmer a mechanical engineer confronted Holmes about this issue. They were concerned about the false results that would be given to the oncology patients in this trial and wanted to cancel the plan. All Holmes said to them was to follow suit with the company or resign, they both resigned in 2008. It got even worse in 2015 when the technology was estimated to be have been used on over 176,000 people (8). Their testing would misdiagnose patients by diagnosing them with an illness they did not actually have or not actually diagnose them at all. This would prompt the patients to completely change their lifestyles or would possibly not even be aware that they needed a lifestyle change in the first place.

There were also problems with the management at Theranos as seen with the firing of Mosley, but also with the hiring of Sunny Balwani (9). Balwani met Holmes before she went to Stanford when he was 37 and she was 18 in 2002. By 2005 Balwani and Holmes were living together and by 2009 Balwani joined Theranos as the chief operating officer. One of the major problems with this was that Balwani did not have any training in medical or biological science. Balwani was in also in a relationship with Holmes but it was not disclosed to investors or employees (10). His inexperience in biological science showed itself to the top researchers at the company as he was seen to be clueless in meetings especially as a top executive (10). Balwani also had a huge problem with a lot of the employees by yelling orders and continuing to humiliate if they did not follow his commands (9). Balwani also fired people so often that it became a common phrase in the company that “Sunny disappeared him.” This created a toxic work environment for Theranos with an underqualified boss barking orders and high temper firings of competent people which caused a high turnover rate.

Another big problem found in Theranos was with the board of directors. It was a star-studded cast filled with many important and recognizable names that brought a lot of attention to Theranos like George Schultz and Henry Kissinger, two former secretaries of states(1). However, the majority of the board in 2014 may have had experience in politics or military but very few had any knowledge of medical technology. This would have allowed Holmes to persuade and convince the board to what she wanted as they did not have the knowledge in that field to question Holmes. Also if there were problems with the technology the board would not understand the severity and Holmes would pass the problem off as not a big deal. She was able to do this as she was always described having a charismatic personality that first attracted the elite board members(1). There are also rumors that her booming deep voice is faked on purpose to garner more respect from her peers(10). With such an amazing company and reputation it dazzled many investors that were lining up to be to give Holmes money. The company even has an amazing story of an incredibly smart female CEO who wants to help save the world. This leads to a fear of missing out or FOMO to investors in silicon valley according to a one of Theranos former board of directors Avie Tevanian(7).

There was also a lot of problems with the lower level employees as many had described the company management as a “South American dictatorship or a drug cartel.”(10) Holmes would constantly micromanage the employees that created distrust between the staff and herself. Holmes also isolated the majority of her employees to limit the communication about their tasks, which she defended by stating it was to keep trade secrets. However, it was more likely to ensure that other employees don’t piece together the failure of their technology. This along with Sunny Belwani also berating the employees when he himself had very little knowledge of anything Theranos was doing led to a toxic work environment. This in case gave Theranos a high-turnover rate as many employees saw their intelligent partners quit or be fired if left a lot of the employees insecure.

In the end, Elizabeth Holmes biggest mistake was her desire to be like Steve Jobs which was something she could never accomplish. Jobs knew when he was in over his head and hired CEO’s with previous experience, Holmes hired Sunny Balwani who had none(11). Jobs also had Steve Wozniak who was a gifted computer engineer that Jobs had highly respected, Holmes did not have anyone with such expertise that she trusted at Theranos(11). Finally, Jobs had visions for things that were challenging but not impossible. There was already a prototype for the Mac II made by Wozniak. To miniaturize the iPod Jobs had a supplier and manufactures at hand. While what Holmes was doing was decreasing the size of current technology over a hundredfold which would be made from technology that had not been even invented yet(11). Holmes was in over her head at Theranos which led to bad decisions that would eventually lead to the downfall of Theranos. 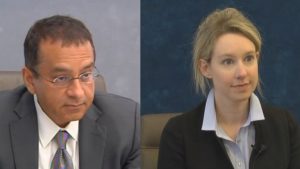 Balwani (left) and Holmes (right) during their 2017 deposition with the Securities and Exchange Commission. (7)

Theranos’s crimes were discovered by Wall Street Journal writer John Carreyou who was able to expose Holmes fraud(12). Holmes and Balwani were eventually charged and removed as CEO and COO and are currently awaiting trials for the future(13). What the world can learn from Holmes is that faking it until you make it for such a long time. Eventually, all the lies and deception will catch up.

(2) Paradis, Norman A. “The Rise and Fall of Theranos.” Scientific American. April 22, 2016. https://www.scientificamerican.com/article/the-rise-and-fall-of-theranos/

(6) Paradis, Norman A. “The Rise and Fall of Theranos.” Scientific American. April 22, 2016. https://www.scientificamerican.com/article/the-rise-and-fall-of-theranos/