There is a significant problem with food waste around the globe. It is estimated almost 50% of all food produced is wasted1. While many countries have adopted strategies to combat this crisis Canada is seriously lagging behind1. This is not only wasteful but has major consequences for both the environment and economy1. When you consider Canada’s vast geography, and the distance food must travel, there is a significant cost to business and a large amount of greenhouse gas released just for the distribution of food that is ultimately wasted. In addition, the food that is wasted is sent to landfills or compost where additional fossil fuels are burned for its transport. At landfills, methane gas is released upon anaerobic degradation of the waste. Organic waste in landfills results in about 4% of our annual greenhouse gas release1. Compost represents an improvement; however, it takes up large amounts of space and requires a long time for complete degradation. In addition, compost requires uncontaminated organic waste which is hard to supply with current waste separating behaviours1. When all cumulative costs are considered (energy, labor, etc..), food waste is estimated to cost the Canadian economy up to $100 Billion each year2.

Several companies have responded to the food waste crisis by developing food waste digesters to break down food waste into water that meets municipal discharge standards. ORCA is an international company that uses a proprietary set of microbes to digest food waste into water. However, the resulting water must be discharged down sewers and is treated by municipal wastewater systems3. While their technology is incredibly scalable with a small option for restaurants, and 3 larger model sizes3, there are fees that must be paid due to the compounds left in the discharged water4. This ultimately offsets some of the cost savings from avoiding landfills. A solution to this trade-off has been developed by a company called Micron Waste Technologies. Micron is an innovator in this field who developed a waste digester that offers a real competitive advantage.

An Introduction to Micron Waste Technologies

“It has always been Micron’s intention to create a system that was not only best-in-class but one that re-invented that class entirely,” 5 – Alfred Wong (President, Micron Waste Technologies)

Micron Waste Technologies Inc. is a Vancouver, Canada based biotech company with $6 million in capital5. Since their start in 2006, they have been looking to revolutionize the waste treatment industry. In February of 2017, results were announced from a pilot operation of Micron’s waste digesting system in Richmond, BC. Exova, a third party which analyzed the results, indicated the water output from the system far exceeded municipal wastewater discharge standards6. Micron’s patented on-site waste digesting system far exceeds the performance capabilities of competing products such as ORCA. Through a three-step process, the Micron system will digest waste until the resulting water is 99.94% clean (Exhibit 1)7. Competing products, such as the Orca, can only achieve 60-65% digestion efficiency which results in water that is far dirtier. The superior performance of the Micron product is due to initial digestion using proprietary enzymes to render water 95% clean and then a final water treatment to produce 99.94% clean water7. Superior water cleanliness is the main advantage of the Micron system. While the resulting water is not potable, it can still be recycled for other uses such as in agriculture or released into municipal sewers without having to pay the fees associated with dirty water discharge7. These innovations in waste management demonstrate Micron’s ability to create best-in-class technology. The innovative transformation process is demonstrated in Exhibit 1.

After the success of their pilot program in Richmond, BC the company hardened its commitment to advancing waste management practices in Canada by joining the National Zero Waste Council of Canada8. This council is led by businesses who are aligned with the common goal of improving waste management strategies across the country8. In October 2017, Micron began trading common shares on the Canadian Stock Exchange (CSE) at a price of $0.30 under the ticker symbol “MWM”9. Then in November, Micron entered into a Memorandum of Understanding with T&T supermarkets to explore opportunities to incorporate their waste digesters within the company10. T&T, part of Loblaw Companies Ltd., is the largest Asian grocery chain in Canada, with stores across the country10. At the same time, the company announced the lease of a manufacturing, warehousing and distribution facility in Delta, BC10. This highlighted the end of 2017 and a very busy year for Micron Waste Technologies in bringing their system from R&D to commercial use. The company’s attitude in 2017 is best represented in a quote from the CEO of Micron during this time:

“This is an extremely exciting moment in our development”…”We intend to expand into other sectors looking to improve the operational and cost efficiencies of their organic matter disposal, such as cannabis and quick-serve food markets”10 – Rav Mlait (Former CEO, Micron Waste Technologies)

This quote foreshadowed what would become the primary focus of Micron in 2018 and beyond.

Venturing into the Cannabis Industry

Cannabis was set to be legalized in Canada on October 17, 2018. During this time, companies such as Aurora Cannabis, who previously supplied the medical marijuana market, were scrambling to increase production in order to supply the anticipated increase in demand offered by the recreational cannabis market. An increase in cannabis production results in an increase in cannabis waste. Cannabis waste consists of the organic waste generated from cannabis cultivation and production. This waste contains active pharmaceutical ingredients (APIs) such as THC and CDB11 which must be degraded due to their detrimental environmental effects23.

On January 15, 2018, Micron announced the completion of a strategic investment by Aurora cannabis to develop the world’s first cannabis waste management system. The companies agreed to optimize Micron’s technology for treating cannabis waste and a trial began at the “Aurora Mountain” facility near Calgary12. This moment represented a significant opportunity for Micron since upon a successful trial Aurora could agree to purchase additional units for its other facilities. At the time, Aurora Cannabis Enterprises Inc. was operating three facilities with a combined size of 892,000 square feet, with a fourth facility in production in Quebec12. It was later reported in September 2018 that the trial at the Mountain facility was a success13. The optimized cannabis waste digester named the “Cannavore” was able to treat organic waste and denature APIs using a proprietary process to render wastewater 99.4% clean and recycled for use in cannabis irrigation systems. This demonstrates Micron’s ability to treat specialized waste and create cost-savings for its clients. Aurora followed through on their agreement with Micron and committed to purchasing units for its other sites13. The Cannavore represented a significant cost-saver for Aurora since it no longer had to deal with off-site treatment13, this is critical in an industry that is growing and very competitive. Incorporation of the Cannavore into Aurora’s production process should effectively lower the per-gram cost of producing cannabis. In addition, the Cannavore is a mobile unit that operates from inside a 40ft. shipping container which enables it to be deployed in a variety of environments on land or at sea21.

“We are very pleased with the outcome of the trial and are now moving into commercialization and will begin selling units to the wider cannabis industry” 13           – Alfred Wong (CEO, Micron Waste Technologies).

The timing of the announcement of the successful trial was impeccable since legalization was set to occur in the next month. Micron had also been awarded an Industrial Design Certificate for from the Canadian Intellectual Property Office (CIPO) for its Food and Cannabis Waste Digester which demonstrates the digester is a one-of-a-kind product14. The design patent is valid for up to ten years and covers the unique design features of the unit14.

So far, the company’s success in 2018 has brought them a lot of attention and a lot of recognition. The successful partnership with a large company like Aurora comes with considerable brand recognition for Micron. With this in mind, Micron was seeking to expand the market for its “Cannavore” units.

Recognizing the opportunity south of the border, Micron filed for a US Patent. US Patent 10,144,044 was secured in January of 2019 and protects the bioprocess and compositions of Micron’s food and cannabis waste digester technology18. With an adjusted expiration date in 2036, the company will have a lot of time to spread into the U.S. market while continuing to grow their Canadian client base19. In pursuit of their goals to enter the U.S. cannabis market, Micron partnered with Quest Resource Management Group LLC, a waste management group currently operating in every state20. Quest’s services encompass a variety of industries including the cannabis industry and using its extensive market reach it will be able to accelerate Micron’s entry into the U.S. market. Micron is currently working with BC Research Inc. to manufacture more Cannavore units21. BC Research Inc. supports companies through technology scale-up and commercialization22. In the cannabis market, Micron estimates they can achieve a 20-30% profit margin by selling or renting their Cannavore units23. In addition, the company is researching the nutrient contents of residual solid waste from Cannavore operations for potential use as a fertilizer, therefore creating another value-added product23.

Where Will They Go Now?

Micron’s success with Aurora attracted interest from many other industries looking for waste management solutions, including municipalities, breweries and the agriculture industry23. On January 16, 2019, the company announced Alfred Wong would be taking over the role of President and CEO of Micron, a role previously held by Rav Mlait21. Alfred Wong is planning to focus on commercialization and expanding into new industries.

“I am honored to lead the Company forward as we transition to full-scale production and revenue generation.” 21– Alfred Wong (CEO, Micron Waste Technologies)

Micron has accomplished a lot since the completion of the pilot project in 2017. However, it will not be easy to meet the production goals of all of their new partnerships while simultaneously exploring new markets. Will President and CEO Alfred Wong be able to maintain the growth of Micron and successfully lead the company through a production scale-up of its Cannavore units? Will Micron Waste Technologies be able to incorporate their waste digester successfully into other industries? Only time will tell. 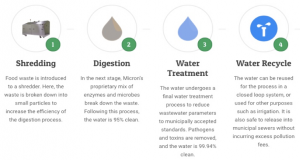 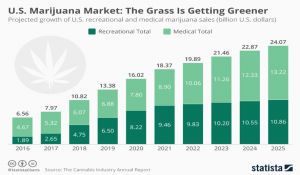