It was the spring of 2016, Doug Ingram, CEO of Sarepta Therapeutics, sat on his chair, waiting for the final decision to be made. He knows this is one of the most important moment of his life, and this could be the life and death situation for his company.

Eteplirsen, a drug for Duchenne Muscular Dystrophy (DMD), developed by Sarepta Therapeutics, has been under the spotlight for the past two years. Sarepta first announced the development of eteplirsen back in 2011. As the only drug on the market for treatment of DMD, this has raised the hope of many DMD patients and their family. After 5 years of clinical trials and review processes, eteplirsen finally got approved in 2016. Seemingly an exciting news, but is it really this simple?

On August 25, 2015, Sarepta Therapeutics announced that they have submitted the New Drug Application (NDA) for eteplirsen to the U.S. Food and Drug Administrationm(FDA). FDA completed eteplirsen’s filing review and determined that it is permit for a substantive review. FDA also granted eteplirsen Priority Review status, which is offered to drug that is more beneficial than existing therapies.

On February 8, 2016, FDA announced that they would require additional time for the review of NDA for eteplirsen. The FDA pointed out that the major amendment to the NDA has been the 4-year clinical data submitted in January 8, 2016 by Sarepta, which included the six-minute walk test (6MWT) and loss of ambulation data compared to historical control.

After almost 3 months of reviewing process, on April 25, 2016, FDA conducted the final meeting and the advisory committee voted 6-7 against the approval of eteplirsen, since they did not find sufficient evidence from clinical studies to show that eteplirsen could induce production of dystrophin to a level that is likely to produce clinical benefit. FDA also said that the advisory committee voted against finding substantial evidence from single historically controlled clinical studies which could indicate eteplirsen is effective treatment of DMD. In one additional question, the panel voted 5 to 7 against whether decisions to use the 6-minute walk test were an sufficiently objective measurement to allow for a valid comparison between patients and controls.

On June 6th, 2016, FDA requested Sarepta to provide additional dystrophin data, as measured by western blot that were generated from biopsies, as part of the evaluation of eteplirsen NDA. On June 27th, 2016, Sarepta submitted measured dystrophin data from 13 biopsy samples at both baseline and Week 48 to FDA for further evaluation.

Duchenne muscular dystrophy (DMD) is an X-linked neuromuscular degenerative disorder that causes severe muscle loss and premature death. The muscle weakness usually starts in the lower limb, and progressively spreading to the arms, neck and upper limb areas. Eventually, breathing failure caused by respiratory muscle dysfunction and cardiac dysfunction can lead to death before the age of 30. At present, DMD is estimated to affect approximately 5000 males worldwide. DMD is caused by a genetic mutation in the dystrophin gene, which code for dystrophin protein. Dystrophin is responsible for proper muscle integrity and function. At present, treatments for DMD are mostly palliative, aiming to improve the patients’ quality of life and delay disease progression. There is no curative therapy available.

Approximately 70% of the mutation are deletions of exons that leads to disruptions of the mRNA reading frame, causing premature termination codons and thus the production of non-functional dystrophin protein. As a result of the lack of dystrophin, muscle weakness usually starts before the age of 6, followed by loss of ambulation by the age of 15.

Becker Muscular Dystrophy (BMD) is a less severe form of muscle dystrophy, which is also caused by mutations in the DMD gene and possess similar symptoms as DMD. However, BMD usually is later onset and progress relatively slowly. This difference is attributed to different types of mutation on the DMD gene: the mutation in BMD does not disrupt the reading frame and thus BMD patients are able to produce partially functional dystrophin protein. Since severity of the disease is driven by the nature of mutation, ideas for potential treatment arises as that induction of exon skipping could potentially correct the reading frame, resulting in production of partially functioning BMD-type dystrophin protein.

Human DNAs are divided into introns and exons, with exons being the coding region of actually genetic materials and introns being genetic noise. Through alternative splicing, particular exons may be included or excluded into the final mRNA produced from that gene, and the introns will be discarded.  As a result, the proteins translated from the mRNA will be different based on which exons are included. A genetic mutation could cause deletion of certain exons and thus alter the splicing process, interfere with the rest of gene being assembled.

Using small piece of synthesized DNA called oligonucleotides, it is possible to encourage the cellular machinery to skip an exon.

Eteplirsen is designed to address the underlying cause of DMD by allowing the production of partially functional dystrophin protein. Using oligonucleotide therapy, Eteplirsen enables the skipping of exon 51 and restoration of genetic mutation, which is shown to affect over 13% of the DMD patient population. This is by far the largest patient population in which single exon skipping is applicable. By skipping exon 51, a truncated but partially functional dystrophin protein can be produced, which significantly slow down disease progression and improve patients’ quality of life. Eteplirsen is marked at about $300,000 per patient per year.

First phase I/II clinical trial was done in 2009. Eteplirsen was administered to 19 DMD patients intravenously, over a dose range of 0.5-20mg/kg/week for 12 weeks. Eteplirsen treatment was found to improve dystrophin expres­sion in 7 of the 19 patients: six given 10–20 mg/kg/week and one given 2 mg/kg/week. Of the seven patients, three responded particularly well, showing an over 10% in dystrophin expression measured by Western Blot. However, the remaining four patients did not give appreciable results, and results from different assays did not agree with one another. Sarepta ascribed the result variability to genetic background differences and suggesting performing an extended clinical trial, as they believed the clinical benefit would only be visible upon prolonged treatment.

Second clinical trial was conducted in 2011 as an extended clinical trial that responded to the shortfall of the last trial. A total of 12 DMD patients were recruited, with 4 patients in each cohort: patients with 30mg/kg/week eteplirsen, patients with 50mg/kg/week eteplirsen and placebo-treated cohort. The results from this study became the basis of FDA’s decision. After 24 wees, patients treated with 30mg/kg/week of eteplirsen showed a 22.9% increase in dystrophin measured by IHC, and such an increase was not observed in placebo-treated group. However, since FDA found the IHC method questionable, additional testing was conducted on 11 patient biopsies from all cohorts after 180 weeks posttreatment. The result casted further doubts on earlier results as there was only 17.4% increase in dystrophin. Western blot was conducted to further confirm the study results. Western blot from the 11 patient biopsies showed only 0.93% increase after 180 weeks. As at least 10% of dystrophin increase is needed to translate into clinical benefit, FDA questioned whether the dystrophin level observed was “reasonable likely to predict clinical benefit”.

Functional study through 6-munite walk test showed no significant improvement in ambulation for patients treated with 30mg/kg/week after 48 weeks. On the other hand, patients treated with 50mg/kg/week showed significant change after 48 weeks compared to placebo group. Although comparison of the eteplirsen-treated cohorts to historical controls after 3 years showed an improvement in the 6-minute walk test, two of the twelve patients actually lost ambulation during the study period. And thus FDA concluded that the action of eteplirsen was not sufficiently effective to yield clinical benefit.

On September 19th, 2016, FDA decided to ignore the decisions from the advisory board and granted eteplirsen approval. The approval arose a major debate: “This drug is approved on the skimpiest, most pathetic data I’ve ever seen. It is going to set a precedent that is very uncomfortable,” Diana Zuckerman, president of the National Center for Health Research said. Others who were happy about the approval also stated their reasons: The only two potential near-term treatment for this disease were dismissed out of the hand by FDA earlier this year. If eteplirsen is rejected, DMD patients would have nothing on the market for this disease. Although it is a long shot, eteplirsen is still better than nothing. During eteplirsen’s review process, hundreds of DMD activists descended on the FDA panel review, looking to put maximum amount of pressure on the reviewing committee. “Patients are crying out for the FDA to hear them: they are engaged and knowledgeable and only want the agency to do what is already in their power,” wrote senators Dan Coats and Ron Johnson in a letter to the FDA.

However, many people stated that although eteplirsen is the only drug on the market that is proven to provide some clinical benefit, more clinical research is needed to prove its safety and efficacy, especially considering the price tag. Sarepta has announced that eteplirsen will cost ~US $300,000 a year on average, with the price varying depending on patient weight. The price seems reasonable for a rare disorder, but whether patient should spend so much on a drug with disputed efficacy is questionable. “Eteplirsen is indeed a landmark achievement for the DMD community. However, stronger evidence of efficacy is undoubtedly required to prove its place as a viable DMD therapeutic.”

“The FDA’s job is to get drugs out on the market that are proven safe and effective,” bioethicist Art Caplan at New York University Langone Medical Center said. “In this case, there simply were not enough data in place from the corporate sponsor to make that possible. At the same time, companies shouldn’t be deluding patients and families into thinking that they have enough data to go to the FDA. They shouldn’t approach the FDA unless they truly have the available data to get approved. Relying on patient testimonials and lobbying is not the path to drug approval.”

On the other hand, although much investment has been made in eteplirsen, it is only applicable to a highly specific subset of DMD patients, as only ~ 13% of the DMD patients are amenable to exon 51 skipping.

Some has also stated that the approval is not only bad for the patients, but also a major hit to Sarepta. Since eteplirsen is approved after a negative advisory committee panel review and rejection by regulators in the internal review, Sarepta could face a backlash from the industry as the approval is based on a deeply flawed 12-patient study. However, Sarepta believed in its drug and has stated that they does not want to stop at Eteplirsen as its one and only approval, and be forever the “controversial biotech company.” The CEO of Sarepta, Doug Ingram, said to one of the reporter: “We think Exondys 51 is fantastic,” Ingram said, “but it’s part of a journey. We have some very lofty aspirations: We want to treat as close as we can to 100% of children with DMD and extend and improve their lives.” 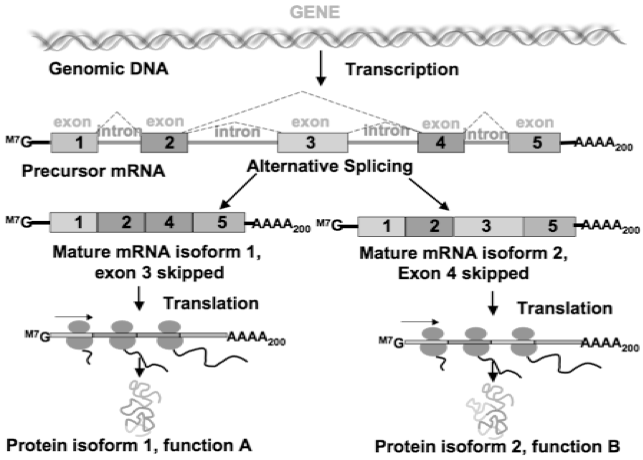 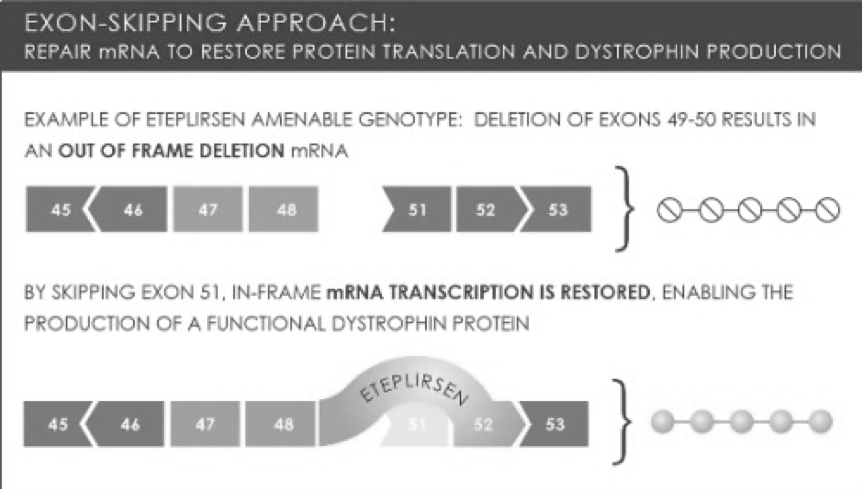 Gene A gene is part of the DNA that encodes function

[1]A year after a patient’s death, Akashi gets FDA all-clear to resume DMD trial. (2017, March 22). Retrieved April 07, 2018, from https://www.fiercebiotech.com/biotech/a-year-after-a-patient-death-akashi-gets-fda-all-clear-to-resume-dmd-trial

[9] UPDATED: The FDA decides that it can’t decide yet on Sarepta’s eteplirsen. (2016, May 25). Retrieved April 07, 2018, from https://www.fiercebiotech.com/fda-decides-it-can-t-decide-yet-sarepta-s-eteplirsen