Economies prior to the late 20th Century 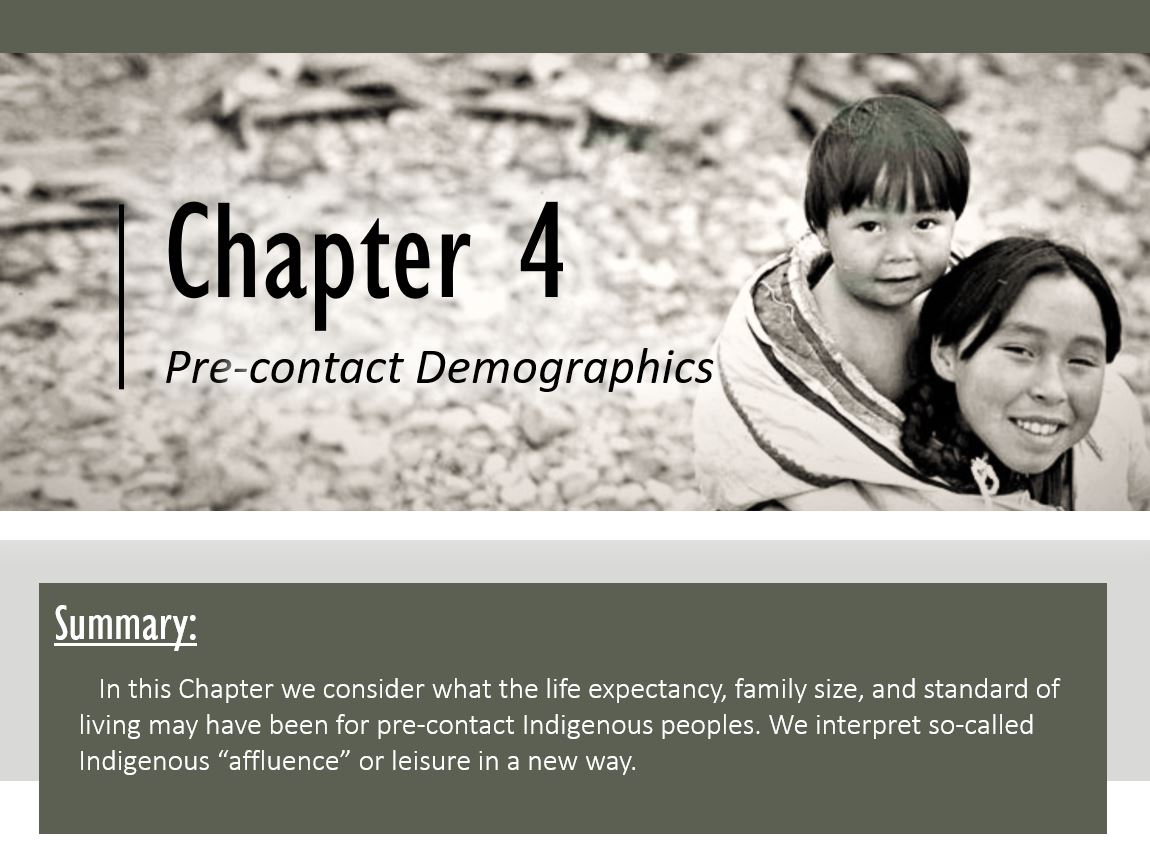 A copyrighted map in Treuer (2014) depicts the likely population density in pre-contact Canada, showing population densities that roughly correlate with the standards of living we have suggested. The most densely populated areas are the Pacific Coast near Vancouver Island and also inland from Haida Gwaai, in a broad swath around Lake Superior including north of Lake Huron, and the north shore of Lake Ontario.

That’s a good point. When the economy is based completely on natural resources, restricting population size means more resources per person. This is the classic Malthusian tradeoff.

The model of Thomas Malthus (1798), incidentally the very first formal macroeconomic model and the very first formal model of demographic processes, presupposes an exclusive reliance on natural resources for earning income. It also presumes that any improvements in technology are random.  In this model, when food per person rises, birth rates rise and death rates fall, so that population grows. And when population grows, food per person decreases, because Malthus assumes that food production cannot keep up with population growth.

Hence, according to the Malthusian model, the standard of living does not rise except temporarily, and population growth always comes back to zero percent.

The “Technology Schedule” diagram below shows the possibilities available to a Malthusian economy. For any given level of technology, the society can either have low population (N) and high food per person (FPP), or vice versa. If technology were to suddenly improve, a given size population could enjoy more food per person, but then population size would grow and move food per person back to the original level. Try tracing this out on the diagram, A→B→C. 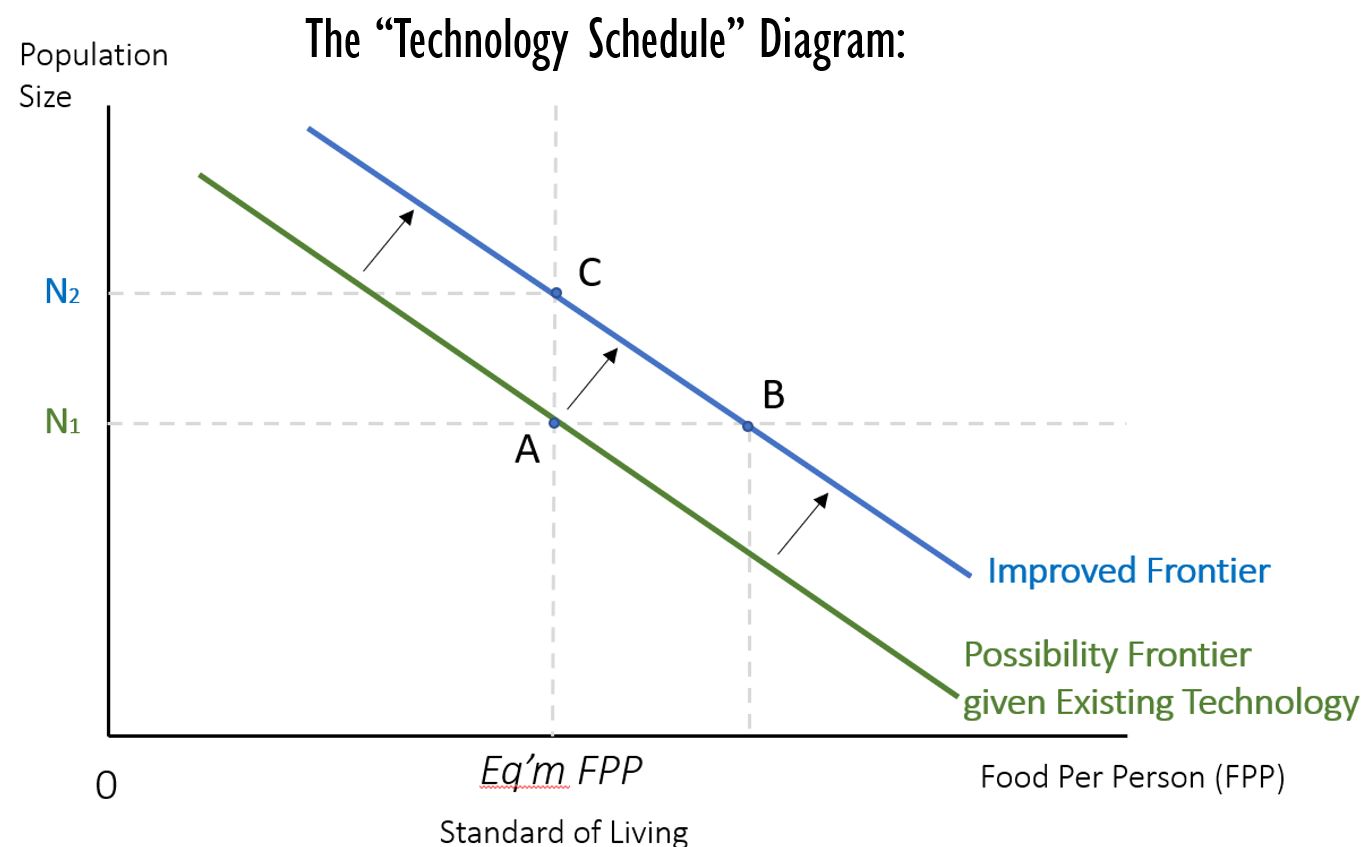 One thing Malthus did not take note of is that, while population is growing and food per person is rebalancing, there is a time of prosperity and, I’m assuming, happiness which could result in better health, time to produce capital goods, and time to learn and generate new technology. So improvements in the standard of living are not useless, even though they are temporary, because they improve human happiness and because they offer a chance to build the technical capacity of the economy.

History has also shown that increases in the standard of living can lead to reductions in the desired number of children; this has occurred in one country after another since the Industrial Revolution. But in the Malthusian model, prosperity is assumed to lead to more children.

Nations in resource-rich areas are like nations with higher technology lines, able to produce more food per person for any given level of population. They are able to sustain larger populations at any given level of food-per-person than Nations in less resource-rich areas. This seems to be a good description of the situation in pre-contact Canada.

As for Nations living on relatively barren landscapes, they might increase their populations by reducing food per person, but as you know, there is only so low that food per person can go. Instead, it is likely that they took steps to reduce population growth so as to keep food per person high enough. Let’s think about pre-contact fertility in this context.

The preponderance of accounts and descriptions of Indigenous families in the early contact period are consistent with a fairly low number of surviving children per couple.

One reason for a low number of children per family was higher birth intervals. As Diamond (2012) explains, only children over the age of four can walk fast enough to keep up with a family moving to a new site. A woman is not likely to be able to carry household necessities as well as more than one child under the age of four.  Another reason for low fertility is that breast-feeding on demand helps space out pregnancies.  Finally, there is evidence of past practice of infanticide among some First Nations living on the Plains, and among the Inuit. Selection of stronger, probably male infants would contribute to a physically stronger population with a higher proportion of successful hunters.

Also for reasons of group mobility, abandonment of the sick and elderly was practiced in many cultural groups when circumstances were pressing. In pre-contact Europe and England, life expectancy at birth was low, around 25 years.  A baby surviving to age 5 or even 15 would still have an additional 25 years of life remaining, for infancy and childhood were very dangerous in Europe.  Infancy and childhood were probably less dangerous on Turtle Island, with its clean drinking water, wide open spaces for toileting, and lack of epidemic infectious diseases. So while fewer Indigenous children may have been born or allowed to live, more of those children would have survived childhood.

On Turtle Island, adult life was at least equally dangerous compared with European adult life. Most European men farmed using heavy tools and large draft animals. On Turtle Island, most men hunted with simple weapons requiring them to get close to very large and dangerous animals. As previously mentioned, the hunt could take days and required endurance, exposure to the elements, exposure to predators, exposure to hostile neighboring tribes, and the possibility of drowning, getting lost, being struck by treefalls etc.

Some First Nations organized regular raids on other First Nations and were in regular danger of attack and the destruction of homes and food stores.

Inasmuch as men bore the brunt of casualties in hunting, long-distance trade expeditions, and armed conflict, we expect that the sex ratio (ratio of men to women) was significantly less than one for older teens and adults, despite any selection for male infants, and despite the dangers of childbirth to women of child-bearing age. This may explain the acceptance of polygamy in many Indigenous cultural groups including Plains First Nations and Inuit communities.

Sahlins describes an affluence enjoyed by hunter-gatherer societies – not an affluence of material goods, but an affluence of leisure. He describes several case studies demonstrating that, in hunting and gathering societies in marginal natural environments, adults spend on average only three to five hours per day working in food production.

Consider, however, that it makes sense to explain limited food production not as a birth control strategy but as a conservation strategy.

Indeed, the aforementioned Sahlins, who is keen to reject microeconomics as a valid lens for understanding Indigenous societies, ironically makes use of the concept of diminishing marginal returns in hunting to explain the large amount of leisure time in such societies. The more that is hunted, the fewer animals remain and the more difficult they are to find. We should also consider that overhunting a species would impact its ability to grow back to its original population size.

The growth of an animal population is typically a logistic function of the number of individuals: when there are enough, but not too many individuals, the animal population grows rapidly, but as the species begins to crowd its habitat, the growth rate decreases, eventually going negative.

But it’s not even as simple as computing the sustainable yield for one species.  Species interact with other species and with climate. Wild population stocks tend to cycle between over- and under-population.

Prey animals such as herbivores reproduce quickly and experience population surges when predator populations are lower than average. Predator numbers eventually rise in response to the available prey, but later fall as predators deplete the prey.

Incorporating this dynamic into the sustainable yield calculations complicates the analysis significantly. Add in the randomness of weather and disease, and human hunters can hardly predict or manage the impact of their hunting choices and family size choices. The conservative, survivalist approach would be to hunt less than you think is sustainable, and to have few children. This agrees with the widespread Indigenous norm of not taking more from nature than you need.

The so-called “leisure” commented upon by Clark could be something quite different from leisure:  it could be conservation. The low-hunting, small families approach makes sense given a slow-growing, unpredictable resource base. Sahlins (1972) likes this idea too: “Mobility and moderation put hunters’ ends within range of their technical means.”

The so-called leisure observed in hunter/gatherer communities could also be the result of hunters saving their efforts for peak season. It could be knowing exactly when the sap is ready, the fish have spawned, or the geese are coming. It could also be a more holistic approach to life that prevents people from storing up food and other material goods.

We have seen that population density was likely correlated with what we guessed to be the standard of living among the different pre-contact Indigenous groups. This suggests that economies were very dependent on the resource base, and that the Malthusian model has relevance.

Societies in resource-rich areas were able to have larger populations. Resource-poor areas had lower populations. Nations there had an incentive to hunt modestly, careful not to over-exploit the resource base. Families needed to be smaller.

In our next Chapter we will discuss traditional Indigenous values, many of which harmonize with the economic realities they faced. This will not be an exhaustive treatment of Indigenous values but will focus on those values closely related to productive activity and the distribution of goods.