Infrastructure goods are  public goods: goods which can be shared without detriment to any one person, and from which people are typically not excluded. There is a classic “public goods problem” familiar to students of economics. The problem is called free riding.  People try to ride free on public goods. They are not willing to pay their fair share and they tend to understate their willingness to pay.  That is why public television stations and public radio stations ask viewers and listeners to contribute but end up relying on grants from governments and charitable foundations.

Because of the public goods problem, it’s up to government to make sure there is enough infrastructure in the community. Prior to the 1970s, Indian Agents supervised much of what went on in reserves, and Band governments were not entrusted with much responsibility.

The special challenges facing remote communities are discussed in Chapter 29. To consider the difficulties inherent in funding infrastructure on reserves, both northerly and southerly, let us explore the particular case of water systems.

Despite Canada’s status as the country with the most fresh water in the world, over 25% of reserves have substandard water or sewage systems.[1] Faulty water systems, necessitating advisories to either boil the water or avoid using it, have plagued First Nation reserves for years and have appeared in newspaper headlines time and again. Prime Minister Justin Trudeau pledged in his 2015 election campaign to end long-term drinking water advisories by March 2021.  Two years after he was elected, Trudeau’s government had funded 27 water system upgrades or replacements at an average cost of over 26 million dollars each, but 67 systems either remained broken or had become broken in the meantime. Trudeau had added water systems used by First Nation fire halls and community centers to the government’s to-do list, adding to the challenge.

The Parliamentary Budget Office (2017b) has estimated that it would cost 3.2 billion to build or repair all the needed water and sewage infrastructure on reserves, and 361 million annually for operations and maintenance. 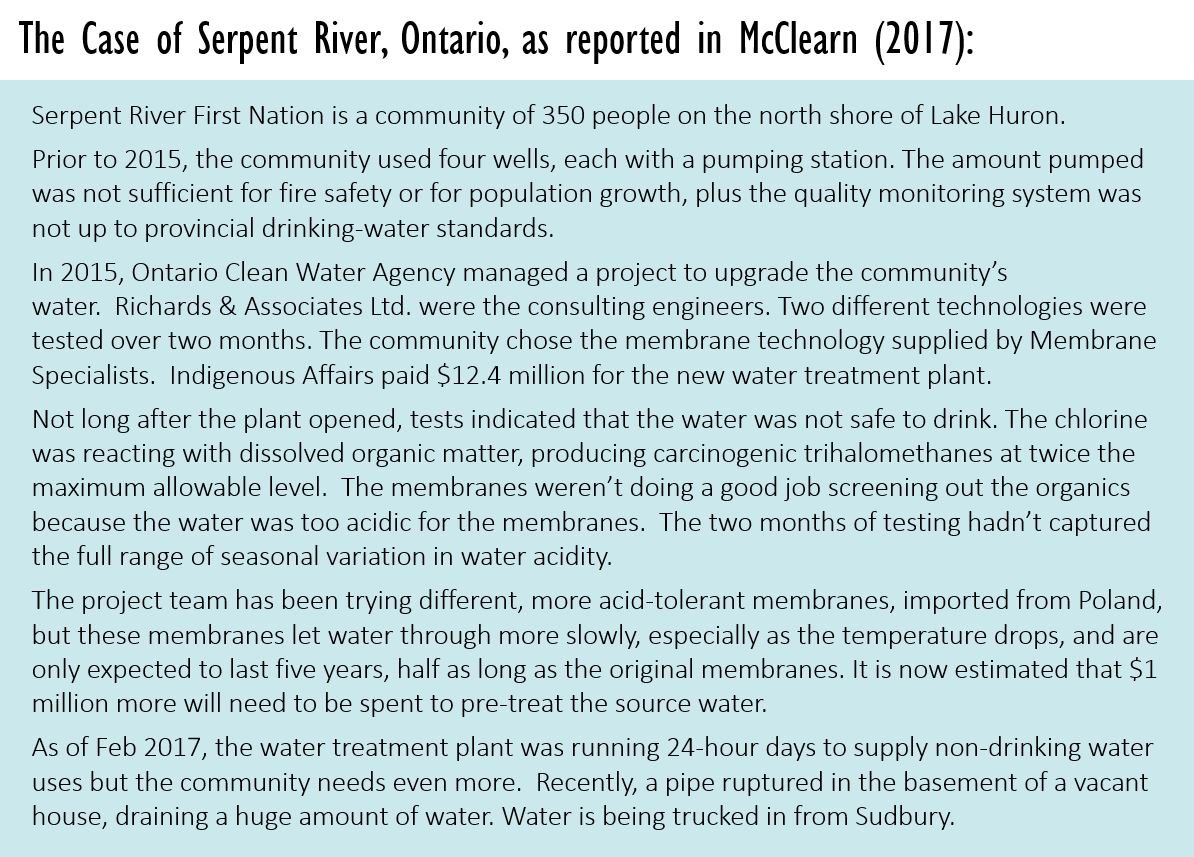 The Globe and Mail began a report on failed water systems in summer 2016, obtaining Indigenous and Northern Affairs’ records and interviewing engineers, project managers, and First Nations leaders. They filed a request under the Access to Information Act to get Indigenous Affairs’ Integrated Capital Management System database, which includes risk assessments for completed projects, plus a 2015 study done for Indigenous Affairs by Orbis Risk Consulting.

On the basis of this information, Matthew McClearn wrote several Globe and Mail articles, and Dean Beeby wrote another. They identified three major problems: lack of regulation, fragmented decision-making, and lack of expertise.

Provincial regulations do not apply to reserves.  Indigenous Affairs’ regulations are less stringent than provincial regulations.  Modern municipal systems are built to provide 450 litres per resident per day, but many First Nation systems provide only 180 litres. But even if stricter regulations were imposed, there is still the matter of being able to achieve the standards in the regulations.

Graham (2018) originally supported the Safe Drinking Water for First Nations Act, which was passed in 2013 to establish water quality guidelines at the federal level, since reserves are not obliged to meet provincial requirements. However, he now understands why First Nations were opposed:  the Act does not give First Nations any power to make rules, and it does little to lessen the burden of developing, maintaining and operating the water systems.

As of early 2021, no new regulations around safe drinking water had been formulated under this Act.

If INAC were responsible for construction, it might send approval and funds more quickly.

If INAC were responsible for service delivery, it might provide funds for more rigorous testing prior to design.

If the designer were responsible for construction, the design might be more practical.  Most municipalities are now using the same firm to design and construct.

Even water system specialist engineers have failed to anticipate some of the complications in remote northern communities, such as permafrost, very cold ambient temperatures, acidic water, and very high dissolved organic matter content.

In addition to the three problems identified by the Globe and Mail, which we just examined, there are others:

Meanwhile, the money which is released is typically only 80% of what is required for either construction or operations. It can be a struggle for Bands to come up with the remaining 20%.

According to the Auditor General of Canada (2021), the government uses a formula created in 1987, updated for inflation, to determine how much it pays for operations. Spending has depended on this formula, rather than on achieving goals and meeting quality standards. As a result of underfunding, in 2018 water systems operators on reserve earned 30% less than operators elsewhere.

Many rural communities rely on each house having its own well for drinking, bathing, and cleaning, and its own septic tank or septic bed for wastewater and sewage. The federal government does not fund private wells and septic on reserve; it only funds systems used by five or more households.

On the matter of community size, Graham (2018) has questioned the ability of small communities to properly operate sophisticated systems, sharing the conclusion of the American Environmental Protection Agency that a minimum of 10,000 users is required for a viable system.

After the aforementioned Safe Drinking Water for First Nations Act was passed, the Atlantic Policy Congress, representing 30 Chiefs in the Maritimes, Quebec, and Maine, worked with the federal government to propose a regional water authority serving more than fifteen First Nations.  In such an authority, Graham sees a way out of the current problems with water delivery.

Graham has proposed that this water authority be subject to laws developed by a First Nation Environmental Protection Agency. This agency, not yet in existence, could evolve to handle other matters as well, such as solid waste disposal. First Nations could decide whether or not to come under the auspices of this agency.

The Atlantic First Nations Water Authority, the first Indigenous-owned-and-operated water authority in Canada, is slated to begin operations in the spring of 2022.

Next, we turn to the challenge of providing residential housing in non-urban Indigenous communities.