Discrimination means treating people differently on the basis of characteristics which are not relevant to their character or their ability to perform a task. Discrimination may be intentional, the result of consciously articulated prejudice or dislike; it may be unintentional, the result of unconscious bias; and it may be due to a network of institutional arrangements and cultural practices which result in systemic discrimination.

We may give preferential treatment to those who are similar to ourselves (endophilia), or we may treat unfairly those who are different (exophobia).[1]

Thomas Schelling (1971) has shown that even small degrees of endophilia, such as wanting 30 percent of one’s neighbours to have the same cultural background as oneself, can lead to highly unequal or highly segregated outcomes. Using nickels and dimes representing people of two different races, and laying the nickels and dimes on a chessboard, he showed that if dissatisfied people are allowed to move to vacant squares, and the game continues until each player is satisfied, then even a slight preference for having neighbours similar to oneself can lead to a highly segregated distribution of nickels and dimes.

Speaking of segregation, in a 2018 poll only 30% of Canadian respondents said they had spent time on a reserve, with 38% never having even driven through a reserve.  68% of those interviewed said they had no Indigenous friends or acquaintances.[2]

Ironically, endophilia and exophilia may be more common in places where the population is already very homogeneous. Doug Saunders, columnist for the Globe and Mail, has observed that anti-immigration sentiment is most prevalent in places where there are hardly any immigrants or minorities.  “With very few exceptions, the only places where you’ll find more than fringe levels of support for candidates opposed to immigration are places where less than 5 percent of the population are from immigrant or racial-minority families….White people living in “majority-minority” cities – those who could be said to be numerically or culturally “threatened” – do not vote for such candidates in more than minuscule numbers.”[3]

Who we hang around with makes a systemic difference.  A lot of jobs are found by word-of-mouth.  Employers tend to recruit from the same agencies and areas they always have.  And minorities may be tempted to avoid risk of rejection by applying only to employers already known to hire minorities.  What we just said about jobs also applies to educational programs, housing, recreational opportunities and more.

The 2020 worldwide Black Lives Matter protests, triggered by the killing of George Floyd, highlighted the degree to which exophilia and endophilia are systemic in law enforcement and other social institutions.   During that time, a police car dash-cam video[4] emerged of Athabasca Chipewyan First Nation Chief Allan Adam being suddenly knocked over and beaten by a police officer arriving on the scene, while he was calmly standing and cooperating with the first police officer.  Before the public saw the video, the RCMP told the public that they had reviewed the video and “it was determined that the [police officer’s] actions were reasonable.”

Discrimination can literally mean the difference between life and death.  It also has an impact on employment and earnings.

Schiller (1973) noted that the earnings gap between non-minorities and minorities is not just due to lower wages for minorities.  Minority workers are “hired less often, for fewer hours, for less desirable jobs, and at lower wages.”

What can explain this package?  There may have been past discrimination which accounts for minorities having poorer housing, education and health backgrounds, which affects their employability.  There may be present-time discrimination against minorities.  Discrimination in the present leads to minorities achieving less experience and less skill accumulation due to lack of opportunity, leading to reduced job opportunities in the future. 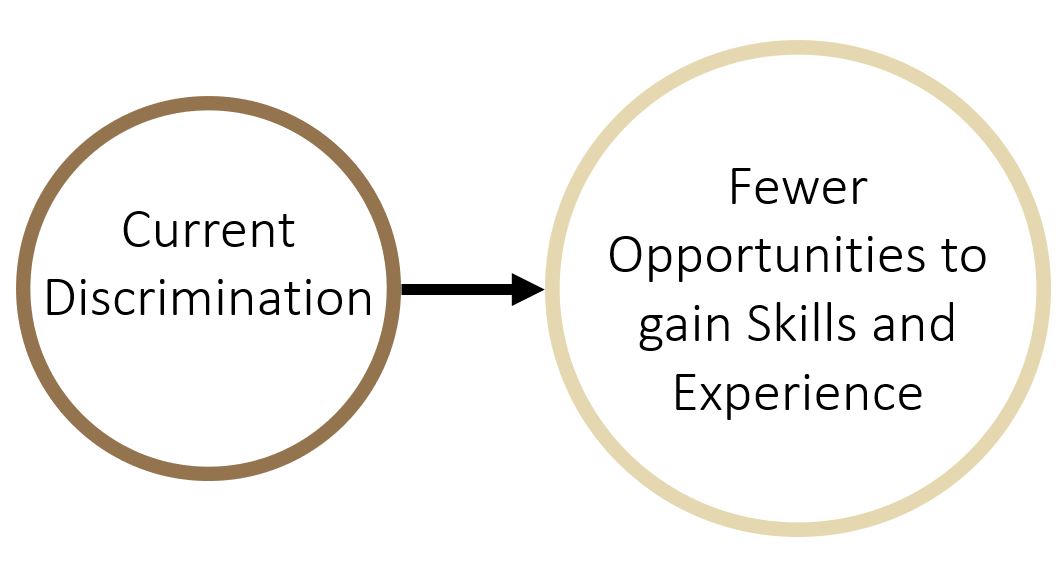 Model 1: Discrimination as an Expression of Employers’ Preferences

Charles and Guryan (2008) used US state data between 1972 and 2004 to confirm that the hourly wage for Black employees relative to White employees was negatively correlated with the prejudice of the marginal, rather than the average, White person who participated in the General Social Survey.[5].

In this model, non-minority workers have a strong stake in maintaining the status quo, so that they can continue to earn a wage that is higher than it otherwise would be.

Minority workers obviously suffer from being shut out of opportunities to work, likely forced into occupations they would not have chosen, and competing for the limited number of jobs available to them.

The employers who are not prejudiced may preferentially hire minority workers, because their wage is lower.

In a 2020 paper, Ricard Gil and Justin Marion study racial segregation in movie theatres in American cities of the mid-South and West Coast during the decade 1945-55. They find that in Washington DC, where theatres were desegregated in 1953, theatre revenues fell after desegregation. Their analysis leads them to conclude that the decline in revenue was because White customers were unhappy with the theatres for desegregating.

In his 1971 chapter The Economics of Racism, Michael Reich argues against the Becker/Arrow model. He does not believe that discrimination represents a cost to employers and a benefit to non-minority workers. Reich believes that racism benefits employers, who use it to “divide and conquer” the working class. In his model, firms have a strategic interest in maintaining a wage gap between minority and non-minority workers. Implicit in his argument is the belief that firms have market power, power to pay both categories of worker a wage below the value of their marginal product. Non-minority workers will not complain because at least their wage is higher than the wage of visible minorities.

Robin Diangelo, author of White Fragility: why it’s so hard for white people to talk about racism, agrees: “If poor whites were focused on feeling superior to those below them in status, they were less focused on those above.”[6] You may be able to name some politicians who exploit this dynamic.

Because the working class is divided racially:

You can see from the points above that workers in the majority group are likely to be worse off because of the discrimination which privileges them with higher wages than minorities receive.

Reich wondered how to measure racism, particularly white:black racism. Many authors measure the difference in wages between African Americans and White Americans, after accounting for worker characteristics such as education, health, age, and other factors. But Reich believes that the only reason these characteristics are different in the first place is because of past discrimination. Thus, he measures racism by the overall difference in wages between the two races.

Reich collected statistics for various standard metropolitan areas in the United States in 1960. He found that, after accounting for differences in cities’ average incomes, industrial structure, occupational structure, and region, the degree of racism in a city could predict several things. The greater the degree of racism, i.e. the lower was the median Black wage compared to the White wage, the smaller the percentage of the labour force that was unionized. The more racism there was in a city, the greater the inequality of educational achievement among White men ages 25-29. And the more racism there was in a city, the more unequally income would be distributed among Whites: the top 1% of White earners would receive a larger fraction of White-earned income, and the city’s Gini coefficient would be higher.

I would like to propose a third way of looking at discrimination, where we consider that discrimination might be motivated by a particular goal. The underlying racism (or sexism etc.) might serve the purpose of justifying and facilitating the acquisition of economic advantage and social privilege.

Let’s consider how racism fits into a model of the demand and supply for a resource like Indigenous land. Recall that the cost of producing or acquiring one more unit of something traces out its Supply Curve. Similarly, the benefit to consumers from each new unit of the good traces out its Demand Curve.

When there are large numbers of producers and consumers trading freely in a market, the price that prevails balances the marginal cost and the marginal benefit to the people participating in the market.

Let’s think about drawing a Demand and Supply diagram, from the point of view of settlers only, for the activity of dispossessing Indigenous peoples. It makes sense to consider settlers’ point of view inasmuch as their numbers and their decisions have driven the dispossession.

How might we draw the marginal benefit to settlers of dispossessing Indigenous peoples? Let’s put acres of land expropriated on the horizontal axis, and marginal benefits, measured in dollars, on the vertical axis. We must hold the number of settlers constant to isolate the relationship between quantity expropriated and marginal benefit, and when we do we expect to see a downward-sloping line, because the first acre is most desperately wanted and evokes the highest willingness-to-pay.

Observe the graph below. This demand curve would shift to the right as more settlers arrived: more land would be desired at any price level. 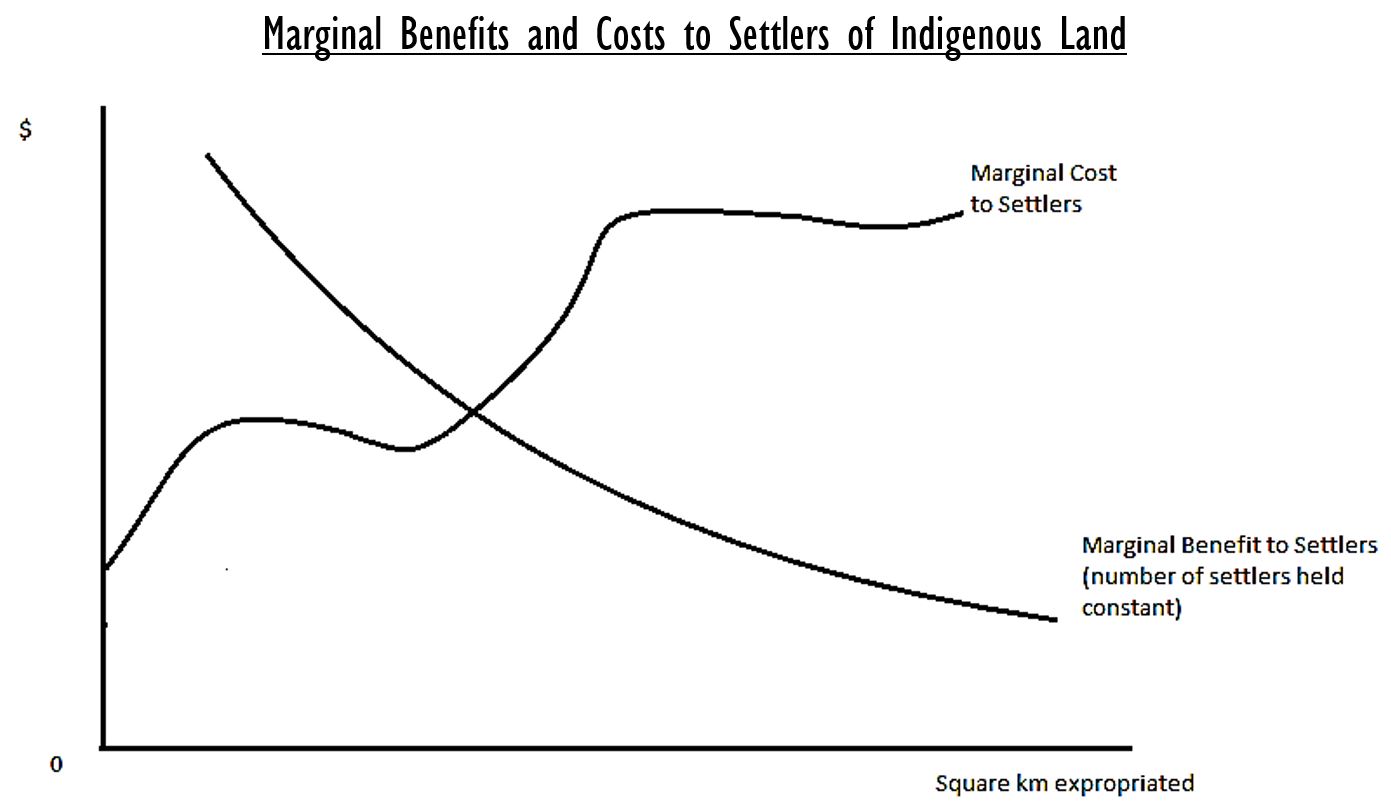 These could represent points where an Indigenous group is pushed to the point of resistance, either violent resistance or a nonviolent diplomatic campaign. There could be points in time where the government, or non-Indigenous citizens, or foreign governments and citizens are finally outraged by what has happened and take actions to protect Indigenous rights.

At what times in Canada’s history have there been major changes in the marginal cost of acquiring Indigenous land?

In the model we have just created, discrimination and the racism underlying it can be understood in three ways.

Many non-Indigenous Canadians say that they should not be held responsible for what happened to the lands and the lives of the Indigenous peoples of Canada.

Any fraudulent or coercive land transactions happened long ago. To quote Diangelo (2018) once more:

“While I am aware that race has been used unfairly against people of color, I haven’t been taught to see this problem as any responsibility of mine; as long as I personally haven’t done anything I am aware of, racism is a non-issue. This freedom from responsibility gives me a level of racial relaxation and emotional and intellectual space that people of color are not afforded as they move through their day.”

Yet, if we have benefited from the racism of the past, if we enjoy any privilege inherent in existing institutions, traditions, and expressions of culture without working to include the marginalized, then we perpetuate the injustice.

When we consider the history of Indigenous: Settler relations in Canada, we might describe an initial respect and mutual consideration, based on the idea that each could be a trading partner and military ally of the other. Later, however, with trading routes and political borders established, and many more settlers having arrived, racism on the part of the settlers began to increase. After more than a century of severe discrimination, settler attitudes began to improve. The most recent period represents the most rapid repudiation of racist thinking and policies.

This suggests a racism: time function or a racism: economic development function in the shape of an inverted U – the classic pattern known as the Kuznets Curve.

Simon Kuznets, writing in 1955, proposed a U-shaped relationship between a country’s GDP per person and the degree of income inequality within the country. Figure 3 on the next page is an international Kuznets curve created by Gallup (2012) using 2010 data.[8] While Gallup has found a fairly convincing Kuznets curve across countries in 2010, he concludes that a Kuznets curve does not well represent patterns of inequality for individual countries over time.

The four models of discrimination we have discussed in this chapter offer only a partial understanding of discrimination or dispossession, because Economics can only slice into a problem according to its own, limited way of looking at the world, one that analyzes material benefits and costs. Nevertheless, I’m sure you’ll agree we have learned a lot about discrimination this way.