We now know about the great variety of Indigenous Communities. There are people in regular cities, towns, and rural areas across Canada: perhaps geographically isolated from one another (Toronto), perhaps living in distinct neighbourhoods (Winnipeg), perhaps forming the majority of the population (Moosonee). There are traditional reserves, which may or may not be using some of the Amendments to the Indian Act to increase their financial options. There are Métis settlements. Then there are the communities governed by different kinds of regional authorities created by Modern Treaties.

This variety serves as an extensive natural experiment as to which forms of organization, governance, and financing best promote well-being.  In years to come the data from these various communities will be mined for insights by researchers, perhaps by you!  For now, the data is limited.

In this chapter we’ll briefly present each category of community and its economic situation. Then in the following chapters we will go into detail about economic challenges and opportunities, especially for reserve communities.

According to reportage in the Spring 2019 edition of Corporate Knights, Indigenous business represents about 1.4% of the Canadian economy.  This falls short of the number it should represent if it were proportional to population, but is still quite an accomplishment considering the history.  Indigenous business comprises about 45,000 firms generating 30 billion dollars.  The Corporate Knights estimate roughly agrees with the Canadian Council for Aboriginal Business’s estimate of 50,000 aboriginal-owned businesses.

Many reserves are faring well economically, and host some of the Indigenous businesses we have just described. For example, Membertou First Nation near Sydney, Nova Scotia boasts ISO 9000 designation[2], an international standard of management quality, and its Development Corporation was named one of Canada’s best-managed companies in 2019. In 2020, Membertou joined with other Mik’maq communities and with Premium Brands Holdings Corporation in a billion-dollar deal to purchase Clearwater Seafoods Incorporated, the largest holder of shellfish licenses and quotas in Canada. The Community Well-Being score for Membertou First Nation in 2016 was 70, not far from the average score for non-Indigenous communities, 77.5.

At the same time there are many reserves where poverty is endemic. Almost one quarter of First Nations are receiving some kind of intervention to help them pay their debts.[3] According to Flanagan (2019), the first step is to require communities to create a plan for addressing their budget deficits and debts. The second step, if needed, is to require the community to hire an external accountant to co-manage finances. Finally, Indigenous Services Canada imposes third-party management on the band: a person outside the community is hired to run the finances . There were only seven reserves under third party management in 2018.[4]

Flanagan (2019) found that whether or not a community was under default management correlated strongly (and inversely) with its Community Well-Being Index score, even when accounting for own source revenue, remoteness, and existence or not of a property tax system.

In 2015/6, about 64% of First  Nations’ revenues came from the federal and, to a much lesser degree, provincial and territorial governments. The rest came from own-source revenue (OSR). Own-source revenue is income from Band-owned businesses, royalties from resource extraction, rents from leased land, payments from Impact Benefit Agreements, and interest on trust funds. The ten highest-earning First Nations accounted for 18% of the total own-source revenue.  Concludes Flanagan (2019), “OSR is about as unequally distributed as income in the larger Canadian society”.

In our last chapter we described the funding and rights of the eight Métis Settlements in Alberta. While census data is available, the Community Wellbeing Index is not computed for them.

Although Métis have higher median income than off-reserve First Nations, and typically score better on other economic indicators as well, both groups experience some of the same economic pressures. For both groups between 2005/6 and 2015/16[6] :

Most Inuit are living  in areas covered by Inuit self-government agreements: Nunavut, Nunavik, Inuvik, and Inuvialuit. For Inuit between 2005/6 and 2015/6[7]

Instead, let’s have a look at their  Community Well-Being scores. We’ll use the 2016 scores published by Indigenous Services Canada (2020a, 2020b). Recall that the Community Well-Being Index (CWB) is a weighted average of  indicators about income, employment, housing, and educational achievement.

In the Yukon, there are more than a dozen First Nations covered by the same Umbrella Final Agreement. Unfortunately, their Community Well-Being scores have not been computed, probably owing to the communities’ small sizes. In the Northwest Territories, the four communities in the Tlicho Final Agreement have scores ranging between 56 and 64.  These scores are lower than the 66.3 which is the average for First Nations communities in the Northwest Territories and Yukon.

The four out of five communities under the Sahtu Dene and Métis Comprehensive Land Claim Agreement for which CWB scores were found have scores between 59 and 66, a little higher yet still slightly below average.

The six Inuit communities of the Northwest Territories, organized as Inuvialuit,  have scores ranging between 63 and 80. The score for the Inuit of Inuvialuit and Nunavut combined is 60.7, implying that Nunavut  scores are lower than those in Inuvialuit.

The Inuit communities of Nunatsiavut in Newfoundland-Labrador have scores ranging from 62 to 71. Those in Nunavik, part of the James Bay and Northern Quebec Agreement and its derivatives, have scores between 53 and 76, a lower average but a wider range. The 76 for Kuujjuaq is an outlier since the second highest score is 65. Kujjuaq is the largest community in Nunavik and its administrative capital. Since all the Inuit have self-government agreements, we cannot compare their Community Well-Being scores to those of Inuit without such agreements.

We do know that for Canada overall, the average Inuit community score (61.3) is higher than the average First Nation community score (58.4), despite Inuit populations being smaller on average, and their communities being located further north. This suggests a positive impact from self-government agreements. 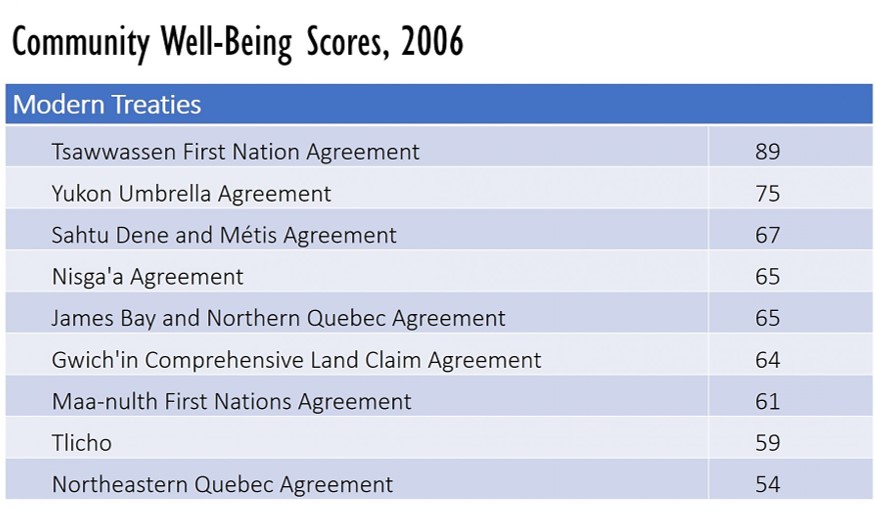 Based on these data, which do show an advantage for communities with modern treaties, the authors were not overly excited about the Modern Treaties. They noted the favourable location of many First Nations having a modern treaty. They also point out that, if Prairie First Nations were excluded, Historic Treaty community scores would look better than Modern Treaty community scores.

In British Columbia, many of the First Nations who obtained self-government agreements are located in the south and were already doing well prior to obtaining a modern treaty. Data on two of these Nations, Tsawwassen with a score of 83 and Nisga’a with a score of 64, show they were doing better in 2016 than the average BC First Nation (score of 62.9).

We observe that the self-governing Inuit and Cree, as well as Sioux Valley Dakota First Nation and two communities in BC with modern treaties, appear to be doing better economically than they might be otherwise. This accords with Flanagan and Johnson(2015), who found a statistical correlation between CWB scores and self-government agreements for Canada’s First Nations. However, evidence from the Northwest Territories is not as positive.  Clearly self-government agreements are not a ticket to instant prosperity.  Our Chapters 24-29 describe some of the hard work that needs to be done to bring prosperity to small, often isolated communities which in many cases suffered a hundred years of dispossession and interference.

A note on Economic Inequality:

We now have a feel for the current economic status of the various Indigenous communities in Canada. What about the distribution of income within the communities?

A detailed look at inter-community income distribution is beyond the scope of this book, but we do have data to suggest that income inequality is not extreme.

As we see in the table above, data from the 2016 Census indicates that income inequality in Indigenous communities is roughly the same as in non-Indigenous communities. However, we should note that the distribution of  income is less equal on reserves.  On reserves we typically have a dozen high-paying jobs associated with Chief and Council, perhaps a dozen more associated with the heads of various portfolios, but not many other high-paying jobs or high earners on reserve.

In one university class, students tasked with selecting reserves and comparably sized municipalities, similarly distant from a major city, in Ontario and Manitoba, found that Gini coefficients were three times as high for reserves as for municipalities.[8]

For more insights into on-reserve inequality, see our chapters on Governance and Employment. Employment and wage data may be more favourable for women than for men on reserve, owing to the prevalence of women in the types of occupations likely to receive government funding. In our next chapter we explore government funding and whether it is sufficient for its purpose.