The figure above shows a two-step path to the wage gap.  First, each group achieves different levels of education, health, skills, experience, and other relevant characteristics.  Second, each group is offered a wage supposedly based on those achievements. We will quantify these two effects using Econometrics.

Econometrics is the use of statistics to model, explain and predict economic data. Its most powerful tool is regression analysis. Regression analysis finds best-fit lines or equations to describe data, as though the dependent variable  is a function of various explanatory variables. 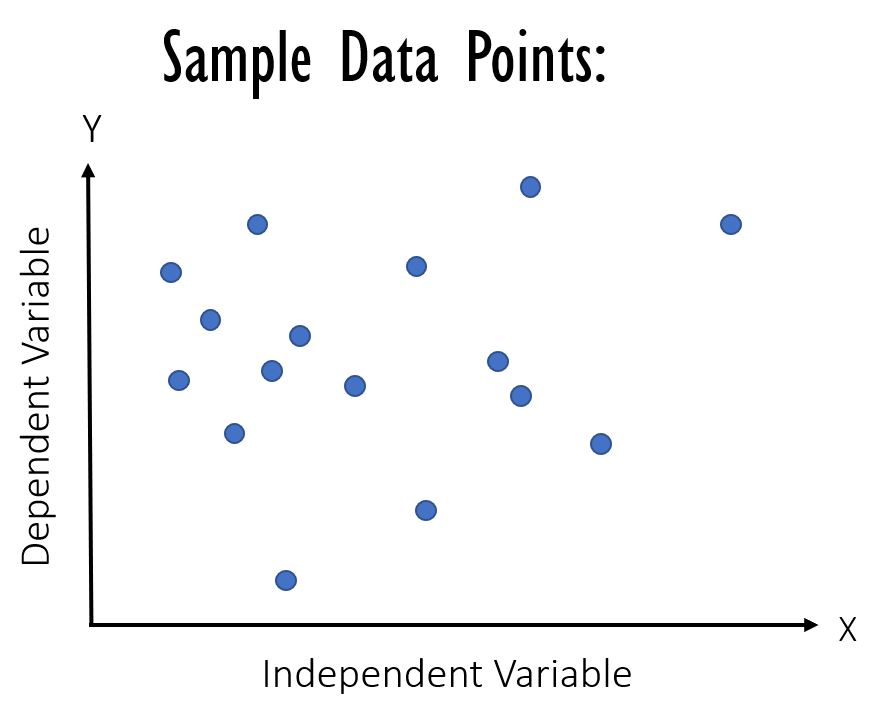 The regression software would find a best-fit line through all the data points, something like: Wi = 90 + 1.05 Hi + εi (with weight in pounds and height in inches) where Wi is the weight of person i, 90 is the vertical intercept (representing 90 pounds), and Hi is the height of that same individual. 1.05 is the coefficient in front of H, meaning it is the slope of the best-fit line; it is the marginal effect of height on weight. We can’t really think of it as the degree to which height explains weight, because it will be a different size depending on which units we use for height, whether inches or centimeters or whatever. εi is a random error for person i.

Have we proved that height causes weight? This is the essence of econometrics.  Pretty easy, right?

How does the regression analysis software find the best-fit line or best-fit space? The most basic technique is called ordinary least squares (OLS). In OLS, the software finds the line which minimizes the distance between itself and the data points.

A “deviation” is the error εi , the difference between our dependent variable, call it Y, and our expectation of what Y will be based on the explanatory variables.

The “hat” sign above the Y stands for expectation, or estimate. Why do we square the deviations?

Two reasons. First, we don’t care if the deviation is positive or negative, below the line or above it. They both matter and we don’t want to subtract the negative ones from the positive ones. Squaring means we are counting them all.

Here is a checklist for performing regressions. 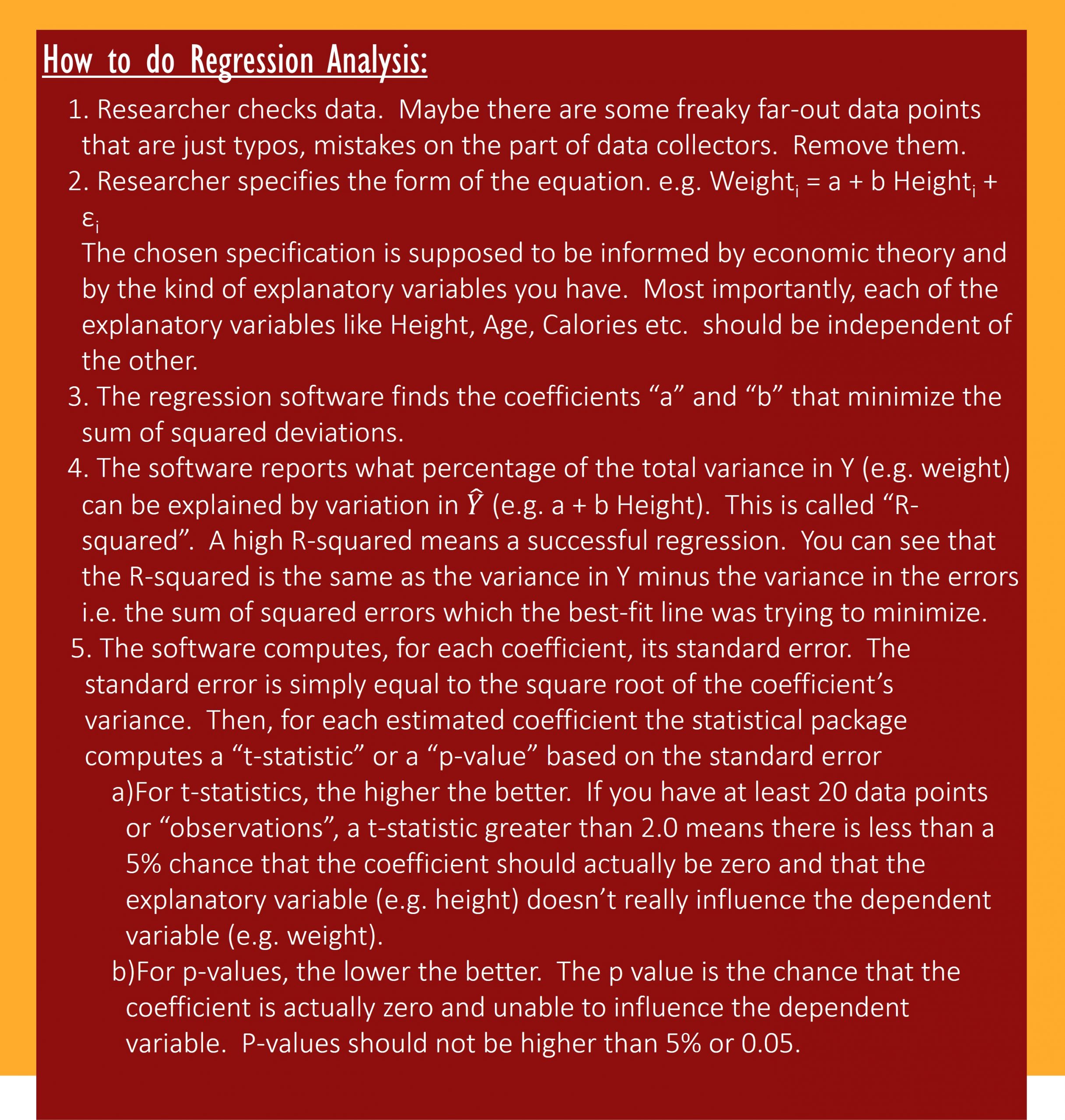 Sometimes we want to use qualitative information in our regression. In our Weight regression example, we could use Gender to explain weight, not just Height. But what number do we type in for Gender?

Let’s say we perform the regression:

An Example from Automobile Insurance:

Robinson, Sloan, and Eldred (2018) use a regression to relate the probability of a car accident to driver characteristics which are known by the insurance company. They used data from four American states in 2010-2012. Their results are displayed below. 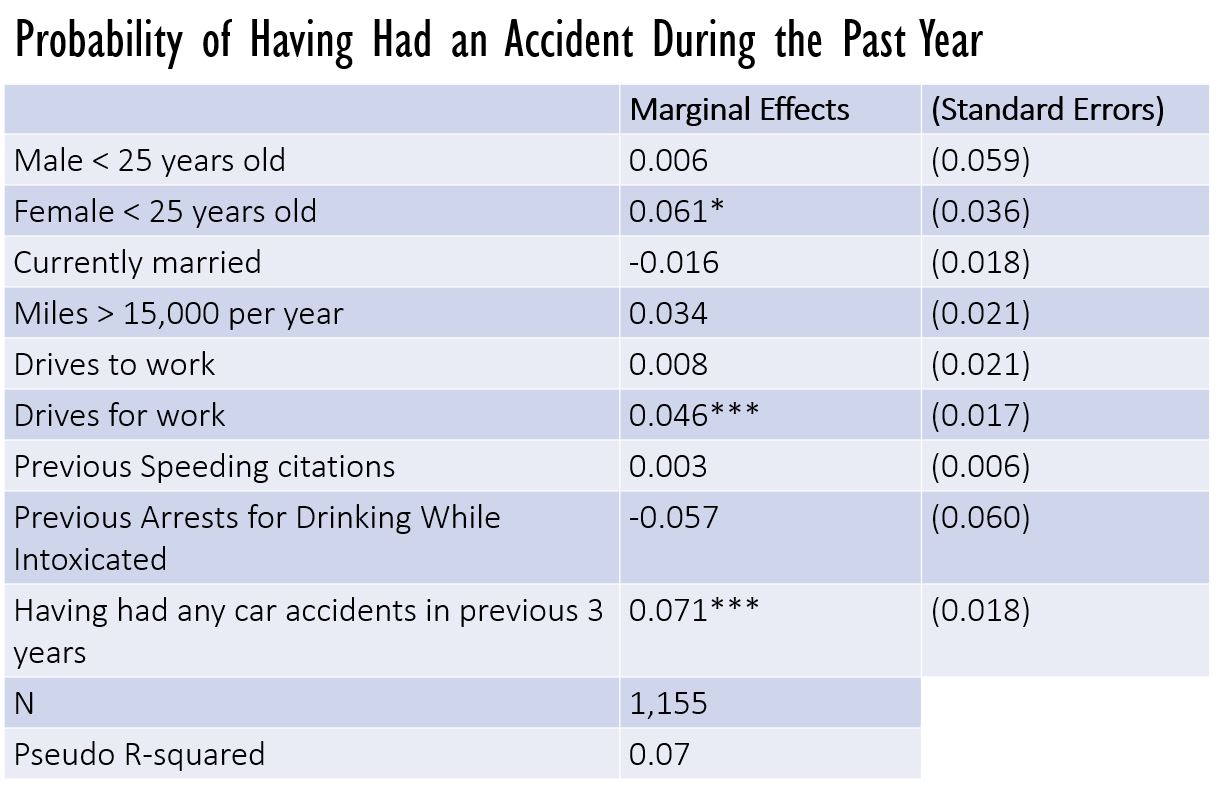 The N tells us that there were 1,155 data points, 1,155 people in the study. The R-squared is very low, suggesting that some important explanatory variables have been left out of the regression. It’s called a “Pseudo” R-squared as this is a different kind of regression, where the dependent variable is a dummy variable  (accident yes = 1, accident no = 0).

We see that being a young man is positively correlated with having an accident. But look at the standard error! It is just about the same size as the coefficient, the marginal effect.  So we can’t really be sure about the correlation.

When we look at young women, we see an effect that is larger in relation to its standard error.  It has an asterisk next to it, indicating that its p value is less than 0.10.  That means that there is less than a 10% chance that this is a false positive. That’s still higher than the 5%-or-less chance we like to see, though, so we don’t put much confidence in this correlation.

Donna Feir (2013), for her paper entitled, Size, Structure, and Change: Exploring the Sources of Aboriginal Earnings Gaps in 1995 and 2005, collected data on Canadians aged 25-55 who make more than $100 per year in wages and salaries. With that data, she compared the yearly earnings of Métis and Status persons living off reserve to the yearly earnings of non-minority Canadians. Just using the fact that annual earnings is equal to weekly earnings multiplied by the number of weeks worked, she found that about half the gap between the two groups was due to Métis and Status persons working fewer weeks per years than non-minority Canadians.

Comparing First Nations men off-reserve to non-minority Canadians, she found that about half the difference in weekly earnings in 2005 was due to characteristics being rewarded differently. It was the same for women.

How did Feir calculate this? She used a technique called Blinder Oaxaca Decomposition.

Here is a simple example using data collected by a group of students at Queen’s University for various First Nations and municipalities of similar size and location in Ontario. The data excludes fly-in communities.

Here are the average values of the data used in the regressions:

As you can see from the Table above, First Nations in the sample had lower median income, lower employment rates, lower median age, and higher rates of social assistance compared to municipalities.

It is questionable whether EMPLOY and ASSIST are truly independent of one another, as independent variables should be; however, let us proceed as though they were tested and found to be sufficiently independent.

For Municipalities, a regression yields:

Blinder and Oaxaca showed that, assuming that First Nations, but not Municipalities, are experiencing discrimination, we ignore interaction effects and write the difference in average MEDINC this way:

This equation tells us that the difference in median income between the two kinds of communities depends NOT ONLY on the differences in the Xs (i.e. differences in employment rates, age, social assistance levels) BUT ALSO on the fact that, even if the communities had exactly the same Xs, the betas of the municipalities differ from the betas of the First Nations and translate characteristics into a higher level of median income.

Is that because of discrimination? We can’t be sure. We have left some relevant explanatory variables out of our regression, and our omissions could result in this apparent failure to reward characteristics equally for First Nations and municipalities.

Looking at the difference in the coefficients for the two groups, we see that municipalities seem to benefit more from employment and be hurt less by social assistance rates, for no obvious reason.

Let’s compute some actual numbers. Difference between MEDINC for the two kinds of communities:

We’re about to calculate the fact that only 55% of that difference can be explained by differences in levels of employment, median age, and social assistance.

First, we calculate the difference in achievements between Municipalities and First Nations using bM (XM –XF):

Second, we calculate the difference in the way achievements are rewarded using XF (bM – bF):

So, there is a significant gap in median income between these Ontario municipalities and reserves.  55% of that gap comes from differences in characteristics (employment, median age, and social assistance rate). 45% of the income gap comes from different rewards for employment, median age, and social assistance.

We have now seen how regression analysis and Blinder-Oaxaca Decomposition can be employed to make sense of wage gaps, pointing to likely channels of discrimination. We now leave our study of discrimination and return to our chronology of the Indigenous experience in Canada.