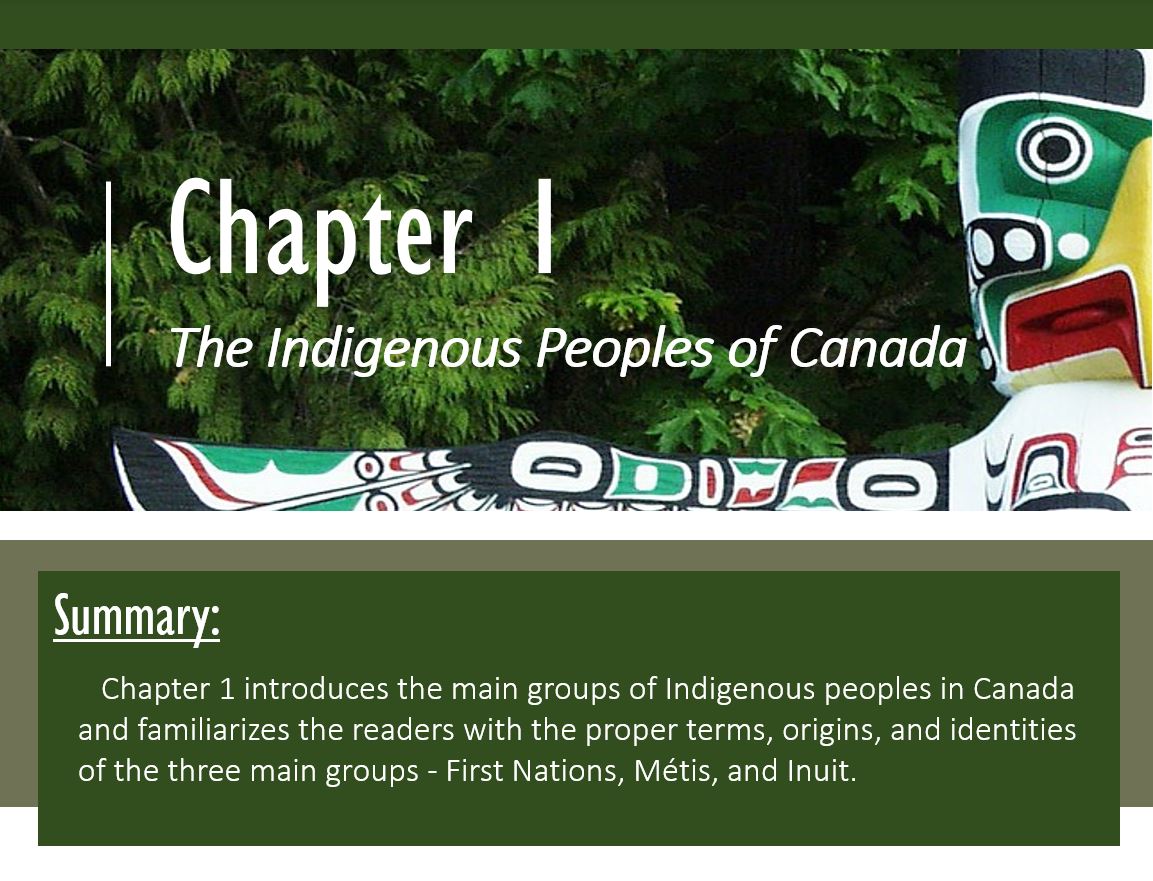 Before there was Canada, there was Turtle Island – home to the first peoples of North America. Algonquin and Iroquoian peoples tell the story of a Sky woman falling toward the sea but finding refuge on Turtle, and of how a humble creature like Muskrat dove to the bottom of the sea to find the soil needed to build her a home on Turtle’s back. Today we recognize three groups indigenous to Canada, descended from the first peoples of Turtle Island: they are the Inuit, the First Nations, and the Métis.

Inuit Territory or Inuit Nunangat is divided into four regions:  Inuvialuit in the west, Nunavut, Nunavik in northern Quebec, and Nunatsiavut in Labrador. Land claim agreements have been signed in all four regions, and Nunavut is politically independent, like other provinces and territories of Canada. In 2016 there were approximately 65,000 Inuit representing 4% of Canada’s Indigenous population. They represent their interests through an organization called Inuit Tapiriit Kanatami. Although the Inuit had contact with Europeans early on, there was virtually no European settlement on their land, and their lifestyle was not greatly changed by choice or by government until the 1950s. More information on the Inuit and their economies will be presented in Chapters 3, 15, and 29.

The First Nations comprise dozens of cultural groups and 9 language families – from east to west Algonqian, Iroquoian, Siouan, Dene, Xaad Kil (Haida), Ktunaxa (Kootenai), Salishan, Tsmishianic, and Wakashan. In 2016, First Nations individuals made up 58% of the self-identifying Indigenous people of Canada. While most First Nations people live in cities, there are over 600 recognized Bands – communities of historically-related First Nations families – which have lands allocated them known as “reserves”. It may interest you to know that the amount of land set aside as reserves is 0.2% of Canada’s land mass [1]. This does not include the larger territories negotiated in modern treaty agreements after 1975.

Many First Nations bands do not regard themselves as nations but as part of larger nations sharing a common culture.  For example, the six Kanien’kehá:ka (Mohawk) communities in Ontario and Quebec all consider themselves Kanien’kehá:ka people, their nation itself a member of the Iroquois Confederacy or “Haudenosaunee”.

The composition of communities having First Nations members can vary widely. In large Canadian cities, First Nations individuals are a minority, a minority that may be quite marginalized by the non-Indigenous population.  Social segregation is common. In rural and remote areas, community identity may be complicated too. Consider the case of Moose Factory Island, at the south of James Bay. Moose Factory Island is part of the traditional homeland of the Moose Cree, who gained title to part of the island in Treaty 9. However, the portion of the island where their hospital is located belongs to the federal government of Canada. And another section of the island, which includes the historic Hudson Bay trading post, belongs to Ontario.

The Moose Cree who live at Moose Factory do not all have “Indian Status”, a designation of the federal government. It’s possible to lose Status, usually after two or three successive generations marrying non-Status partners. We discuss Status rights in Chapter 11.

Living alongside the Moose Cree are the MoCreebec. They are Cree who moved to the island from Quebec after Treaty 9 was signed. None of them are covered by Treaty 9. Until the 1990s they were forced to squat on the Ontario portion of the Island in tents and shacks. In 2017 they joined the association of Cree communities on the Quebec side of James Bay, who are covered by the James Bay and Northern Quebec Agreement. This will provide the MoCreebec with administrative support and financial benefits. Also on the Island of Moose Factory are descendants of Moose Cree individuals who intermarried with non-Indigenous, in particular with British Hudson’s Bay Company fur traders. These people were denied Status in Treaty 9 because they lived in houses rather than the traditional mikwams. Meanwhile, across the river from Moose Cree First Nation is the Ontario town called Moosonee. Its population also is mostly Indigenous. In fact, two-thirds of Moosonee residents are Status persons. So what does a First Nations community look like? It’s impossible to generalize!

The Assembly of First Nations represents the interests of Status persons and their Bands to the broader Canadian public. The Congress of Aboriginal Peoples represents Non-Status Indians and Métis. In the recent past, the federal government did not recognize any obligation to the Non-Status Indians and Métis; however, the Supreme Court’s Daniels v. Canada decision in 2016 instructed the federal government that these two groups are also “Indians” in the sense of the Canadian Constitution.

The Métis near present-day Winnipeg were promised land when Manitoba was created in the wake of the Red River Resistance, but the parceling out of land to individuals, often land far from home, served to fragment the community. Only in 1938, and only in Alberta, was land given to Métis communities, many of whom by that time had been reduced to living on the margins of roads and railways. The total amount of land currently assigned to the Métis is comparable to the land mass of PEI.

The Métis are represented by the Métis National Council. More on Métis history and culture is presented in Chapters 8 and 9. Besides the Métis National Council, the Assembly of First Nations, the Congress of Aboriginal Peoples, and the Inuit Tapiriit Kanatami, another important national Indigenous political organization is the Native Women’s Association of Canada, representing Indigenous women.

The above Table shows us the distribution of the Canadian population with respect to Indigeneity, Status, and residence on a reserve. We see that 588,000 Canadians identified as Métis in 2016. This includes many individuals who would not be considered Métis according to the current legal definition. However, it likely falls far short of the number of Canadians who have some degree of Indigenous ancestry.

On the chart above we present the self-identified Indigenous population by province and territory.

In a 2013 TED Talk, Gabrielle Scrimshaw speaks movingly about growing up Dene, and about the untapped potential of Canada’s First Nation youth. In our next chapter we will discuss Indigenous demographics and  well-being.