The Black Aesthetic – Diversity Through Data by Jason Burke

Since Mid-March, the world has locked down communities to slow the spread of the Coronavirus delivering both an emotional and socioeconomic toll in the trillions of dollars that the Global economy has not experienced since WWII.

During this period of social distancing, George Floyd, a 46-year-old Black American man, was killed in Minneapolis, Minnesota, on May 25, 2020, during an arrest for allegedly using a counterfeit bill. For eight minutes and forty-three seconds, Derek Chauvin, a white officer, knelt on Floyd’s neck while handcuffed, lying face down and repeatedly saying, “I can’t breathe.”

Floyd’s death is not the first to trigger subsequent protests against police brutality, systemic racism, and a lack of police accountability. In 2016, NFL Quarterback Colin Kaepernick, took a knee during the playing of the American national anthem to bring awareness, engagement and Social Justice for systemic racism experienced by black people in America. As a result of his actions and position on race relations, Kaepernick has been ostracised from the NFL for four years. 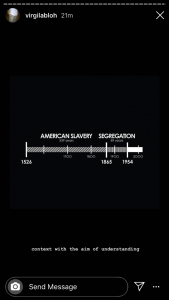 In this book, Dr King states that, “The Negro had been deeply disappointed over the slow pace of school desegregation. He knew that in 1954 the highest court in the land had handed down a decree calling for desegregation of schools “with all deliberate speed.” The negro knew, “that this edict from the Supreme Court had been heeded  with all deliberate delay. At the beginning of 1963, nine years after this historic decision, approximately 9 per cent of southern Negro students were attending integrated schools. If this pace were maintained, it would be the year 2054 before integration in southern schools would be a reality.” – Dr. Martin Luther King

Collectively, the intersection of these experiences inform us that the world has the power to shut down international borders, prioritize healthcare systems to “flatten the curve” and focus on health care and preventative measures for Baby Boomers, who represent the most vulnerable cohort of the pandemic; even at the expense of the global economy. If then the world could shut down to save lives, is it then feasible for immediate and rigorous action to be taken in order to flatten the proverbial curve when it applies to Anti-Black racism and ultimately Black lives?

Why We Can't Wait Copyright © 2020 by Jason Burke. All Rights Reserved.