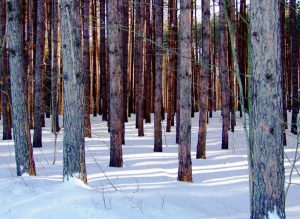 “Trees Talk” by star_cosmos_bleu is licensed under CC BY-NC 2.0

(2:16) “It was important to me as an Anishnaabe person to try to reflect some of the language to the best of my own ability. It was just about reflecting the day-to-day parlance that thrives in a lot of our communities … there is some decent knowledge still in a lot of places of Anishinaabemowin … it exists. It’s part of council meetings and family gatherings but just to have it live on the page, especially in a book, that is somewhat widely distributed, that a lot of non-Indigenous people will read, I just wanted them to know what the language looks like.”

When Things Start to Fall Apart: Andrew Wilmot in Conversation with Waubgeshig Rice

“Within just a couple of generations, culture and language are scrubbed from his community due to the brutal impacts of colonialism. Even though he didn’t endure the violence of residential schools himself, because his grandparents did, very little of his Anishinaabe identity was passed down to him. It’s the common intergenerational trauma of these terrible assimilative measures. Fortunately, he still has links to the old ways, and they become clearer and more important during this crisis. But basically, I wanted to convey that there are a lot of people like Evan, wanting to learn about being Anishinaabe but finding it hard to connect with those old ways even though they live immersed in an Indigenous community.”

Get Lit – E96 with Waubgeshig Rice

(24:43) “The Ojibwe that is in the book is sort of reflective of my own skills, like the things that I’m able to say, in my circles. My younger brother is a fluent speaker and he’s a teacher. So I consulted with him on a lot of those things. Grammar means a lot in Ojibwe, it is very technical and complicated.”

He still felt a little awkward, saying this prayer of thanks mostly in English, with only a few Ojibwe words peppered here and there. But it still made him feel good to believe that he was giving back in some way. Evan expressed thanks for the good life he was trying to lead. He apologized for not being able to pray fluently in his native language and asked for a bountiful fall hunting season for everyone. (pages 4-5)

Nicole closed the children’s book, Jidmoo Miinwaa Goongwaas, and kissed the top of Nangohns’s head. “There you go, my little star,” she said, switching from the Anishinaabemowin in the book to English. “Now you know about the squirrel and the chipmunk. You two stay put, I’ll be right back up.” (page 48)

The children were learning their language earlier and better than their parents had. Evan and Nicole has grown up in an era when Ojibwe wasn’t spoken much with the younger generation at home.  It was only two generations before Nicole and Evan that speaking Ojibwe was punished at the church-run schools that imprisoned stolen children, and the shame attached to it lingered. Evan and Nicole had vowed to make things different for their kids. They had given them Anishinaabemowin names with pride – Maiingan meant “wolf” and Nangohns “little star.”  (page 128)

Aileen was the last of the generation raised speaking Anishinaabemowin, with little English at all. She was one of only a few dozen left who could speak their language fluently. She remembered the old ways and a lot of the important ceremonies. She had more knowledge than everyone else about the traditional lives of the Anishinaabeg. (pages 146-147)

The crust of the snow he broke was thicker than his snowshoes. He kicked up frozen shrapnel each time he raised a foot. A fine powder lay underneath. The conditions made him think of the specific time of year. There’s a word for this, he thought, trying to remember with each high step across the hard snow. His knees raised as if to rev his mind into higher gear. He looked up to the lumpy clouds in the hope that the word would emerge like a ray of sunlight through overcast sky.

“Onaabenii Giizis,” he proudly proclaimed out loud. “The moon of the crusted snow.” (page 152)

The Ojibwe People’s Dictionary is a searchable, talking Ojibwe-English dictionary that features the voices of Ojibwe speakers.

Lorena Sekwan Fontaine on the question, Where do Indigenous Languages fit into Canada’s National Identity?

1. What are the connections between the language(s) that you speak and your identity?

2. How would you feel if you were told that speaking English (or French) was forbidden and that you were to now speak in another language that is unfamiliar to you?