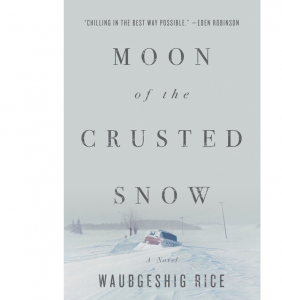 Moon of the Crusted Snow by Waubgeshig Rice is a fictional novel that looks at how an Anishinaabe First Nation, in northern Ontario, deals with an unknown event that leaves the community isolated, without power or phone service, and limited food sources as winter sets in.

In 2018, Dr. Anna Rodrigues approached author Waubgeshig Rice with the idea of collaborating on an open educational guide for his novel, Moon of the Crusted Snow, when she discovered that OERs for books written by Indigenous authors were lacking. That collaboration resulted in an online educational guide launching in 2019 that was well received by educators across Canada. In early 2021, Waubgeshig and Anna decided to update the guide and, at that time, Dr. Kaitlyn Watson, from the Teaching and Learning Centre at Ontario Tech University, joined the project. As part of this update, themes from the original resource have been expanded and a new theme which explores connections between the novel and the global pandemic have been added.

In December 2018, Waubgeshig Rice sat down with

Shelagh Rogers from The Next Chapter to discuss his recently published book, Moon on the Crusted Snow.

The Next Chapter is a Canadian Broadcast Corporation radio program focused on Canadian writers and songwriters. 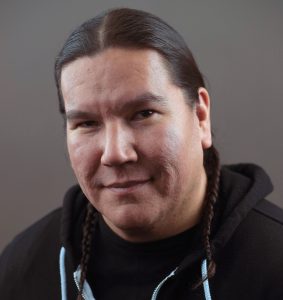 Waubgeshig Rice is an author and journalist from Wasauksing First Nation on Georgian Bay. His first short story collection, Midnight Sweatlodge, was inspired by his experiences growing up in an Anishinaabe community and won an Independent Publishers Book Award in 2012. His debut novel, Legacy, followed in 2014, with a French translation published in 2017. His latest novel,

Moon of the Crusted Snow, became a national bestseller and received widespread critical acclaim, including the Evergreen Award in 2019. His short stories and essays have been published in numerous anthologies.

His journalism experience began in 1996 as an exchange student in northern Germany, writing articles about being an Indigenous youth in a foreign country for newspapers back in Canada. He graduated from Ryerson University’s journalism program in 2002. He spent most of his journalism career with the Canadian Broadcasting Corporation as a video journalist, web writer, producer and radio host. In 2014, he received the Anishinabek Nation’s Debwewin Citation for excellence in First Nation Storytelling. His final role with CBC was host of Up North, the afternoon radio program for northern Ontario. He left daily journalism in 2020 to focus on his literary career.

He currently lives in Sudbury, Ontario with his wife and two sons, where he’s working on the sequel to Moon of the Crusted Snow. To learn more about Waubgeshig Rice, please visit his