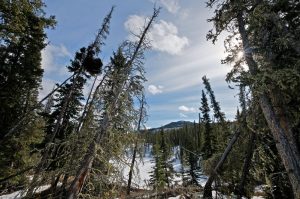 In the novel, Moon of the Crusted Snow, a First Nation community in northern Ontario deals with the sudden disappearance of communications and then power, severing their ties to the South. As winter approaches, many in the community realize they aren’t as prepared as they should be due to their reliance on technology and modern conveniences. As people struggle through the winter months, it becomes clear that the key to survival may be found in reconnecting, as a community, with the land.

In the coming weeks, the temperature would drop and the snow would come. Soon after, the lake would freeze over and the snow and ice would be with them for six months. Like people in many other northern reserves, they would be isolated by the long, unforgiving season, confined to a small radius around the village that extended only as far as a snowmobile’s half tank of gas. (page 11)

Despite the hardship and tragedy that made up a significant part of this First Nation’s legacy, the Anishnaabe spirit of community generally prevailed. There was no panic on the night of this first blizzard, although there had been confusion in the days leading up to it. Survival had always been an integral part of their culture. It was their history. The skills they needed to persevere in this northern terrain, far from their original homeland farther south, were proud knowledge held close through the decades of imposed adversity.  They were handed down to those in the next generation willing to learn. Each winter marked another milestone. (page 48)

2. How do you feel connected to the land around you? How does the environment sustain you (mentally, physically, emotionally, spiritually)?

3. In your current context, how is your daily life shaped by the land and/or your environment, in big ways and small?