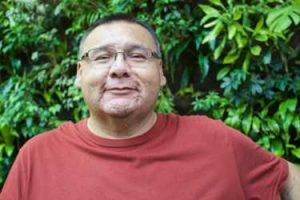 Growing up, I was told many stories by my Grandparents. These stories were about the world around us: creation stories, trickster stories, and folklore stories. I heard stories about how our people would be haunted by Sabe if we did not act with respect and integrity.

Stories have always been a part of our lives. Stories are how we learn about our ancestors and how we come to understand and appreciate the lives they have lived. Grandpa Harry always told stories as he carved a piece of wood into an ax handle or paddle, giving that piece of the woodwork a sense of life and identity. Our Grandmothers were the same, telling stories as they quilted patterns and made crafts imbued with meaning for the local trading post.

Looking back, I now know and understand the value of storytelling. I worry though that it has lost value in our traditional teachings. Our way of knowing is in our stories; they are how we teach our culture. Stories connect us to each other and our spiritual understanding of our communities.

I worry, I worry those days of sitting, listening to Grandpa talk about the hunting and harvest seasons while smoking on an old pipe have passed. In light of this, there is a story I would like to share with you:

One day a young man was walking a path he had taken many times before, only this time he was walking a bit slower and with hesitation. Just beyond the treeline, he could see the clearing, indicating he was close to his destination. As he moved closer towards the opening in the trees, fear overcame him. He stopped and pondered his next move. His breath echoing through the trees, it was like the wind answered him, brushing up against him pushing him forward. He trudged onward; the smell of smoke choked his lungs. Sounds of muffled voices carried through the air, conversation and laughter.

He peered towards the clearing and listened carefully to the voices coming from the north. Dusk was setting in as he stumbled quietly closer to the clearing. He found a rotten log just beyond the brightness of an open fire and sat down still hidden in the shadows. In that light, seated around the fire, he saw a circle of his Anishinaabe teachers.

He sat there listening to the conversation, sheepishly hoping not to disturb the teachers. He prayed they would not acknowledge him. It had been several moons since he had stood in the circle or participated in the teachings and ceremonies.

An old man turned to him and gestured him to move closer to the circle. With embarrassment and hesitation, he did.

The old man turned and asked him, “Did you hear about the young lost hunter’s boy?”

“We had been wondering how we could help search for him. But maybe you could help out in this quest?” the old man said with a look of deep concern on his face.

He replied, “What should I do?”

“Well, that lost boy has everyone looking for him right now.” The old man drank from his tea and glanced over his copper cup. “Interesting you should show up today, we were wondering about you. We have not seen you for some time. Great to have you join us again.” Then he said again, “We need your help.”

He began to give instructions.

“At first light, you need to go to the meadow where that tall oak tree stands. At the tree, look up, way up, and you will see a bee taking its final flight of the season before it hibernates. Watch the bee as it flies and dodges the leaves that fall from the tall oak tree. It is going to fly over the stream that flows next to the tree. It will follow the stream down through the forest to the larger body of water. The bee will fly towards the lake and fly off into the horizon. The answer is right there, just be careful where you step.”

At the early light, the young man made his way to the meadow. As he reached the edge of the field, there stood the tall oak tree the old man had mentioned. As he approached, he looked upwards. There he saw a bee flying as if to dodge the leaves, who made its way just as the old man said: down to the water and off into the horizon, then out of sight. The young man stood there looking at the water but could not see any answer about the missing boy. He studied and retraced his steps in his mind. Still no answer. He played and replayed the instructions of the old man, and retraced his steps again. After 27 attempts, frustrated beyond control, he began to curse and discount the old man and his old ways. He stood in the twilight looking at the horizon and mumbled to himself, “Tall oak, I’ve found the bee, the leaves, the path, the horizon, all the items, so I must be missing something.”

As he pondered, he looked down and there he saw a clear image of himself. At that moment the moral and purpose of the quest came to him. Stand tall and believe in yourself.

Our stories have a specific purpose. They are meant to strengthen future generations and to build our nations. The teachings kept our legacy attached to our sovereignty, and today they rekindle the missing piece of our identity. This book represents an opportunity to tell our story to those who do not know the truth. Be kind to the words of my people.