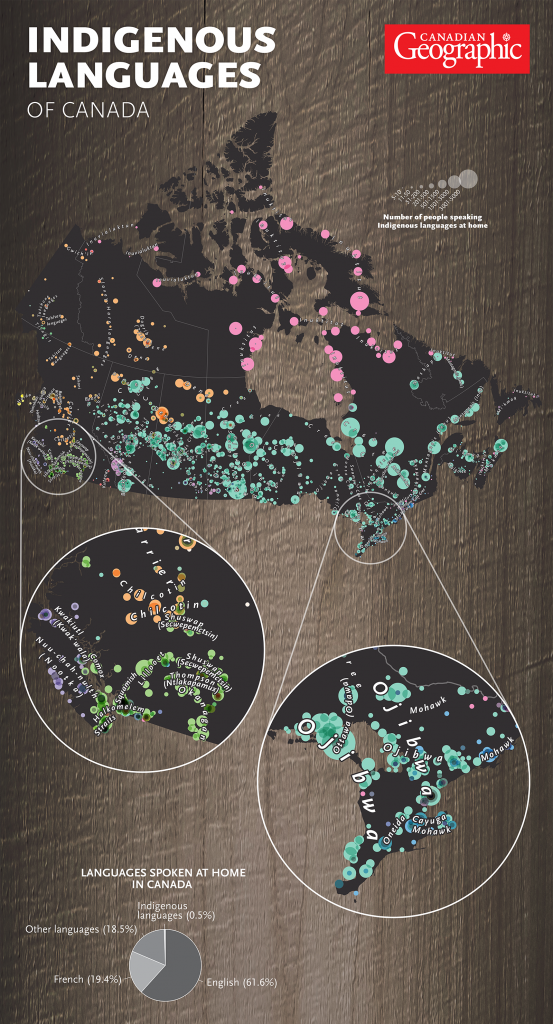 Indigenous, Métis, and Inuit languages are often described as “dying” or disappearing, and media headlines tend to focus on how the government or individuals are trying to preserve endangered Indigenous languages. What this narrative overshadows, and indeed attempts to extinguish, is that the story of Indigenous languages is one of resiliency, resistance, and power.

Indigenous languages have been actively suppressed by the Government of Canada throughout colonization, most predominantly through education (in particular, the residential school system) and government policies like the Indian Act. In its final report, the Truth and Reconciliation Commission (TRC) described how the use of Indigenous languages was restricted in the residential school system and provided a number of individuals’ stories and “memories of being punished for ‘speaking Indian’” (2015, Executive Summary, p. 81). The TRC identifies the broad and deep ways that Indigenous life and culture have been obliterated and erased from Canadian history as a cultural genocide. Many people refer to what happened to Indigenous languages as a linguicide – the intentional suppression of a language in order to destroy a culture (Harp, 2017). This effort to suppress the use of Indigenous languages continues today. “Put simply,” writes Rick Harp (2017), “…our languages literally remind non-Indigenous settlers that we are different, in a way that instantly and unmistakably communicates that we were here first” (original emphasis, para. 7).

John Steckley discusses how he became a scholar of the Huron/Wendat language.

The TRC Calls to Action

The TRC report also includes many stories of Indigenous languages being spoken in secret, demonstrating the resiliency and resistance Indigenous Peoples embodied in order to protect their languages and cultures. Despite their efforts, language loss has been significant and continues to be a critical factor in reconciliation efforts today: “even after [residential schools] were shut down, loss of language knowledge and the fear of speaking Indigenous languages lingered, and therefore inhibited the passing of these languages from one generation to the next” (“Indigenous Languages in Canada,” 2016). The fact that so many Indigenous languages are still spoken across Canada today, after the residential school system and the efforts to enforce English and French, attests to a form of resistance that often goes unrecognized in mainstream understandings of Indigenous history.

In its report, the TRC (2015) emphasized the important connection between culture and language: “language is necessary to define and maintain a world view. For this reason, some First Nation elders to this day will say that knowing or learning the native language is basic to any deep understanding of a First Nation way of life, to being a First Nation person” (Executive Summary, p. 152). In its calls to action, the TRC (2015) called on the “federal government to acknowledge that Aboriginal rights include Aboriginal language rights” (Executive Summary, p. 155).

In 2016 Prime Minister Justin Trudeau announced the introduction of the Indigenous Languages Act to help preserve First Nations, Métis, and Inuit languages. This Act created the Aboriginal Languages Initiative (ALI), the only currently existing government program focused on language protection and revitalization. Unfortunately, the ALI has faced criticism from many, including the federal government’s own department of Indigenous and Northern Affairs Canada for being poorly funded and sustained. The prime minister’s announcement was seen as a significant step, but as many critics have pointed out, it comes on the heels of other government-initiated languages programs that have failed as a result of a lack of funding, resources, and consultation (TRC, 2015, Executive Summary, p. 156).

The TRC (2015) has also called upon post-secondary institutions to “create university and college degree and diploma programs in Aboriginal languages” (Executive Summary, p. 157). This call to action recognizes that colleges and universities can play a pivotal role in supporting Indigenous languages and in reconciliation more broadly. To take up that role, they will need to consult with First Nations, Métis, and Inuit communities on how best to promote and celebrate Indigenous languages and self-governance.

Khelsilem shares the reasons we need thriving Indigenous languages and how we can make that happen.

Indigenous languages in Canada. (2016). In The Canadian Encyclopedia. Retrieved from http://www.thecanadianencyclopedia.ca/en/article/aboriginal-people-languages/