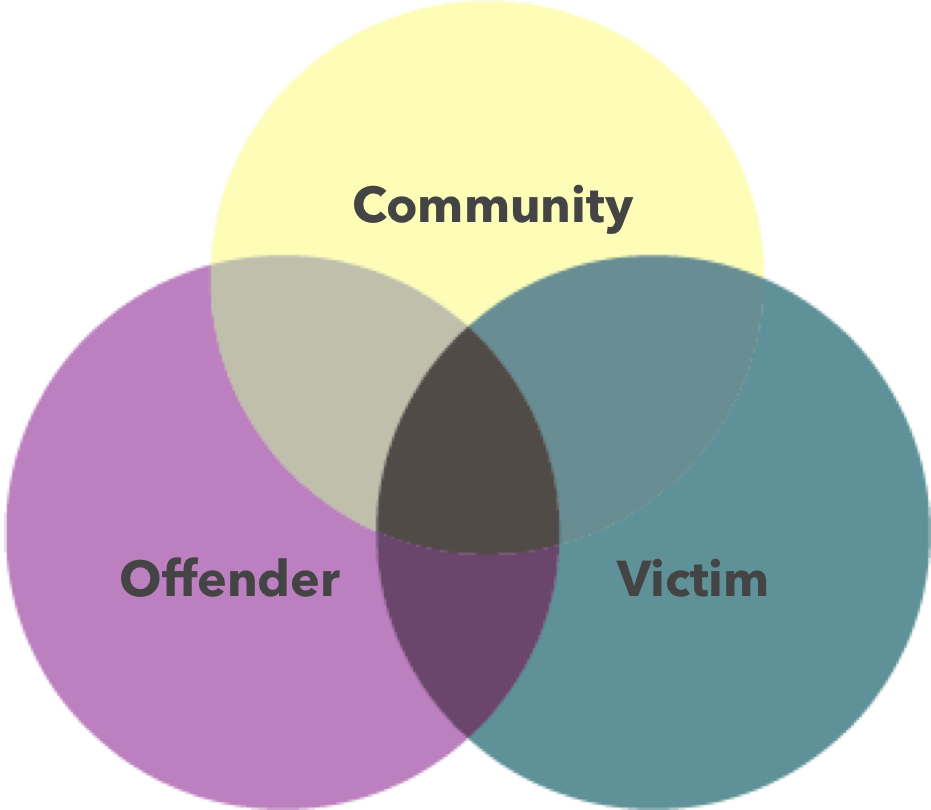 First Peoples experience incarceration at an alarming rate due to systemic discrimination in Canada’s judicial system. In a series of public inquiries and Royal Commissions during the 1990s, restorative justice was tabled as an alternative system to address the ways in which the criminal justice system was failing Indigenous Peoples (Alberta Government, 1991; Aboriginal Justice Implementation Commission [AJIC], 1999; Law Reform Commission of Canada, 1991; Royal Commission on Aboriginal Peoples, 1996).

Accepting and establishing restorative justice practice is not something the Canadian government has moved towards lightly or swiftly. Fully embracing restorative ideologies requires sweeping and complex change. Indigenous communities believe this shift begins with addressing the historical and contemporary damage inflicted on their communities through a culturally inappropriate legal system. Once the historical and contemporary damage is acknowledged, restorative justice can be encouraged as an alternative methodology for understanding acts of crime and restitution among Indigenous community members (Gall, 2006; Royal Commission on Aboriginal Peoples, 1996). See sidebar 1 for an example of how restorative justice is employed.

Restorative justice finds its roots among the First Peoples of Canada, the Indigenous Peoples of the United States, and the Maori of New Zealand (Correctional Service Canada [CSC], 2015b; Dickson-Gilmore & La Prairie, 2007; Simon Fraser University, n.d.). It is a traditional practice of addressing crime in a way that situates it as an act against an individual and community, not an act against a state and its laws (Dickson-Gilmore & La Prairie, 2007; Gall, 2006; Zehr, 1990). Restorative justice practice acknowledges that crime does damage, but posits that judicial systems should be a vehicle for healing, not for punishment. This method of justice attempts to understand the circumstances that led to crime occurring in the first place in order to accurately identify and address the cause and impacts. The goal then becomes identifying a healing methodology for both victim and offender that helps reduce recidivism and acknowledges the impact of the crime on the individuals and communities affected (Centre for Justice & Reconciliation, 2017; CSC, 2012).

Utilizing restorative justice practice is voluntary, but if employed, the ultimate goal is for both parties to come to a consensus on reparations for the impact of the crime and to then move forward in a way that allows for healing (CSC, 2012). Under this framework, both the offender and the victim are encouraged, where appropriate, to enter into dialogue with one another to explore the extent and impact of the crime and seek ways to repair the damage done. Thus, the practice is intended to be holistic in its approach. For Indigenous communities, restorative justice is a return to their original system of justice before colonization, which ensured social stability while protecting and reinforcing values, integrity, and healing for the entire group (Zehr, 1990). In Canada today, restorative practice is typically applied through three voluntary methods: victim-offender mediation, restorative conferencing, and circle processes, also known as circle sentencing (CSC, 2012, para. 5).

For example, if a healing circle is used as the method for justice, it must include the offender, elders, community members, and the victim if he or she has agreed to participate. The circle is typically mediated by a willing judge. In the circle all parties discuss the crime and how it has affected the victim and their community. In addition the circle focuses on the underlying causes of the offence. Together the group will suggest reconciliatory action for the offender. The process is often more lengthy and challenging for offenders as they have to face and address the victim and the trauma they have caused. Victims report feeling more satisfaction than when using traditional justice procedures (Justice Education Society, 2016). Thus, restorative justice practice becomes an effort to institutionalize a positive problem-solving methodology around a system that has historically been culturally devastating for both victim and offender (Justice Education Society, 2016).

During the 1990s a series of public inquiries and Royal Commissions placed pressure on the government to take notice that the justice system in Canada was failing Indigenous communities. This pressure set the stage for a couple important court cases that ensured that, today, judges and prosecutors are expected to consider individual history, and social and economic circumstance when encountering an Indigenous person in the justice system.

In 1999 the Supreme Court of Canada set an important precedent in the case of R. v. Gladue (see sidebar 2), with a decision that required judges in lower levels of court to consider an Indigenous offender’s background and circumstances when making sentencing decisions, according to section 718.2 (e) of the Criminal Code (April & Orsi, 2013; Native Women’s Association of Canada [NWAC], n.d.; Parrott, 2017).

The Supreme Court confirmed and expanded on this ruling in 2012 in the case of R. v. Ipeelee. The Court heard from two Indigenous offenders who had breached supervision orders. The Court opted to take into account the deficiency of the justice system to consider the background and unique circumstances of the convicted. See sidebar 3.

The R. v. Gladue and R. v. Ipeelee cases paved the way for the establishment of a clearer understanding of Gladue rights, Gladue courts, and Gladue reports. Today Gladue reports are a standard component of judicial consideration for cases involving Indigenous Peoples in Alberta, Manitoba, Ontario, British Columbia, and Nova Scotia. However, the application of Gladue principles is still at the discretion of the judge. If judges do not feel the Gladue report has any bearing on a particular case, they do not need to accept the report or the request to access Gladue court (Aboriginal Legal Services, 2016; NWAC, n.d.; Parrott, 2017).

“In 1995, Jamie Tanis Gladue, a 19-year-old Indigenous Cree woman, killed her common-law husband, Reuben Beaver, in British Columbia” (Parrott, 2017, para. 2). Gladue was not living on a reserve at the time of the murder, and for that reason, the judge ruled that section 718.2 (e) of the Criminal Code could not apply to her case (Parrott, 2017). She was then sentenced to three years in prison. Gladue appealed this decision to the British Columbia Court of Appeal. The court upheld her sentence but agreed to review and clarify the intent of section 718.2 (e) of the Criminal Code. Upon review, the Supreme Court announced the ruling that “judges may not, as in Gladue’s case, excuse an Indigenous offender from consideration based on residence. A judge must consider an Indigenous community in a broad sense, including urban or more widely spread communities and networks of support” (Parrott, 2017, para. 10).

It would be naive to suggest that sentencing Indigenous Peoples differently without addressing the primary causes of criminality would eliminate their over-representation in the criminal justice system entirely (R. v. Ipeelee, 2012, Section 61). Corrections Services Canada has acknowledged this challenge. In 1994 it opened its first healing lodge to service minimum–medium risk offenders (CSC, 2016). CSC (2015a; 2016) describes these facilities as institutions that use Indigenous spirituality, values, beliefs, and traditions in inmate programming that is guided by traditional teachers and Indigenous communities, in a methodology that is designed to facilitate healing. These facilities operate in one of two ways: some are fully funded and run by the CSC, and others incorporate support from both the CSC and an Indigenous partner community. The goal of both of these types of facilities is to work towards the healing and rehabilitation of inmates using traditional Indigenous practices and healing methodologies that support and work in collaboration with the goals of restorative justice practice. As of 2011 CSC is funding nine facilities operating across Alberta, Manitoba, British Colombia, Saskatchewan, and Quebec.

Click the above link to open an interactive map to learn more about the CSC healing lodges across Canada.

“The sentencing judge has a statutory duty, imposed by s. 718.2(e) of the Criminal Code, to consider the unique circumstances of Aboriginal offenders. Failure to apply Gladue in any case involving an Aboriginal offender runs afoul of this statutory obligation. As these reasons have explained, such a failure would also result in a sentence that was not fit and was not consistent with the fundamental principle of proportionality” (R. v. Ipeelee, 2012, sect. 87).

“Therefore, application of the Gladue principles is required in every case involving an Aboriginal offender, including breach of LTSO, and a failure to do so constitute an error justifying appellate intervention” (R. v. Ipeelee, 2012, sect. 87).

Alberta Government. (1991). Justice on trial: Report of the Task Force on the Criminal Justice System and Its Impact on the Indian and Metis People of Alberta. Edmonton, AB: Aboriginal Affairs and Northern Development, 2002-2006. Retrieved from https://open.alberta.ca/publications/1369434#summary

Centre for Justice & Reconciliation. (2017). What is restorative justice? Retrieved from http://restorativejustice.org/#sthash.PxJ2ZqGJ.XDMseWlm.dpbs

Correctional Services Canada. (2015a). An examination of healing lodges for federal offenders in Canada (pp. i-109). Ottawa, ON: Government of Canada. Retrieved from http://www.csc-scc.gc.ca/research/r130-eng.shtml

Correctional Services Canada. (2015b). FORUM on corrections research. Ottawa, ON: Government of Canada. Retrieved from http://www.csc-scc.gc.ca/research/forum/e121/e121j-eng.shtml

Law Reform Commission of Canada. (1991). Report on Aboriginal Peoples and criminal justice: Equality, respect and the search for justice as requested by the Minister of Justice under Subsection 12(2) of the ‘Law Reform Commission Act’ [Report]. Ottawa, ON: The Commission. Retrieved from https://archive.org/details/reportonaborigin00lawr