A band council is an elected group, led by an elected chief, that administers federally funded programs on First Nations reserves. The size of the band council depends on the size of the community; the ratio is roughly one council member to 100 band members. Council members are elected by community members every four years. Sometimes band councils join together to administer and deliver programs and services – these groupings are called tribal councils. Joint projects might include shared emergency services, education and schooling councils, or health-care delivery. Nishnawbe Aski Nation is an example of a large tribal council that represents 49 First Nations in Northern Ontario, with about 45,000 band members (Nishnawbe Aski Nation, n.d.).

The Limitations of the Chief and Council System 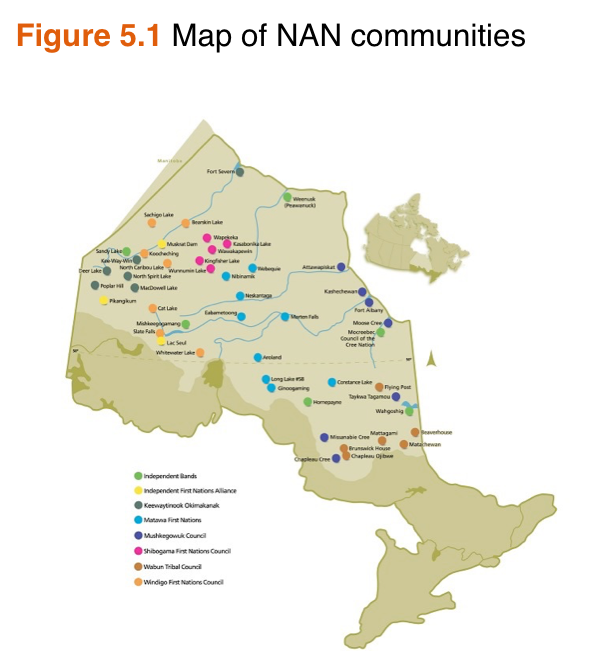 Although the terms “chief” and “band council” sound like Indigenous terms, they are not, nor are they representative of, or part of, any traditional form of Indigenous governance. Rather, they are part of a system of governance imposed under the 1876 Indian Act that is funded by, and answers to, the federal government.

The word “chief” became widely used after its introduction in two 1869 policy documents that were precursors to the Indian Act (Indigenous Nations had other terms with specific meanings for their leaders). These documents gave chiefs very limited powers, mostly responsibilities for infrastructure (roads, buildings) on reserves and for ensuring their community members behaved according to new colonial codes of conduct.

Some Indigenous Nations resisted the imposition of the Indian Act Chief and Council system: for example, the Haudenosaunee of Six Nations (Brantford, ON) kept their traditional governance structure until 1924 when the government overthrew it; since then, many community members have refused to participate in Indian Act elections.

Most Indigenous forms of community government, including the potlatch system found among West Coast Nations and the hereditary chief system (practiced by many Indigenous communities across Turtle Island), were disbanded under colonial rule, but some communities continued to recognize traditional leaders such as clan leaders or hereditary chiefs (and in some cases, elect these traditional leaders to serve as Indian Act chiefs). In these communities, traditional leaders are key to the cultural survival of the community and play crucial roles in the well-being of their Peoples. To this day, however, Canada only legally recognizes Indian Act chiefs.

The vast majority of First Nations chiefs are highly respected within their communities and have a sincere desire to improve the well-being of their community members. However, their role remains subjugated within the colonial system of Canada. Community leaders elected to serve as chiefs and council members have very little to no power to change the system itself, as the relationship between First Nations and the federal government is unequal (not nation-to-nation). Ultimately, the overarching laws and powers rest with the federal government, and it’s the job of the chief and the council to administer the federally funded programs and initiatives in their First Nations communities.

The Chief and Council system is often compared to a municipal city council, where individuals are elected by the community and there are no specific political party affiliations. (Political party affiliations are only used in provincial and federal elections.) However, this comparison only works to a point. The Chief and Council system administers services far beyond what a typical city hall would need to manage, including federally funded portfolios like health care, child-care services, schooling and education, housing, infrastructure like roads and water, and all the other programs, facilities, and initiatives that take place in the community.

Many First Nations face extraordinary challenges in their communities, and they self-administer services that are clearly designated as provincial areas of responsibility (e.g., health care and education). This means the work is tedious, wide-ranging, and very challenging. For example, while across Canada, local (non-Indigenous) school boards are used to administer education, many First Nations have no schools boards due to limited funding to create and sustain them, nor do they have a provincial government structure to rely on for resources like curriculum.

As detailed in other parts of this etextbook, on-reserve education (funded by the federal government but administered through the Chief and Council system) is funded at a far lower level than off-reserve schools. This means that chiefs and councils have a far greater breadth of responsibilities to attend to, and they must do so with less funding in communities with greater needs than non-Indigenous communities.

The Myth of the Corrupt Chief

Many Canadians have little contact with Indigenous communities, much less with chiefs or band council members. There is a pervasive myth that chiefs are corrupt and steal money, or otherwise profit, while their communities suffer. This is a stereotype based on a few stories that are widely circulated in corporate/mainstream non-Indigenous media. As Métis lawyer and blogger âpihtawikosisân (a.k.a Chelsea Vowel) says in a blog post on this matter (2016), this myth is fueled by the lack of understanding most Canadians have about how reserves are funded, and what the roles and responsibilities of chief and council are. Further, Vowel reminds us it is a system created by, and insisted upon, by the Government of Canada.

âpihtawikosisân. (2016, February 15). The myth of the corrupt chief and band council (Part I). Retrieved from http://apihtawikosisan.com/2016/02/the-myth-of-the-corrupt-chief-and-band-council-part-i/