There are two other truths that are part of this discussion. One truth is that the natural resources on traditional lands could mean very positive changes to First Nations communities. Many Indigenous leaders agree that their communities’ struggles with employment, health care, safe drinking water, housing, and mental health could benefit from an improvement in their economic circumstances. Many leaders are anxious, if not desperate, to make this happen. Nonetheless, these same leaders are painfully aware that the sacred bond between their peoples and their traditional lands has been broken many times over by governments, mining and forestry companies, and other for-profit organizations that have sought to exploit the natural resources on those traditional lands.

These two truths, then, are opportunity and risk: the opportunity for economic benefits weighed against the risk of damage and destruction to lands, food and water sources, and the very ecosystems that Indigenous Peoples feel part of.

Key Players in Disputes over Traditional Lands and Natural Resources

The Indigenous Peoples who are the traditional land users are central to any negotiation about land use.

Federal, provincial, and territorial governments may all have a role to play in negotiations and consultation.

While some argue that the Canadian federal government has been reasonably progressive in recognizing Indigenous land and resource rights, such recognition has often come only after lengthy court battles and relentless pressure by Indigenous communities (Anderson, Schneider, & Kayseas, 2008). Unfortunately, when governments must be forced by the courts to honour Indigenous land rights, one cannot expect these same governments to intervene fairly when private sector organizations wish to profit from resources on traditional lands.

When natural resources such as lumber, minerals, or fossil fuels become a focus for industry, companies that stand to gain economically from the development of such resources are key participants in negotiations.

In November 2014, First Peoples Worldwide released its report on the tension between “extractive industries” and Indigenous land rights. The Indigenous Rights Risk Report studied 52 oil, gas, and mining companies undertaking 330 projects worldwide. The study found that 92 percent of the companies (48 out of 52) “do not address community relations or human rights at the board level in any formal capacity” (Adamson, 2014).

This documentary features a nurse practitioner who works with community members who face challenges in becoming effective negotiators and decisions makers in the Ring of Fire.

The Ring of Fire

Students are encouraged to explore examples of how Indigenous Peoples have advocated – with a wide range of outcomes – for full consultation, economic benefit–sharing, and protection of traditional lands through the summaries in the sidebars.

One story, the Ring of Fire, is examined here in more detail. The outcome is not yet known as events are ongoing at the time of writing.

The Ring of Fire is the common reference for a section of Northern Ontario, roughly 240 kilometres west of Attawapiskat, covering almost 10,000 square kilometres and containing some 5300 mining claims as of mid-2016. Over 24,000 Indigenous Peoples call these their traditional lands. These communities “depend on wild fish and animals for food and have inherent [treaty] rights to the land. This wilderness of trees, wetlands, lakes and rivers is part of the planet’s largest intact forest. It supports hundreds of plant, mammal and fish species, most in decline elsewhere, and is the continent’s main nesting area for nearly 200 migratory birds” (Wildlands League, n.d.).

The Matawa Tribal Council has been involved in high-stakes negotiations regarding the development of this region since approximately 2010. These “First Nations are under pressure from mining companies and the province to consent to complex agreements to move the project forward” (Freeman, 2013b).

Three of these First Nations – Webequie, Marten Falls, and Neskantaga (also known as Lansdowne House) – have overlapping claims to land they each consider their traditional territory. Knowledge keepers tell tales of how the area has been an ancient meeting ground for members of neighbouring bands. For the first time in generational memory, there is a need to define borders around “traditional territory that was once seen as shared land” (Freeman, 2013b).

Indigenous representatives are well aware of the disastrous history of for-profit organizations attempting to strike it rich by exploiting natural resources on traditional lands. The damage to lands, food sources, community health, and communities in general has been extreme. (See sidebars.) 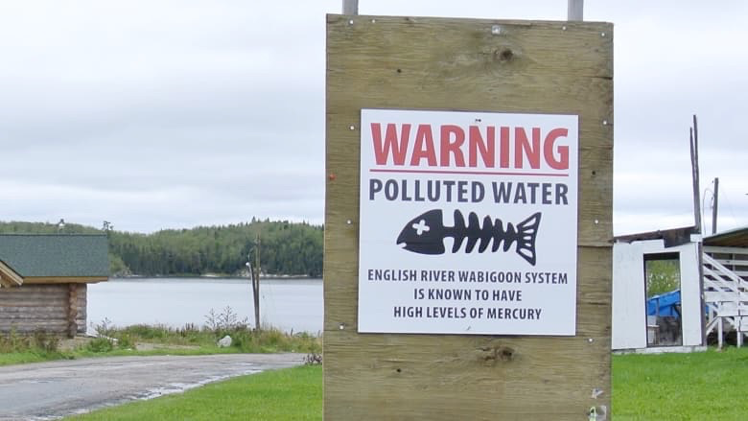 From 1962 to 1970 the Dryden pulp and paper mill dumped 10 tons of mercury into the Wabigoon-English River system, poisoning the ecosystem and the residents of Grassy Narrows. The river and lake systems were contaminated for at least 250 km downstream (Bruser, 2016).

[Mercury] does not break down in the environment and can build up in living things, […] “inflicting increasing levels of harm on higher order species,” according to Environment and Climate Change Canada. Bacteria […] turn mercury into its most toxic form, methylmercury. The methylmercury migrates up the food chain to fish and then to the locals who eat the fish. Absorbed through the digestive tract, methylmercury “readily enters the brain” where it can remain for a long time, according to Health Canada. In a pregnant woman, it can build in the fetal brain and other tissues. (Bruser, 2016)

In the 1960s residents started to notice dead fish floating to the surface. Turkey vultures began to fly as if they were drunk. Fish-eating mammals, such as the otter and mink, disappeared. The locals were told to stop eating the fish (Bruser, 2016). The robust fishing tourism industry, especially at famous Ball Lake Lodge, was decimated. Commercial fishermen and guides went on welfare (Bruser, 2016). “You can’t see the mercury, but we know it’s in there,” said Judy Da Silva in an interview in 2016. “Being a land-based people and a river people historically, it has been devastating through time” (Draaisma, 2016). Her whole life, DaSilva has been dealing with the fallout of the mercury contamination. “I have mercury poisoning. It affects me physically. I was in my mother’s womb when the poison was being poured into the river.” The poisoning has robbed the community of its way of life, she said. People have to live on welfare to survive (Draaisma, 2016).

Located in Northern Saskatchewan, the Lac La Ronge Indian Band (LLRIB) is the largest First Nation in Saskatchewan and one of the 10 largest in Canada. In 1981 the LLRIB formed the Kitsaki Development Corporation, which later evolved into the Kitsaki Management Limited Partnership (KMLP), to manage for-profit economic development on traditional lands. The KMLP’s approach to improving the socio-economic circumstances of the people of the LLRIB has been to form “sound, secure partnerships with other Aboriginal groups and successful world-class businesses in order to generate revenue for Kitsaki and employment for Band members” (McKay, 2002, p. 3). Employment rates and overall quality of life for band members has increased substantially while traditional lands have been protected.

In the late 1950s and early 1960s the Alberta government assured impoverished First Nations’ band councils that the development of their treaty reserve lands, which  included the tar sands, would create economic development and jobs for their communities. This assurance led to the first experiments with tar sands operations in the 1960s and 1970s on lands inhabited mostly by Dene, Cree, and Métis. Exxon, Shell, Syncrude Canada, BP/Husky, CNRL, and Suncor Energy used explicit public relations campaigns targeting First Nations communities to advocate for how tar sand expansion would be good for Indigenous Peoples (“What Are the Tar Sands,” n.d.).

In 2015-2016 a review of the Lower Athabasca Regional Plan (LARP) revealed that the Alberta government failed to protect Indigenous rights, lands, and health from industrial development in the tar sands region (Weber, 2016). “What Alberta said it would do and what it actually did are very different things,” says the review panel report. The inquiry report agreed with the Athabasca Chipewyan, the Mikisew Cree, the Onion Lake Cree, the Chipewyan Prairie Dene, and the Cold Lake First Nations that business was given priority over Indigenous constitutional rights (Weber, 2016).

On their webpage “What Are the Tar Sands,” the Indigenous Environmental Network notes the following:

Curry, B. (2016, August 26). Road to Ring of Fire could cost up to $550 million. The Globe and Mail. Retrieved from https://beta.theglobeandmail.com/news/politics/road-to-ring-of-fire-could-cost-up-to-550-million/article31585443/?ref=http://www.theglobeandmail.com&

Jones, A. (2017, August 21). Ontario to move ahead with road access into chromite-rich Ring of Fire region. The Canadian Press. Retrieved from http://www.680news.com/2017/08/21/ontario-to-move-ahead-with-road-access-into-chromite-rich-ring-of-fire-region/

Matawa First Nations Gathering. (2013). The power of unity and the dignity of difference. Retrieved from https://www.youtube.com/watch?v=nPbl0IpULHk&t=24s

Office of the Premier of Ontario. (2015). First Nations, Ontario sign political accord. Retrieved from https://news.ontario.ca/opo/en/2015/08/first-nations-ontario-sign-political-accord.html

“What are the tar sands.” (n.d.). Indigenous Environmental Network (IEN). Retrieved from http://www.ienearth.org/what-are-the-tar-sands/

Windigo, D. (2013, October 11). ‘It’s bad for the environment, if we are not careful, it’s bad for First Nations’. APTN National News. Retrieved from http://aptnnews.ca/2013/10/11/its-bad-for-the-environment-if-we-are-not-careful-its-bad-for-first-nations/