Most humans form self-identities through their communication with others, and much of that interaction occurs in a group context. A group may be defined as three or more individuals who affiliate, interact, or cooperate in a familial, social, or work context. Group communication may be defined as the exchange of information with those who are alike culturally, linguistically, and/or geographically. Group members may be known by their symbols, such as patches and insignia on a military uniform. They may be known by their use of specialized language or jargon. Group members may also be known by their proximity, as in gated communities. Regardless of how the group defines itself, and regardless of the extent to which its borders are porous or permeable, a group recognizes itself as a group. Humans naturally make groups a part of their context or environment. 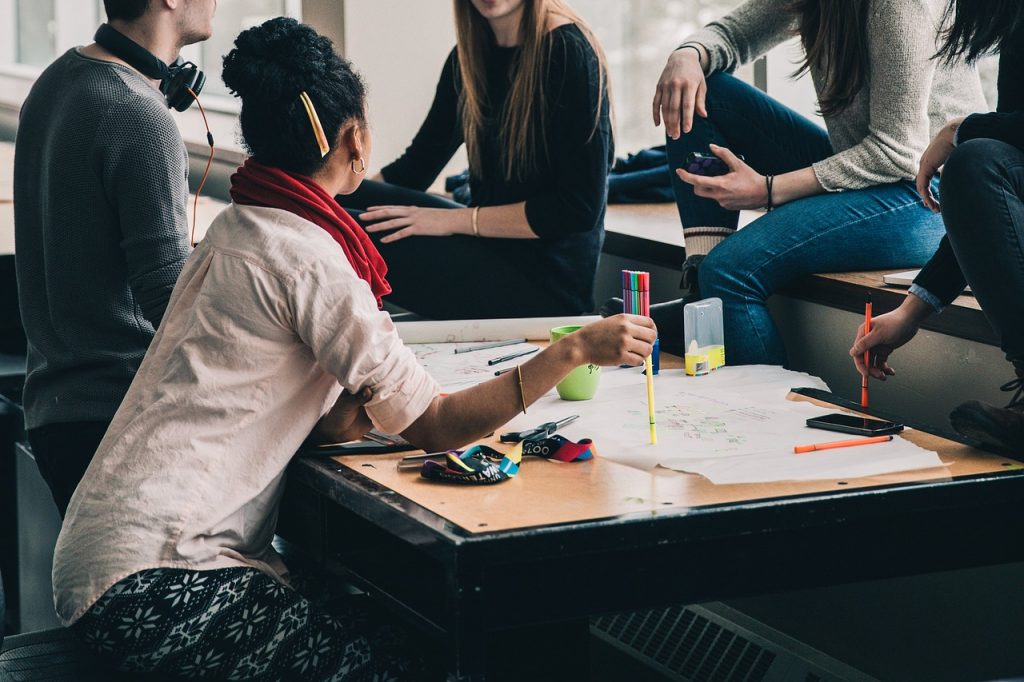 Types of Groups in the Workplace

As a skilled business communicator, learning more about groups, group dynamics, management, and leadership will serve you well. Mergers, forced sales, downsizing, and entering new markets all call upon individuals within a business or organization to become members of groups. Groups may be defined by function. They can also be defined, from a developmental viewpoint, by relationships within the group. Groups can be discussed in terms of their relationship to the individual and the degree to which they meet interpersonal needs. Some groups may be assembled at work to solve problems, and once the challenge has been resolved, they may dissolve into previous or yet to be determined groups. These temporary problem-solving groups are called functional groups and may be familiar to you.

In an academic or professional context, to be a member of a discipline is to adhere to a similar framework to for viewing the world. Disciplines involve a common set of theories that explain the world, terms to explain those theories, and have an applied purpose related to increasing knowledge. In business, you may have colleagues that are marketing experts that are members of the marketing department and perceive their tasks differently from a member of the sales staff or someone in accounting. You may work in the mailroom, and the mailroom staff is a group in itself, both distinct from and interconnected with the larger organization.

Relationships are part of any group, and can be described in terms of status, power, control, as well as role, function, or viewpoint.  Relationships are formed through communication interaction across time, and often share a common history, values, and beliefs about the world around us.

Through conversations and a shared sense that you and your coworkers belong together, you meet many of your basic human needs, such as the need to feel included, the need for affection, and the need for control (Schutz, 1966). In a work context, “affection” may sound odd, but we all experience affection at work in the form of friendly comments like “good morning,” “have a nice weekend,” and “good job!” Our professional lives also fulfill more than just our basic needs (i.e., air, food, and water, as well as safety). While your work group may be gathered together with common goals, such as to deliver the mail in a timely fashion to the corresponding departments and individuals, your daily interactions may well go beyond this functional perspective.

There are fundamentally two types of groups, primary and secondary. The hierarchy denotes the degree to which the group(s) meet your interpersonal needs. Primary groups meet most, if not all, of one’s needs. Groups that meet some, but not all, needs are called secondary groups. Secondary groups often include work groups, where the goal is to complete a task or solve a problem. Secondary groups may meet your need for professional acceptance and celebrate your success, but they may not meet your need for understanding and sharing on a personal level.

In terms of problem solving, work groups can accomplish more than individuals can. People, each of whom have specialized skills, talents, experience, or education come together in new combinations with new challenges, find new perspectives to create unique approaches that they themselves would not have formulated alone.

If Two’s Company and Three’s a Crowd, What Is a Group?

This old cliché refers to the human tendency to form pairs. Pairing is the most basic form of relationship formation; it applies to childhood best friends, college roommates, romantic couples, business partners, and many other dyads (two-person relationships). A group, by definition, includes at least three people. We can categorize groups in terms of their size and complexity.

The larger the group grows, the more likely it is to subdivide. Analysis of these smaller, or microgroups, is increasingly a point of study as the internet allows individuals to join people of similar mind or habit to share virtually anything across time and distance. A microgroup is a small, independent group that has a link, affiliation, or association with a larger group. With each additional group member the number of possible interactions increases (Harris & Sherblom, 1999; McLean,, 2003).

Group norms are customs, standards, and behavioural expectations that emerge as a group forms. If you post an update every day on your Facebook page and your friends stop by to post on your wall and comment, not posting for a week will violate a group norm. They will wonder if you are sick or in the hospital where you have no access to a computer to keep them updated. If, however, you only post once a week, the group will come to naturally expect your customary post. Norms involve expectations that are self and group imposed and that often arise as groups form and develop.

If there are more than eight members, it becomes a challenge to have equal participation, where everyone has a chance to speak, listen, and respond. Some will dominate, others will recede, and smaller groups will form. Finding a natural balance within a group can also be a challenge. Small groups need to have enough members to generate a rich and stimulating exchange of ideas, information, and interaction, but not so many people that what each brings cannot be shared (Galanes, Adams, & Brilhart, 2000).