In basic terms, humans communicate through a process of encoding and decoding. The encoder is the person who develops and sends the message. As represented in Figure 1.1 below, the encoder must determine how the message will be received by the audience, and make adjustments so the message is received the way they want it to be received.

Encoding is the process of turning thoughts into communication. The encoder uses a ‘medium’ to send the message — a phone call, email, text message, face-to-face meeting, or other communication tool. The level of conscious thought that goes into encoding messages may vary. The encoder should also take into account any ‘noise’ that might interfere with their message, such as other messages, distractions, or influences.

The audience then ‘decodes’, or interprets, the message for themselves. Decoding is the process of turning communication into thoughts. For example, you may realize you’re hungry and encode the following message to send to your roommate: “I’m hungry. Do you want to get pizza tonight?” As your roommate receives the message, they decode your communication and turn it back into thoughts to make meaning. 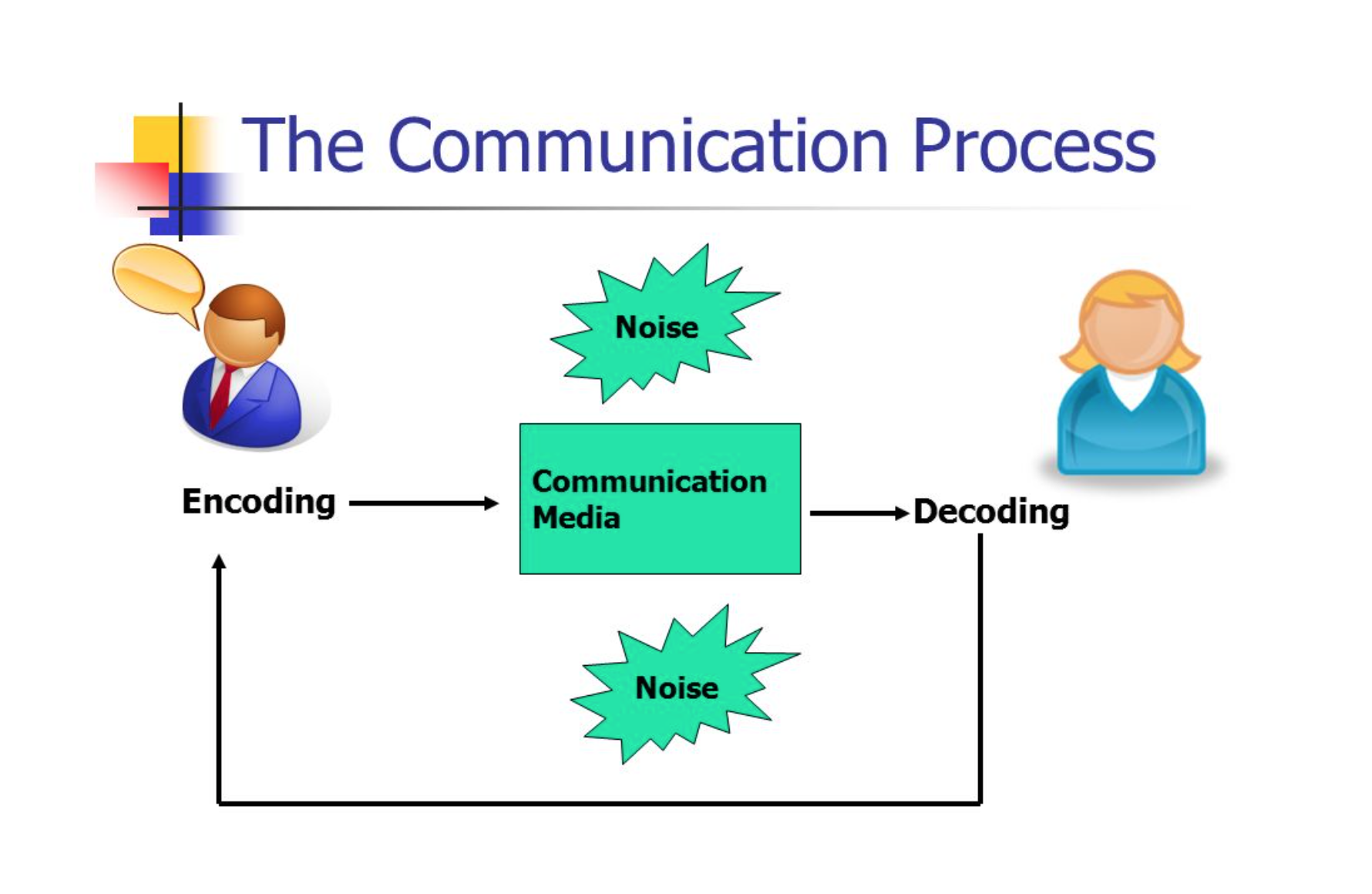 Of course, you don’t just communicate verbally—you have various options, or channels, for communication. Encoded messages are sent through a channel, or a sensory route, on which a message travels to the receiver for decoding. While communication can be sent and received using any sensory route (sight, smell, touch, taste, or sound), most communication occurs through visual (sight) and/or auditory (sound) channels. If your roommate has headphones on and is engrossed in a video game, you may need to get their attention by waving your hands before you can ask them about dinner.

The transmission model of communication describes communication as a linear, one-way process in which a sender intentionally transmits a message to a receiver (Ellis & McClintock, 1990). This model focuses on the sender and message within a communication encounter. Although the receiver is included in the model, this role is viewed as more of a target or end point rather than part of an ongoing process. You are left to presume that the receiver either successfully receives and understands the message or does not. Think of how a radio message is sent from a person in the radio studio to you listening in your car. The sender is the radio announcer who encodes a verbal message that is transmitted by a radio tower through electromagnetic waves (the channel) and eventually reaches your (the receiver’s) ears via an antenna and speakers in order to be decoded. The radio announcer doesn’t really know if you receive their message or not, but if the equipment is working and the channel is free of static, then there is a good chance that the message was successfully received.

The interaction model of communication describes communication as a process in which participants alternate positions as sender and receiver and generate meaning by sending messages and receiving feedback within physical and psychological contexts (Schramm, 1997). Rather than illustrating communication as a linear, one-way process, the interaction model incorporates feedback, which makes communication a more interactive, two-way process. Feedback includes messages sent in response to other messages. For example, your instructor may respond to a point you raise during class discussion or you may point to the sofa when your roommate asks you where the remote control is. The inclusion of a feedback loop also leads to a more complex understanding of the roles of participants in a communication encounter. Rather than having one sender, one message, and one receiver, this model has two sender-receivers who exchange messages. Each participant alternates roles as sender and receiver in order to keep a communication encounter going. Although this seems like a perceptible and deliberate process, you alternate between the roles of sender and receiver very quickly and often without conscious thought.