Groups are dynamic systems in constant change. Groups grow together and eventually come apart. People join groups and others leave. This dynamic changes and transforms the very nature of the group. Those who are in leadership positions may ascend or descend the leadership hierarchy as the needs of the group, and other circumstances, change over time.

Group socialization involves how the group members interact with one another and form relationships.

In order to better understand group development and its life cycle, many researchers have described the universal stages and phases of groups. While there are modern interpretations of these stages, most draw from the model proposed by Bruce Tuckman (1965). This model, shown in Figure 11.1, specifies the usual order of the phases of group development as a cycle, and allows us to predict several stages we can anticipate as we join a new group. 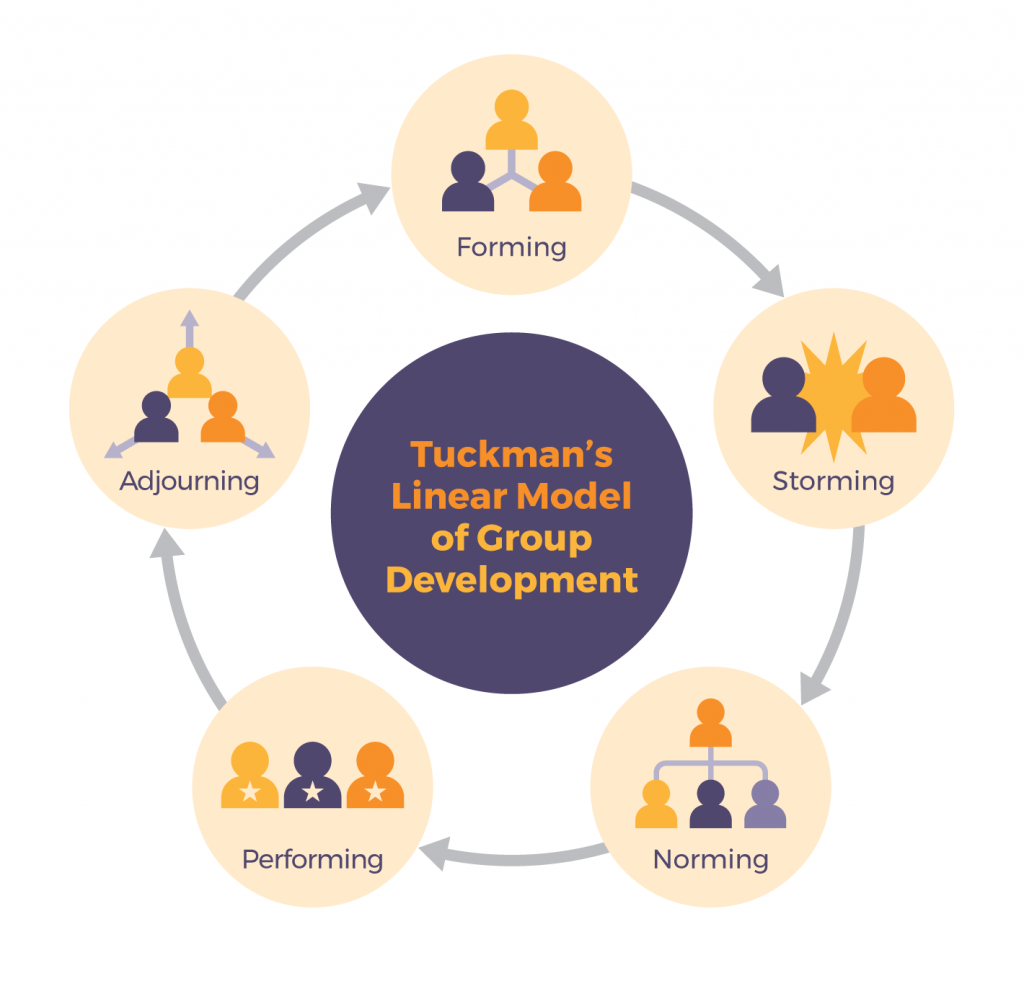 Tuckman begins with the forming stage as the initiation of group formation. This stage is also called the orientation stage because individual group members come to know each other. Group members who are new to each other and can’t predict each other’s behaviour, can be expected to experience the stress of uncertainty. Uncertainty theory states that humans choose to know more about others with whom they have interactions in order to reduce or resolve the anxiety associated with the unknown (Berger & Calabrese, 1975; Berger, 1986; Gudykunst, 1995). The more we know about others and become accustomed to how they communicate, the better we can predict how they will interact with us in future contexts. If you learn that Monday mornings are never a good time for your supervisor, you quickly learn to schedule meetings later in the week.

If you don’t know someone very well, it is easy to offend. Each group member brings to the group a set of experiences, combined with education and a self-concept. You won’t be able to read this information on a nametag, but instead you will only come to know it through time and interaction. Since the possibility of overlapping and competing viewpoints and perspectives exists, the group will experience a storming stage, a time of struggles as the members themselves sort out their differences. There may be more than one way to solve the problem or task at hand, and some group members may prefer one strategy over another. Some members of the group may be more senior to the organization, and members may treat them differently. Some group members may be at a similar level to you but may be uncertain about everyone’s talents, skills, roles, and self-perceptions. The wise business communicator will anticipate the storming stage and help facilitate opportunities for the members to resolve uncertainty before the group’s work commences. There may be challenges for leadership, and conflicting viewpoints. A clear definition of the purpose and mission of the group can help the members focus their energies. Interaction prior to the first meeting can help reduce uncertainty.

The norming stage is where the group establishes norms, or informal rules, for behaviour and interaction. Who speaks first? Who takes notes? Who is creative, who is visual, and who is detail-oriented? Sometimes job titles and functions speak for themselves, but human beings are complex. We are not simply a list of job functions, and in the dynamic marketplace of today’s business environment you will often find that people have talents and skills well beyond their “official” role or task. Drawing on these strengths can make the group more effective.

The norming stage is marked by less division and more collaboration. The level of anxiety associated with interaction is generally reduced, making for a more positive work climate that promotes listening. When people feel less threatened and their needs are met, they are more likely to focus their complete attention on the purpose of the group. Tensions are reduced when the normative expectations are known, and the degree to which a manager can describe these at the outset can reduce the amount of time the group remains in uncertainty. Group members generally express more satisfaction with clear expectations and are more inclined to participate.

Ultimately, the purpose of a work group is performance, and the preceding stages lead to the performing stage, in which the group accomplishes its mandate, fulfills its purpose, and reaches its goals. To facilitate performance, group members can’t skip the initiation of getting to know each other or the sorting out of roles and norms, but they can try to focus on performance with clear expectations from the moment the group is formed. Productivity is often how we measure success in business and industry, and the group has to produce. Outcome assessments may have been built into the system from the beginning to serve as a benchmark for success. If the goal is to create a community where competition pushes each member to perform, individual highlights may serve your needs, but if you want a group to solve a problem or address a challenge, you have to promote group cohesion.

In the adjourning stage, members leave the group. The group may cease to exist or it may be transformed with new members and a new set of goals. Like life, the group process is normal, and mixed emotions are to be expected. A wise manager anticipates this stage and facilitates the separation with skill and ease. We often close this process with a ritual marking its passing. The ritual may be as formal as an award or as informal as a “thank you” or a verbal acknowledgement of a job well done. It is important not to forget that groups can reach the adjourning stage without having achieved success. Some businesses go bankrupt, some departments are closed, and some individuals lose their positions after a group fails to perform. Adjournment can come suddenly and unexpectedly, or gradually and piece by piece. Either way, a skilled business communicator will be prepared and recognize it as part of the classic group life cycle.

Just as groups go through a life cycle when they form and eventually adjourn, so the group members fulfill different roles during this life cycle. These roles, proposed by Richard Moreland and John Levine (1982), are summarized in Table 11.1.

Using Abe as an example, the following is a group member life cycle description:

Stage 1: Abe graduated from her MBA program and is working as a financial analyst. She has decided that she would like to know more about the Chartered Financial Analyst (CFA) designation. She has contacted the CFA Institute and reached out to members in her company to discuss what the process is like to become a CFA.

At this stage, Abe is a potential member. She is not a member of the institute yet.

Stage 2: Abe reviews the requirements on becoming a CFA member, and registers as a CFA candidate. She writes the exams and is currently completing her work experience portion of the requirements. She is not yet a full member, but is enrolled in the institute while she completes her work experience. She attends events with her local CFA society to network, and learn. She finds it overwhelming as she is unfamiliar with the rules, information, and members of the society.

As a new group member, your level of acceptance will increase as you begin learning the groups’ rules, spoken and unspoken (Fisher, 1970). You will gradually move from the potential member role to the role of new group member as you learn to fit into the group.

Stage 3: Over time Abe completes her work experience requirements, and becomes a full member. As she completes projects, and works with others she learns more about the profession and membership responsibilities, she is no longer considered a “newbie”. Full members enjoy knowing the rules and customs, and can even create new rules. New group members look to full members for leadership and guidance.

Stages 4 & 5: Abe sometimes disagrees with other CFA members at her organization or in her society on different approaches to projects. As there are many ways to approach a project, there are bound to be differences in perspectives. Expressing different views can cause conflict and may even interfere with communication. When this type of tension arises, divergent group members pull back, contribute less, and start to see themselves as separate from the group. Divergent group members have less eye contact, seek out each other’s opinion less frequently, and listen defensively. In the beginning of the process, you felt a sense of belonging, but now you don’t. Marginal group members start to look outside the group for their interpersonal needs.

Stage 6: Abe works alongside another CFA member named Sue who seems to always have a different perspective than Abe on how to create reports for management. Abe likes to use technology to make the job go faster, but Sue is uncomfortable with technology and would rather do it all by hand. After several years of working together, Sue has decided to retire from her job and from the CFA Institute to pursue other interests.

Some members at this stage can overcome differences and stay in the group for years; or move on to other groups. As a skilled business communicator, you will recognize the signs of divergence, just as you have anticipated the storming stage, and do your best to facilitate success. 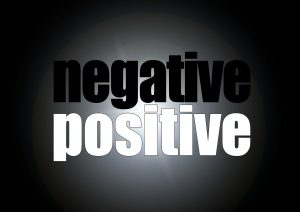 If someone in your group always makes everyone laugh, that can be a distinct asset when the news is less than positive. At times when you have to get work done, however, the class clown may become a distraction. Notions of positive and negative will often depend on the context when discussing groups. Table 11.2 “Positive Roles” and Table 11.3 “Negative Roles” list both positive and negative roles people sometimes play in a group setting (Beene & Sheets, 1948; McLean, 2005).

Now that you’ve reviewed positive and negative group member roles, you may examine another perspective. While some personality traits and behaviours may negatively influence groups, some traits can be positive or negative depending on the context.

Just as the class clown can have a positive effect in lifting spirits or a negative effect in distracting members, a dominator may be exactly what is needed for quick action. An emergency physician doesn’t have time to ask all the group members in the emergency unit how they feel about a course of action; instead, a self-directed approach based on training and experience may be necessary. In contrast, a teacher may ask students their opinions about a change in the format of class; in this situation, the role of coordinator or elaborator is more appropriate than that of dominator.

The group is together because they have a purpose or goal, and normally they are capable of more than any one individual member could be on their own, so it would be inefficient to hinder that progress. But a blocker, who cuts off collaboration, does just that. If a group member interrupts another and presents a viewpoint or information that suggests a different course of action, the point may be well taken and serve the collaborative process. But if that same group member repeatedly engages in blocking behaviour, then the behaviour becomes a problem. A skilled business communicator will learn to recognize the difference, even when positive and negative situations and roles aren’t completely clear.