You have set aside $6,000 in Canadian funds toward hostel costs during a long backpacking trip through the United States, Mexico, and Europe. After searching on the Internet, you decide to use airbnb.com to reserve your hostel rooms. The website quotes you the following amounts for each country: 1,980 US dollars, 21,675 Mexican pesos, and 1,400 euros. Have you allocated enough money to cover these costs?

Whether you are a consumer backpacking around the world on distant vacations, investing in international securities, or shopping online at global Internet sites, you must pay for your purchases in local currencies out of your Canadian currency accounts. Businesses are no different as they export and import products to and from other countries. With outsourcing on the rise, it is also common for business services such as call centres and advertising agencies to be located abroad along with manufacturing facilities. Large-scale companies may have operations in several countries throughout the world.

All of these transactions and operations require the conversion of Canadian currency to a foreign currency or vice versa. This section shows you the basics of currency conversion rates. It then explores finer details such as charges for currency conversion and what happens when one currency gets stronger or weaker relative to another.

An exchange rate between two currencies is defined as the number of units of a foreign currency that are bought with one unit of the domestic currency, or vice versa. Since two currencies are involved in every transaction, two published exchange rates are available. Let’s use Canada and the United States to illustrate this concept.

Most Canadian daily and business newspapers publish exchange rates in their financial sections. Although exchange rates are published in a variety of ways, a currency cross-rate table, like the table below, is most common. Note that exchange rates fluctuate all of the time as currencies are actively traded in exchange markets. Therefore, any published table needs to indicate the date and time at which the rates were determined. Also note that the cells where the same currency appears show no published rate as you never need to convert from Canadian dollars to Canadian dollars!

In this table, the columns represent the currency we are converting from, and the row represent the currency we are converting to. This is a typical set up in cross rates tables but make sure that you verify, rather than assume. It may also be helpful to think of the columns as “per”. For example, the row for Japanese yen and the column for Canadian dollars represents the amount of yen per one Canadian dollar.

So the information in the table above says, for example, that

This also means that one Canadian dollar is worth 87.8004 Japanese yen.

Technically, only half of the table is needed, since one side of the diagonal line is nothing more than the inverse of the other. For example, one C$ is equal to 0.6818 euros, as shown on the bottom of the diagonal. The inverse, or [latex]\frac{1}{{0.7137}}[/latex]= 1.4667 is the value of one euro in Canadian dollars and is what is listed on top of the diagonal.

Follow the ratio [latex]\text{new currency}:\text{original currency}[/latex] and set up the proportion accordingly, then solve for the unknown value:

This can be rewritten as

This section opened with your backpacking vacation to the United States, Mexico, and Europe, for which you were quoted prices of US$1,980, MXN$21,675, and €1,400 for hostels. Assume all purchases are made with your credit card and that your credit card company charges 2.5% on all currency exchanges. Can your C$6,000 budget cover these costs?

Can the budget cover the cost? We need total cost of purchases.

Putting the three amounts together, together with the 2.5% credit card charge on exchange, your total hostel bill is:

Because this is over  budget by C$44.77, you will have to adjust your vacation plans.

Things To Watch Out For

Let the buyer beware when it comes to international transactions. If you have ever purchased and returned an item to an international seller, you may have noticed that you did not receive all of your money back. For most consumers, international purchases are made via credit cards. What most consumers do not know is that the credit card companies do in fact use buy and sell rates that typically charge 2.5% of the exchange rate when both buying and selling.

Strictly using the mid-rates from the cross-rate table presented earlier, if you wanted to convert C$1,500 into MXN$ for your spring break vacation in Cancun, Mexico, how many Mexican pesos would you have?

A Mexican manufacturer imports its parts from Canada and assembles its product in Mexico, then exports some of the finished product back to Canada to sell at retail. Suppose the total cost of the imported parts, purchased and paid for in Canadian funds, is C$5.50 per unit, assembly costs are MXN$24.54 per unit, and expenses are MXN$4.38 per unit. If the product is exported back to Canada at a selling price of C$9.95 (for which its Canadian customers pay in Canadian funds), what is the total profit in Mexican pesos on 10,000 units? The manufacturer’s financial institution charges a sell rate 2% higher than the mid-rate and has a buy rate that is 3% lower than the mid-rate. Use the mid-rates from the cross-rate table.

Let’s consider the revenue. Here the Canadian currency revenues are reduced by the financial institution’s conversion fee, so buy rate is applied.

Let’s consider the cost. Here the Canadian currency costs are increased by the financial institution’s conversion fee, so sell rate is applied.

Therefore, the total profit is

An analyst on Global News is discussing how the Canadian dollar has strengthened against the US dollar. Your first reaction is that a strong Canadian dollar ought to be good thing, so hearing that this change might hurt Canada’s exports, you wonder how that could be. 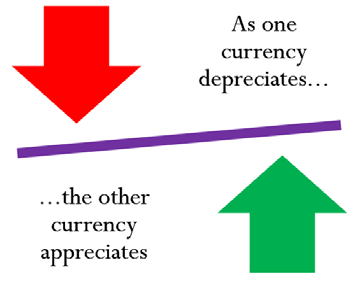 When you work with currency appreciation or depreciation, you still use the same basic steps as before. The additional skill you require in the first step is to adjust an exchange rate appropriately based on how it has appreciated or depreciated.

Things To Watch Out For

A Canadian manufacturer requires parts from the United States. It purchases from its supplier in lots of 100,000 units at a price of US$7.25 per unit. Since the last time the manufacturer made a purchase, the Canadian dollar has appreciated 0.0178 from the previous mid-rate of US$1.0218 per C$. If the sell rate is 1.5% above the mid-rate, how have the manufacturer’s costs changed?

Let’s now consider the new cost in C$. We will again have to apply the sell rate, but this time the exchange rate has appreciated by 0.0178.

So we can see that, due to the appreciation of Canadian dollar, the manufacturer has its input costs decrease by $11,969.05 since C$1 now purchases more US$.

Give it a Thought Answers

For questions 1–6, use the mid-rates in the cross-rate table below to convert the current currency to the desired currency.

19. In each of the following situations, convert the old amount to the new amount using the information provided.

20. Compare the following four situations and determine which one would result in the largest sum of money expressed in Canadian funds.

Section 5.1: Sales Taxes (Everybody Wants a Piece of My Pie)

Section 5.3: Exchange Rates and Currency Exchange (It Is a Global World)

The Language of Business Mathematics

assessed value The portion of the market value of a property that is subject to municipal taxes.

cash discount A percentage of the balance owing on an invoice that can be deducted for payment received either in full or in part during the discount period.

credit period The number of interest-free days from the date of commencement before full payment of the invoice is required.

currency appreciation When one currency strengthens relative to another currency, resulting in an ability to purchase more of that other currency than it could previously.

currency depreciation When one currency weakens relative to another currency, resulting in an ability to purchase less of that other currency than it could previously.

date of commencement The first day from which the invoice terms extend forward in time and from which all due dates are established.

discount period The number of days from the date of commencement for which a cash discount is offered.

end-of-month invoice dating A term of payment where the date of commencement is the last day of the same month as indicated by the invoice date.

exchange rate The number of units of a foreign currency that are bought with one unit of the domestic currency, or vice versa.

GST The goods and services tax is a Canadian federal sales tax on most products purchased by businesses and consumers alike.

HST The harmonized sales tax is a tax that combines the GST and PST into a single tax.

market value A snapshot of the estimated selling price of a property at some specified point in time.

mid-rate An exchange rate that does not involve or provide for any charges for currency conversion.

mill rate A tax per $1,000 of assessed value to determine property taxes.

ordinary invoice dating A term of payment where the date of commencement is the same date as the invoice date.

property taxes Annual taxes paid by the owners of real estate to local levying authorities to pay for services such as roads, water, sewers, public schools, policing, fire departments, and other community services.

PST The provincial sales tax is a consumer sales tax administered by Canadian provinces and territories.

receipt-of-goods invoice dating A term of payment where the date of commencement is the day on which the customer physically receives the goods.

sales tax A percent fee levied by a government on the supply of products.

tax rate A tax per $100 of assessed value to determine property taxes.

tax remittance The fulfillment of a tax obligation.

AV = assessed value of a property

Current Currency = currency you are converting from

Desired Currency = currency you are converting to

If the council expects to raise 85% of these expenditures from residential property taxes, what mill rate must it set?

An accountant at Lightning Wholesale needs to summarize the GST remittances, costs of goods sold, and sales for 2013 by quarter. The table below presents the purchases (in US$) that it made from its American supplier, average monthly supplier cash discounts, total monthly sales (in C$), and the average monthly exchange rate appreciation or depreciation.

(all figures are in thousands of dollars)

Fundamentals of Business Math by Ana Duff is licensed under a Creative Commons Attribution-NonCommercial-ShareAlike 4.0 International License, except where otherwise noted.