4. Distinguish between communication channels to determine which is most appropriate for particular situations.
5. ENL1813 Course Learning Requirement 1: Plan, write, revise, and edit short documents and messages that are organized, complete, and tailored to specific audiences.
i. Select appropriate channels for delivering messages (ENL1813HIT CLR 1.2)

Throughout this chapter we’ve been considering messages sent via email because it is the most common channel for written business messages. However, many professionals make the mistake of sending an email when another channel (e.g., a verbal rather than a written one) would be more appropriate for the situation and the audience. If you had to deal with inappropriate behaviour in the workplace, for instance, the right thing to do is discuss it in person with all involved because conflict resolution requires social intelligence informed by all the verbal and nonverbal information you can gather from them. You could follow up with an email summarizing a remedial action plan reached through constructive dialogue, but you would never deal with the situation by email alone. 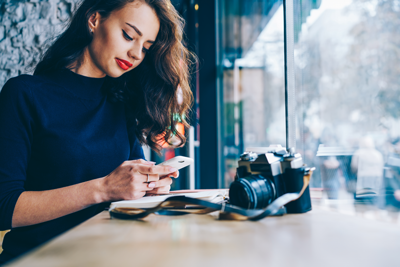 Addressing sensitive situations exclusively by email (or, even worse, text message) tends only to intensify a conflict. Email or messaging can’t possibly address the emotional complexity of a toxic situation and usually results in costly delays given the time lag between responses. Tensions also tend to escalate when people have the time to read too much into emails and text or instant messages about sensitive topics, misinterpret their tone, and write angry or passive-aggressive ones in return. (Many people tend to lack filters when writing electronically in a state of heightened emotion because they feel relatively free to express the internal monologue that they would otherwise restrain if in the physical company of the person they’re writing to.) Recognizing that email is only one channel on a spectrum of other options, however, and that others would be more efficient in certain situations, can save plenty of hassle from knee-jerk reliance on one favoured or comfortable channel.

Between traditional and rapid electronic media, we have more choice for communication channels than ever in human history. Each has its own unique advantages and disadvantages that make it appropriate or inappropriate for specific situations. Knowing those pros and cons, summarized in Table 2.3 below for a dozen of the most common verbal and written channels available, is necessary for being an effective communicator in the modern workplace. Choosing channels wisely can mean the difference between a message that is received and understood as intended (the goal of communication), and one that is lost in the noise or misunderstood in costly ways.

Choosing the correct communication channel on the spectrum of options using the criteria above involves a decision-making process based on the purposes of the communication, as discussed earlier in this chapter. Factors to consider include convenience for both the sender and receiver, timeliness, and cost in terms of both time and money. When choosing to send an email, for instance, you:

All of these decisions may occur to you in the span of a second or so because they are largely habitual. Figure 2.3 charts out that decision-making process for selecting the most appropriate channel among the 12 given in Table 2.3 above. 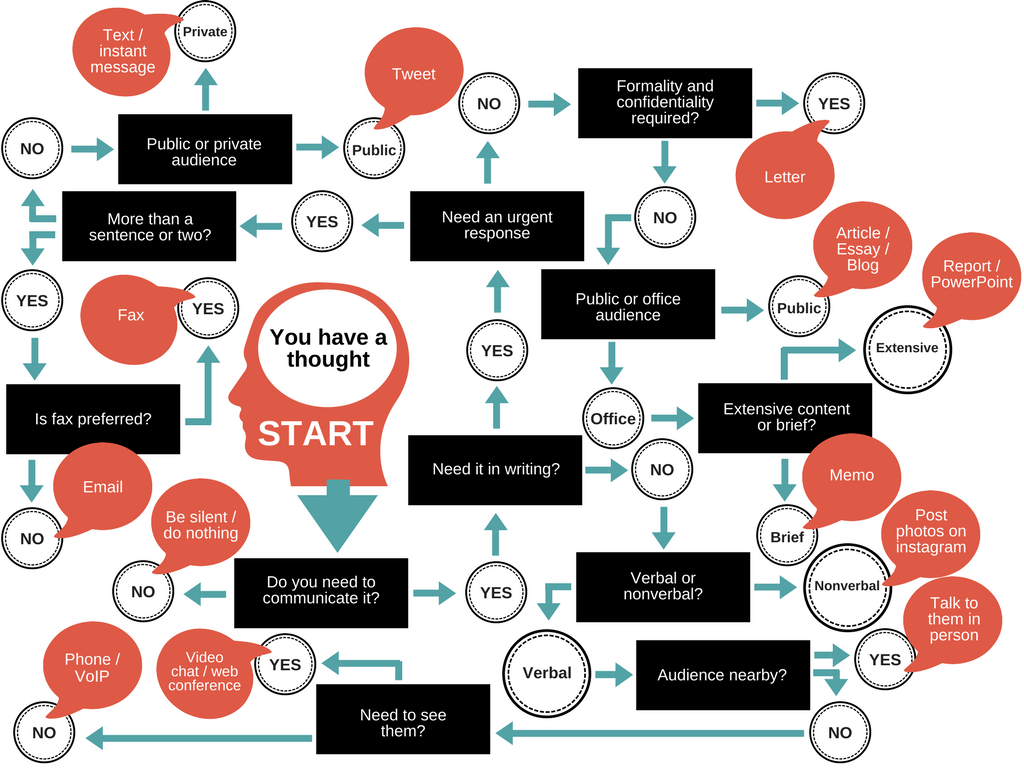 We will examine the uses, misuses, conventions, and implications of these channels in the chapters ahead, especially Chapters 6-7 on written documents in Unit 2 and Chapters 10-11 on oral communication in Unit 3. For now, however, let’s appreciate that choosing the right channel at the outset of the writing process saves time—the time that you would otherwise spend correcting communication errors and doing damage control for having chosen the wrong one for the situation at hand. If you find yourself forced to meet someone in person to deal with the damage wrought by a toxic email exchange before moving forward, just think how you would be into the next steps if you had skipped the email war and met in person to deal with the situation like adults in the first place.

Choose the most appropriate communication channel for the occasion by taking into account the full spectrum of traditional and electronic means, as well as your own and your audience’s needs.

Identify the most appropriate channel for communicating what’s necessary in the given situation and explain your reasoning.
1. You come up with a new procedure that makes a routine task in your role in the organization quicker and easier; praise for your innovation goes all the way up to the CEO, who now wants you to meet with the other employees in your role in the seven other branch offices across the country to share the procedure.
2. A customer emails you for a price quote on a custom job they would like you to do for them. (Your company has a formal process for writing up quotes on an electronic form that gives a price breakdown on a PDF.)
3. You are working with two officemates on a market report. Both have been bad lately about submitting their work on time and you’re starting to worry about meeting the next major milestone a few days from now. Neither has been absent because you can see them in their offices as you walk by in the hallway.
4. You are about to close a deal but need quick authorization from your manager across town about a certain discount you would like to apply. You need it in writing just in case your manager forgets about the authorization or anyone else questions it back at the office.
5. Your division recently received word from management that changes to local bylaws mean that a common procurement procedure will have to be slightly altered when dealing with suppliers. Your team meets to go over the changes and the new procedure, but you need to set it down in writing so that everyone in attendance can refer to it, as well as any new hires.
6. You have a limited amount of time to discuss a potential funding opportunity with a colleague in another city because the proposal deadline is later in the week and it’s almost closing time in your colleague’s office. You’ll have to hammer out some details about who will write the various parts of the proposal before you get to work on it tonight.
7. You were under contract with a local entrepreneur to perform major landscaping services. Near the end of the job, you discovered that he dissolved his company and is moving on, but you haven’t yet been paid for services rendered. You want to formally inform him of the charges and remind him of his contractual obligations; in doing so you want to lay down a paper trail in case you need to take him to court for breach of contract.

Communication at Work by Jordan Smith is licensed under a Creative Commons Attribution 4.0 International License, except where otherwise noted.