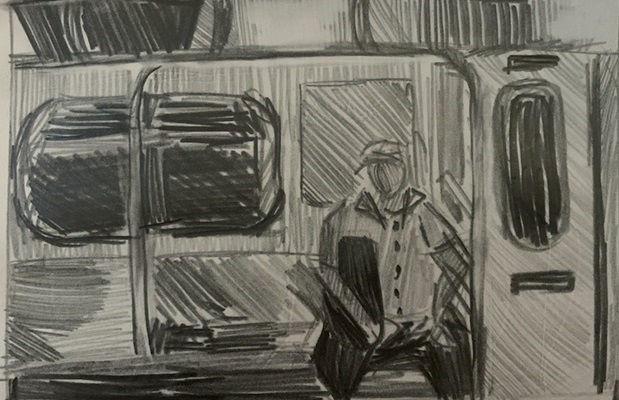 One of the topics we explored in this class was the representation of 19th century working-class people through visual culture. One of the examples we studied was Ford Maddox Brown’s famous painting, Work. We talked about its social relevance and importance, as it was a prime example of what visual culture surrounding poverty looked like in the 19th century. What stood out in this painting was the emphasis on class differences. Each figure in the painting serves a purpose to demonstrate class, this was made clear with the attire and also the composition. The working class is vibrantly depicted in the foreground and the rich in the background. The composition centers around the working class, the backbone of society, and in the background, watching are the upper class. I liked the homage to the working class.

What I appreciated most about Maddox’s painting was the direct, and timeless, symbolism representing social class. Throughout his career, Ford Maddox Brown painted the working class to emphasize their importance to the advancement of society. After all, these were the folk that kept the cities running efficiently for the rich. Maddox also recognizes the social nuances of the different classes and how they may interact with one another. I also loved how it was clear where Maddox stood politically, like myself, as a socialist.

In response to this piece, I decided to include a sketch I did of a man riding the 4 train towards Manhattan. This is my take on how visual culture should be depicting the working class or those in poverty during modern times. I included this sketch because, historically, working people would take the subway into the city, as the entire subway system is based on the need to commute to Manhattan for jobs. The subway runs 24 hours, making it a suitable mode of transport for any type of shift-work, which is typically done by the working class.

I know that folk of all walks of life take the subway, but this sketch was done at 2 am, going from Flatbush, Brooklyn into the city; the man was tired and clearly on his way to work. He was wearing a collared shirt, something we’ve seen manual laborers wearing historically. His shirt gave the impression he worked in an auto shop because of the grease stains and wear. I think it is important we have these illustrations of the working class throughout history so we can identify class and race differences, as well as the evolution of how visual culture has changed surrounding this topic.

Art in Revolution: Nineteenth-Century Visual Culture by Sara Fellman is licensed under a Creative Commons Attribution 4.0 International License, except where otherwise noted.