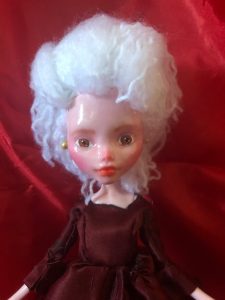 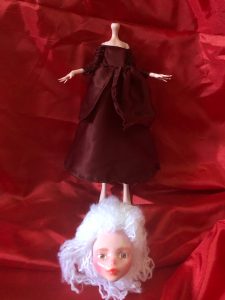 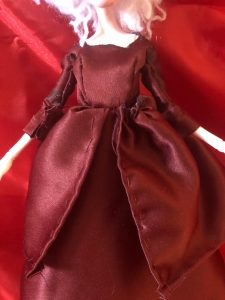 In our discussion about visual culture and the French Revolution, I became particularly fascinated with Marie Antoinette and the depictions of her. The primary painting I focused on was Queen Marie-Antoinette and her Children painted by Elisabeth Vigee-Lebrun in 1787. Her portraits of the Queen portray her in a motherly light, thanks to the serene and non-threatening expression on her face, the warm, inviting atmosphere of the room and the colour scheme, and her young children, lovingly posed with her in the painting to display their affection. While these pieces were done to sway public opinion of Marie Antoinette, could there not have also been some truth to this depiction? I was intrigued by the two starkly different views held about her: a vain, carefree, witless ruler or someone who was simply wrapped up in something she had no power to control, used as a scapegoat. 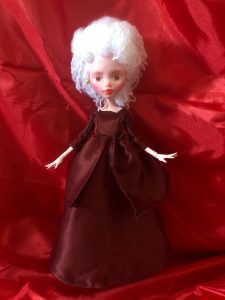 I began to work on my artistic piece after doing some research. I chose to create a doll because of the similarity it had to the various portrayals of the Queen, with the ability to be posed and captured as whatever the artist wants. In her case, Marie-Antoinette has been posed posthumously for various causes, whether it be the condemnation of the monarchy or by those who support her. She was unable to speak her case, so instead, other people presume and speak it through her. For example, the famous quote attributed to her, “let them eat cake,” referring to peasants who couldn’t even acquire simple bread, was in all likelihood not said by her. Two different sources dispute the quotation, one from Louis XVIII and the other from famous philosopher Jean Jacques Rousseau. In Rousseau’s work, “Confessions” he wrote about hearing a princess say the phrase several years before Antoinette was even at Versailles.1 This is simply a sign of people taking information and using it in tangent with her image and perception to further their agenda. She was a girl raised to be a pawn by her mother, married off at 13 years old, and became queen at 21. It is staggering to believe such a young girl, then woman, went through all of this so suddenly, and was hated no matter what she did, in part due to her being Austrian. For all intents and purposes, she was nothing more than a doll to the powerful people in her life. 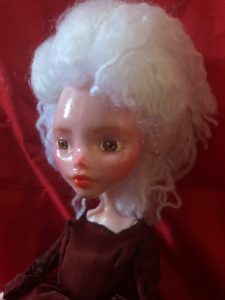 If I were to make this into a fully-fledged artistic piece, I would create packaging for the doll, captioning it like one would see on fashion dolls or even action figures. “Fully Poseable” and “Removeable Head” would be stand-out catchlines, in my opinion. I would also spend more time making the clothes as luxurious as their basis- Vigee-Lebrun’s painting that this all began with.

Art in Revolution: Nineteenth-Century Visual Culture by Marley McLean is licensed under a Creative Commons Attribution 4.0 International License, except where otherwise noted.