In our discussion of Visual Culture and modern life, we discussed Wardian cases. In the lesson, I learned that Dr. Nathaniel Ward didn’t like that the polluted air kept killing his ferns, and he realized that by putting a plant in a glass jar, it would create its own ecosystem. He went on to publish a book about it and the public loved them. It was also a game-changer for botanists because species of plants could now travel without dying. 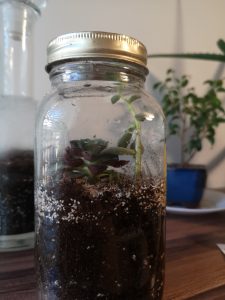 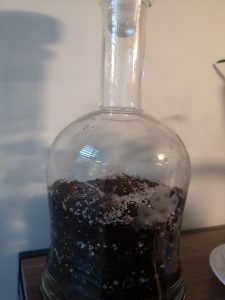 I was so drawn to this aspect of the lesson because I am a plant enthusiast and I wanted to see if I could recreate a Wardian case, so I did some research to see what care was required. Luke Keogh writes that Ward’s cases were large and had a wooden bottom holding the soil. Ward claimed that the plants could survive for long periods of time without water, and his first jar was on display in 1851 at the Great Exhibition, which apparently hadn’t been watered in 18 years.1 I, unfortunately, did not plant any ferns like Ward did, but I did plant succulents, which are a trend in the 21st century. In the first jar shown in the left pictures, I planted two succulents and chia seeds. In the second jar on the right, I planted bulbs and chia seeds. I watered both jars once before closing them up. In the left jar, there seems to be no change yet and the chia seeds did not sprout yet, maybe it needs more water? Maybe it is not airtight enough? In the right jar, the chia seeds sprouted but the bulbs have not yet, they probably just need more time. 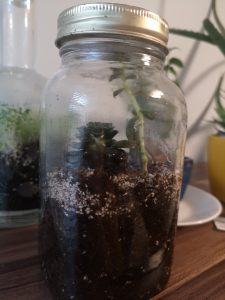 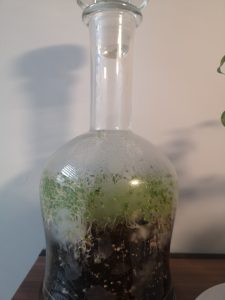 I was also interested to learn why the Wardian cases went out of style because it was very fun for me to plant, so I turned to the same article by Keogh. As it turns out, invasive species were also being moved in the dirt with the cases. Restrictions started being implemented in the 20th century to prevent this, and by 1960 the cases were phased out and replaced with polythene bags.2 I understand why the cases had to be restricted, and there is not much need now because our air is clean enough, but I just think they are very enjoyable. I will make sure to update when there is any more change to the jars.

2 Keogh, “The Wardian Case: Environmental Histories of a Box for Moving Plants,” 219.

Art in Revolution: Nineteenth-Century Visual Culture by Ella Bos is licensed under a Creative Commons Attribution 4.0 International License, except where otherwise noted.