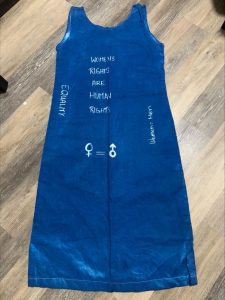 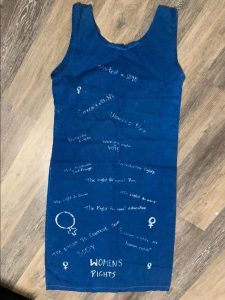 The dress I made is meant to demonstrate how gender should not determine an individual’s opportunity to succeed in society. I chose to specifically make a dress because it symbolizes gender stereotypes, which is a main concern as to why women and men were treated differently in the Royal Academy System. Gender stereotypes allowed men to establish what women were and were not capable of, this also allowed men to create limitations for women when in reality men had no right to do so rather, women should have been able to create their own limitations and strive to achieve anything they set their minds to.

Rosenfeld, Jason. “The Salon and the Royal Academy in the Nineteenth Century.” Metmuseum.org, 2004. http://www.metmuseum.org/toah/hd/sara/hd_sara.htm.

Art in Revolution: Nineteenth-Century Visual Culture by Nikki Singh is licensed under a Creative Commons Attribution 4.0 International License, except where otherwise noted.