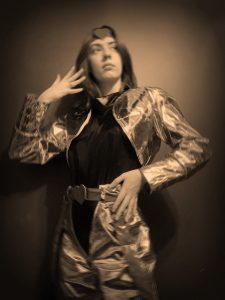 For this thematic response, I decided to create an artistic response, titled Dio, no.1. I was heavily inspired by Julia Margaret Cameron’s Ophelia, no.2 as the photo was highlighted in the lesson on 19th Century Photography and the Idea of “Truth”. I chose to create this photo as I think it plays with the idea of truth similar to the way Cameron does in her work. Relating to Cameron as I was also inspired by a fictional character that is relatively well known and decided to depict the character in my photo. One difference is that I am cast in the role of Dio, whereas Julia would use her family and friends in her photos. Despite my appearance in the photo, it does not feel like a self-portrait. The photo is not me and myself at the same time, kind of stuck in the middle of two different realities. I think this is similar to Cameron’s photo, as the photo is not of her family or friends but also not a photo of the character because that character does not exist. As well, someone seeing Cameron’s photo would know that the photo is not the “real” Ophelia. Another important aspect of my photo is that I chose to edit it to give the blurred effect and to age the photo to match Cameron’s. I think this also relates to the idea of truth in relation to the available technology at the time. As I did edit this photo, however, there is no reasonable way I could have obtained an old camera, then capture and develop my image. I think that Cameron’s work is important as it is both “real” and “fake” and she is not trying to convince anyone that it is real. Whether you argue that the image is real or fake, it still portrays the story that she intended.

Art in Revolution: Nineteenth-Century Visual Culture by Piper Vladock is licensed under a Creative Commons Attribution 4.0 International License, except where otherwise noted.