What Is Culture? Checklist

Please watch all videos and complete the activities before continuing to Part 1.1

By the end of this module you will be able to:

There are many definitions of culture, one of the most simple being: all knowledge and values shared by a group. Geert Hofstede was one of the first scholars to hold a large scale study in order to find out how cultures differ. He defines culture as:

“…the collective mental programming of the people in an environment. Culture is not a characteristic of the individuals; it encompasses a number of people who were conditioned by the same education and life experience. When we speak of the culture of a group, a tribe, a geographic region, a national minority, or a nation, culture refers to the collective programming that these people have in common; the programming that is different from the other groups, tribes, regions, minorities or majorities, or nations” (Geert Hofstede, 1980, p. 43).

Culture rules virtually every aspect of your life and like most people, you are completely unaware of this. If asked, you would likely define culture as music, literature, visual arts, architecture, or language, and you wouldn’t be wrong. But you wouldn’t be entirely right either. In fact, the things produced by a culture which we perceive with our five senses are simply manifestations of the deeper meaning of culture – what we do, think, and feel. Culture is taught and learned and shared – there is no culture of one. And yet, culture is not monolithic – individuals exist within a culture. Finally, culture is symbolic. For example, a “home”, is a physical structure, a familial construct, and a moral reference point – which is distinct from one culture to another. See: Global Affairs Canada. 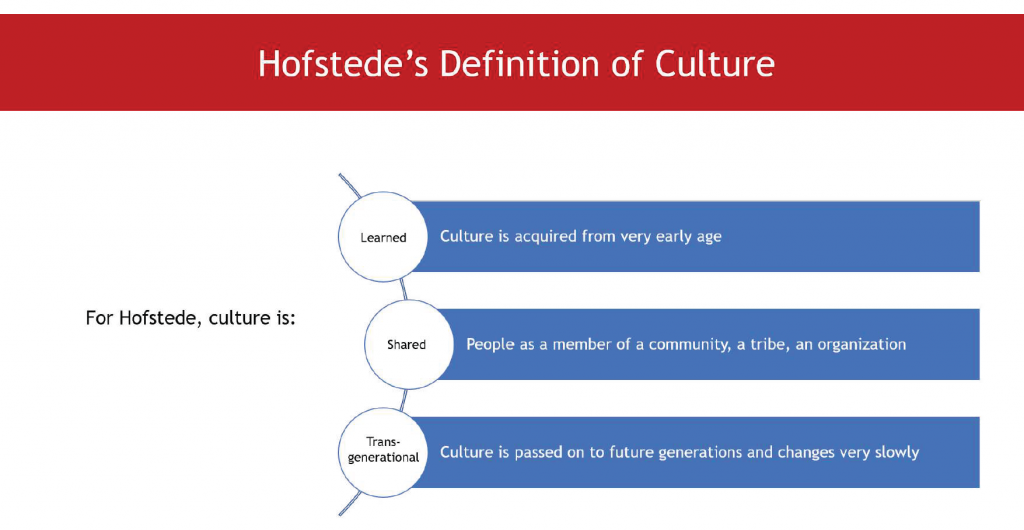 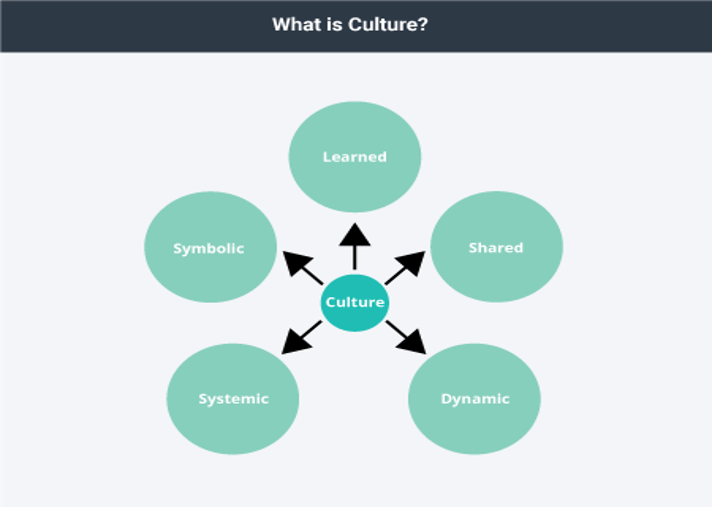 Let us now see how scholars from diverse fields have been trying to define culture.

Learned: Through active and passive teaching and socialization

Shared: By and throughout groups in society.

Dynamic: This means culture is always changing, shifting, and evolving. It is not stagnant.

Systemic: Culture operates on multiple levels and is deeply ingrained in the structure, functioning, and organizing of society.

Symbolic: Culture affects and determines the meaning and interpretation of actions, words, concepts, and things (symbols). 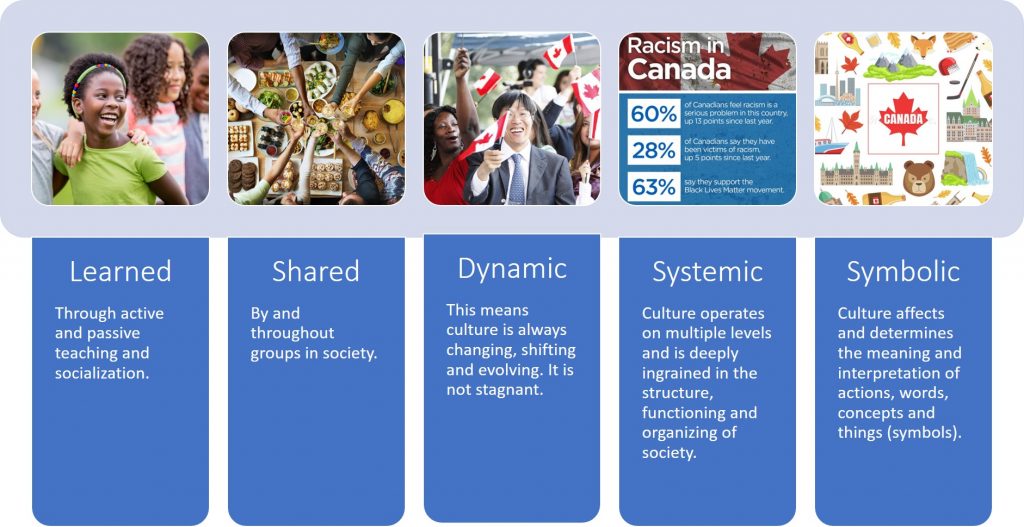 Surface and Deep Levels of Culture 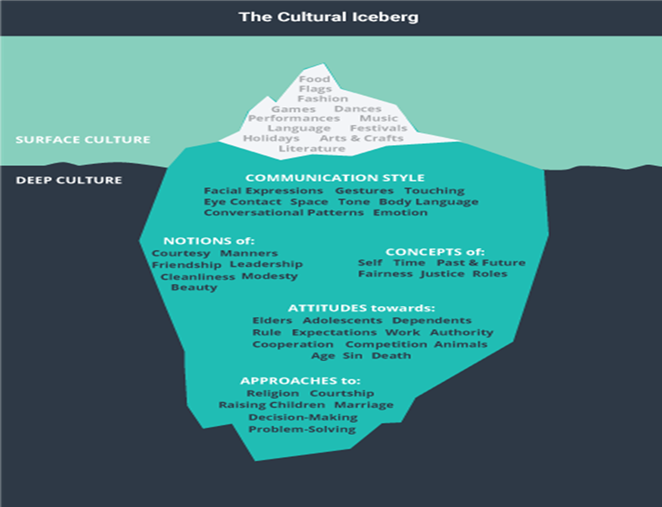 Culture is a very complex topic, but there is at least one model to make this a lot easier to understand. In this section, we’ll examine Edward T. Hall’s iceberg model of culture and see what it can teach us.

Culture is often compared to an iceberg that has, as Hall states both visible (or external) and invisible (internal) parts. As practitioners of intercultural communication we want to be aware that ‘visible’ privileges a sensory interpretation of the elements that is inaccurate and can be an example of exclusive language.  From this point forward we will use the terms ‘surface’ and ‘deep’ in relation to Hall’s cultural iceberg.   The elements of culture that we can plainly perceive, such as the way we greet each other, the traditions we celebrate, and the food we eat are some of the surface aspects of culture and are represented by the upper portion of the iceberg. Aspects of culture which are less apparent include our beliefs, values and world views, which influence the surface parts of culture, are represented by the much larger portion of the iceberg underwater, deep culture.

Far below the “water line” is a culture’s core values. These are primarily learned ideas of what is good, right, desirable, and acceptable, as well as what is bad, wrong, undesirable, and unacceptable. In many cases, different cultural groups share similar core values (such as “honesty”, or “respect”, or “family”), but these are often interpreted differently in different situations and incorporated in unique ways into specific attitudes we apply in daily situations. Ultimately, these internal forces become tangible to the casual observer in the form of observable behaviours, such as the words we use, the way we act, the laws we enact, and the ways we communicate with each other.

It is also important to note that the core values of a culture do not change quickly or easily. They are passed on from generation to generation by numerous institutions that surround us. These institutions of influence are powerful forces that guide us and teach us. So, like an iceberg, there are things that we can perceive and describe easily… but there are also many deeply rooted ideas that we can only understand by analyzing values, studying institutions, and in many cases, reflecting on our own core values.

Importance of the Cultural Iceberg

It is important to appreciate and understand the surface and deep elements of culture in order to:

You can complete this activity in any way that you prefer – Word document, PDF, PPT, visual, audio, video, etc. We have also provided you with an online form below so that you can capture your reflections and export a copy of your work.

You’ve completed: 1.0 What is Culture? Now that we have an understanding of the identifiable aspects of culture, you can move on to 1.1 Exploring Identity and how your identity is informed by those aspects. You can access 1.1 Exploring Identity from the menu at the left or the navigation at the bottom of this page.