Skip to content
The operation MERGE takes words, morphemes and features from the mental lexicon and combines them into grammatical x-bar structures. But in some sentences, a further operation is required to make the sentence pronounceable. This unit shows that a head that is generated in one position by MERGE can be moved to an adjacent head position by the operation MOVE.

1. Which tree diagram correctly represents the question, “Could you hand me those scissors?” 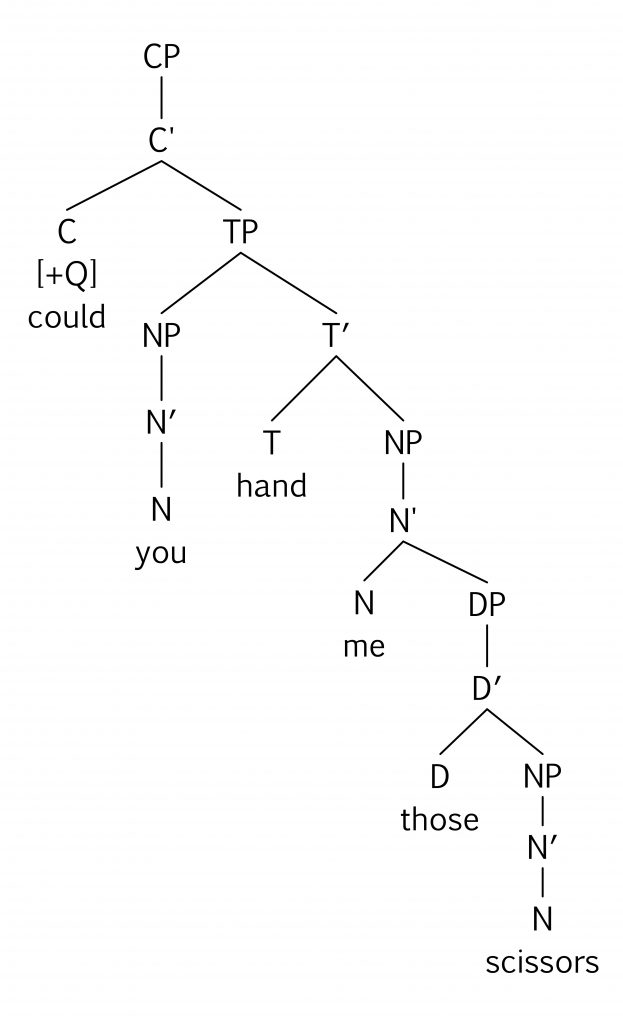 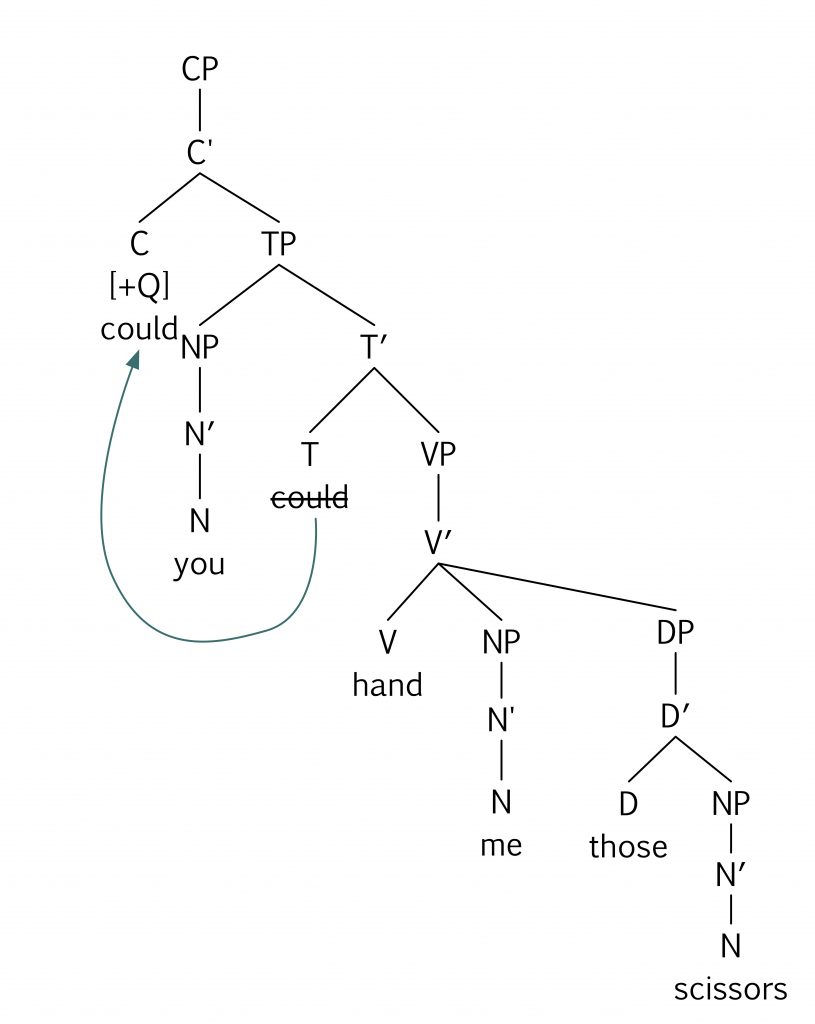 2. Which tree diagram correctly represents the question, “Does Suresh like Ethiopian food?” 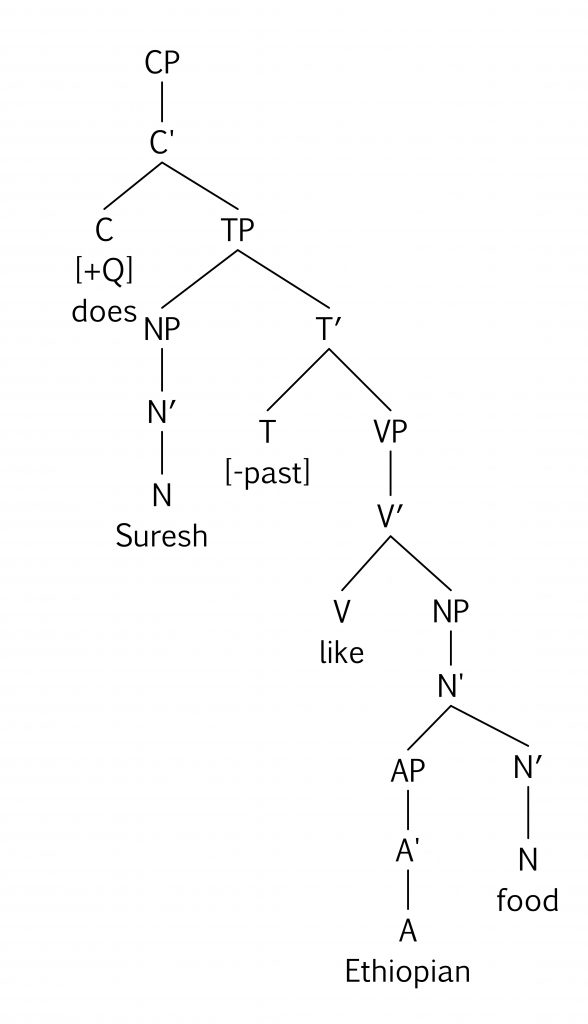 3. Which tree diagram correctly represents the question, “Will the Habs win the Stanley Cup?” 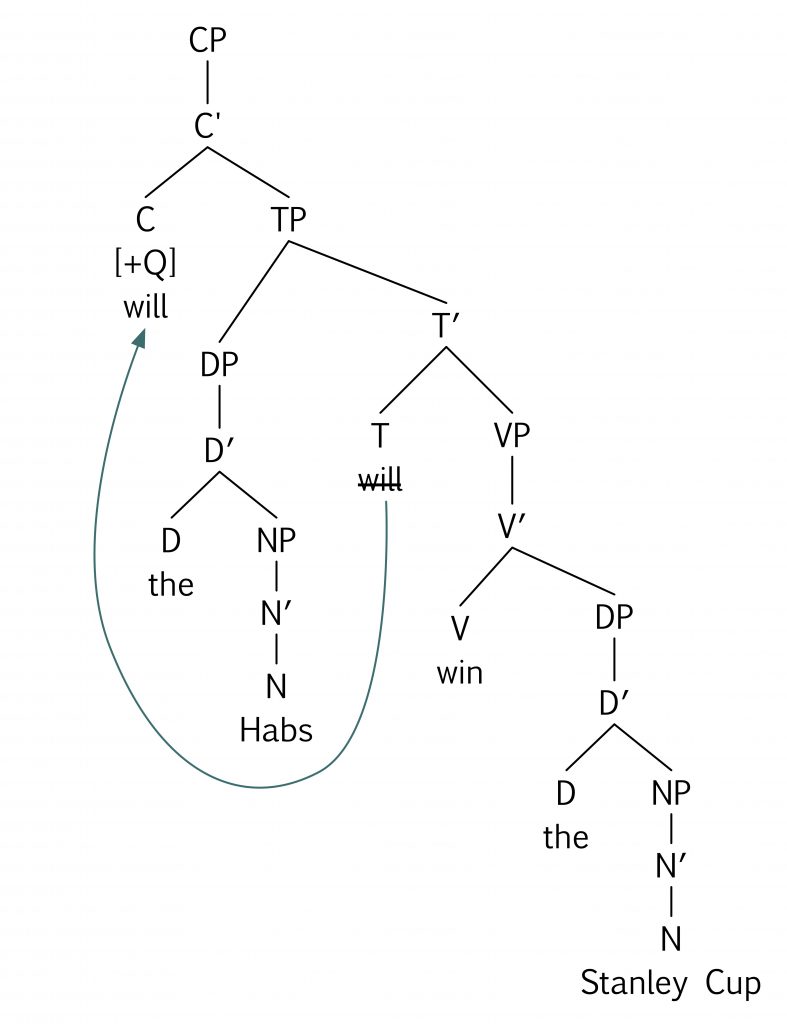 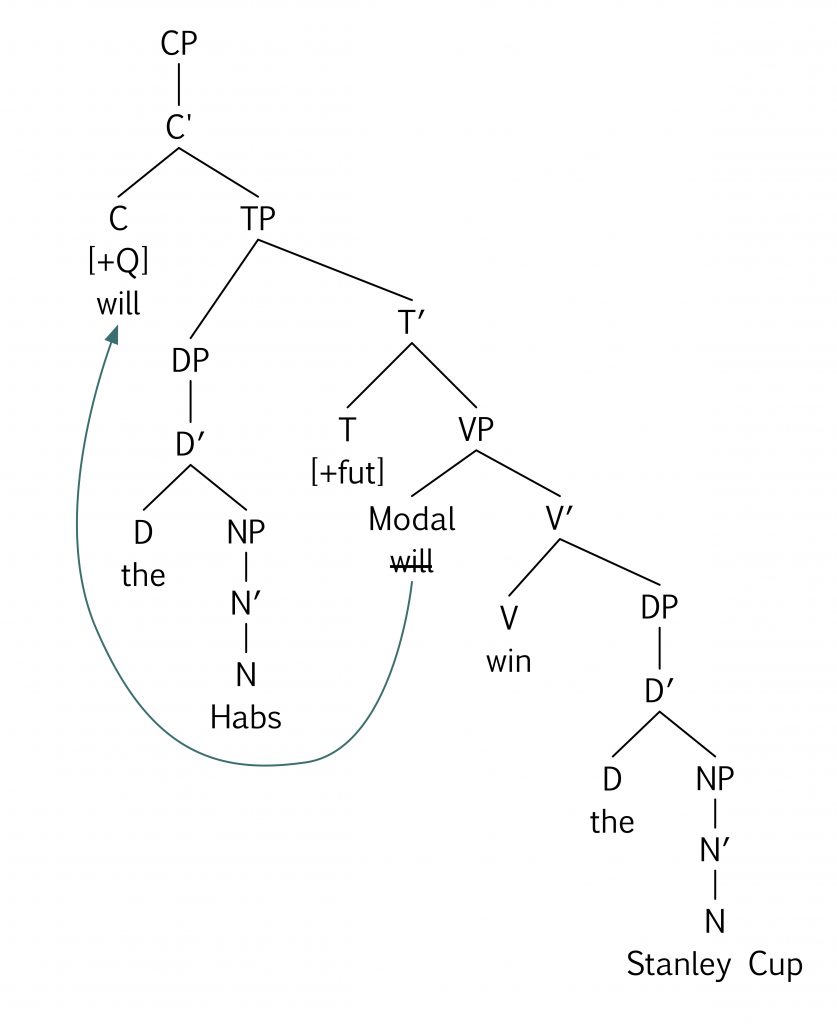 We’ve developed a model of the mental grammar that says that we draw words, morphemes, and morphosyntactic features from our mental lexicon, and then the operation MERGE combines all these items into a grammatical x-bar structure. In this unit, we’re going to look at another operation of the mental grammar, called MOVE, which takes a part of a sentence and moves it somewhere else in the sentence. But why would we want to do that? Let’s look at some examples to figure it out.

So we’re seeing another instance of a morphosyntactic feature occupying a head position. The strange thing about features is that they don’t get pronounced. We know that morphemes and words link up a form (either spoken or written) with a meaning. But features have meaning and don’t have any form of their own. The tense feature does its job by making sure that its complement has the right form. And one way that the [+Q] feature does its job is by making sure that the thing in the C-head has the right form. So if is ok when the C-head has a [+Q] feature in it, but that is not so good.

There’s another way that the [+Q] feature can make itself noticed, though. In English, if we want to ask a question, we don’t do it like this: If the Leafs will win? How do we form that question when it’s not embedded inside another clause? Of course, it’s Will the Leafs win? How did that modal will get from its position between the subject and the main verb up to the beginning of the sentence? Here’s where the operation MOVE comes in.

The theory claims that the operation MERGE generates this structure for the question. This looks just like the declarative sentence, The Leafs will win, except that it has a [+Q] feature in the C-head position. That [+Q] feature needs people to know that it’s there; it’s not like the null complementizer that doesn’t mind being silent: it changes the meaning of the sentence so it wants to be pronounced. For questions that are main clauses themselves, it’s not grammatical in English to just stick a question complementizer into the C-head position. So instead, the operation MOVE comes along, picks up the modal from the T-head position, and moves it up to the C-head position.

But when the modal moves from T up to C, the T position doesn’t disappear from the tree. Instead, the thing that moved leaves behind a little footprint or shadow of where it used to be. In the theoretical literature, it’s called a “deleted copy” or a “trace” — the idea is that it’s still there in the T-head position in our mind, even though we pronounce it up in the C-head position.

Notice that now we’ve got two levels of representation in our syntax. MERGE generates the underlying form of a sentence, what we’ll call the Deep Structure. And then MOVE comes along and, well, moves things, to give us the Surface Structure. A lot of the sentences that we’ve been looking at so far have the same deep structure and surface structure, but when we look at questions, we can see that a sentence can have some systematic differences in how it’s represented at the two levels.

We know that the T-head node has a tense feature in it. In a declarative sentence, that tense feature makes sure that the V-head in its complement has the right feature — in this case, the past tense form phoned. But we certainly don’t form a question from this sentence by asking, “Phoned Samira?” What happens in this kind of sentence is that we bring the auxiliary do into the T-head position. Because in this case the tense feature is [+past], do becomes its past-tense form did. Now that the past tense feature is on the auxiliary, it won’t be on the lexical verb, so the verb phoned in V-head just takes its bare form phone. And then to get the [+Q] feature supported, MOVE takes did from the T-head position and moves it up to the C-head position, leading to the Surface Structure, “Did Samira phone?”

Your challenge now is to think about how our mental grammar forms yes-no questions for sentences that have non-modal auxiliaries in them. What do the Deep Structure and Surface Structure look like for each one? Try to figure it out!