Mediation is defined as a technique to train the mind or induces an altered state of consciousness, to increase mindfulness. The practice of meditation has rich roots that extend back to the century-old traditions of Eastern religions. In Western society, the practice of meditation has been adopted and utilized as a self-help tool for stress reduction (Cutshall et al., 2011). Both secular and non-secular forms of meditation involve the regulation of attention and emotions, utilizing techniques such as focused attention (FA), open monitoring (OM), and controlled breathing. FA requires that individuals actively direct their attention to an object, sensation, or idea (i.e. a mantra). OM involves attending to the transiency of thoughts and bodily sensations as they change from moment-to-moment (Lutz et al., 2009).

The most widely practiced form of meditation is Mindfulness meditation (MM), which is based on the concept that mindfulness is the ability to; pay attention, on purpose, to thoughts and sensations in the present moment, in a non-judgemental manner. (Kabat-Zinn,1994). Mindfulness meditation has been integrated into therapies to treat psychiatric disorders such as major depression and anxiety, as well as neurodegenerative diseases like Parkinson’s disease and Alzheimer’s disease (Shonin & Van Gordon, 2016).

Making the Connection Between Meditation and Neuroscience

Initial research on meditation focused on identifying how long-term practice influenced cortical activity using electroencephalography (EEG). Seminal work by Lutz et al. (2004), uncovered that long-term Buddhist practitioners exhibited EEG patterns in the lateral frontoparietal area that were indicative of phase synchrony of gamma-band oscillatory activity (25-70 Hz). This pattern of cortical activity has been associated with the integration of information across neural networks through short and long-term synaptic changes that underlie processes of cognitive and affective regulation. These findings suggest that the practice of meditation may promote functional changes of activity in the brain, consistent with the experience-dependent nature of neuroplasticity (Pascual-Leone et al. 2005; Travis & Arenander 2004).

Although these studies provided evidence for the meditation-brain connection, it is important to consider the limitations of utilizing EEG to characterize neural changes associated with meditation practice. EEG is a method that measures cortical activity by using electrodes placed on the scalp to detect extracellular currents produced by postsynaptic apical dendrites of pyramidal neurons. These electrical signals however are distorted as they pass through the skull. As a result, using EEG makes it difficult to infer the source of observed cortical activity. To this point, it is also difficult to detect changes in neural activity in deeper cortical structures due to their distance from surface electrodes. These limitations are referred to as the inverse problem of EEG. The advantage of EEG is that the technique offers a high degree of temporal resolution, as it can be used to detect changes in cortical on the order of milliseconds (Grech et al. 2008).

To address the limitations of EEG, subsequent studies utilized techniques such as functional magnetic resonance imaging (fMRI) to measure local changes in blood oxygenation as a level of neuronal activity, referred to as the BOLD response. It was found that individuals that practiced meditation exhibited reduced activity in the default mode network (DMN) during the practice of meditation compared to rest. The DMN is a collection of cortical structures including; the posterior cingulate cortex, medial prefrontal cortex, and the angular gyrus. The DMN has also been referred to as a task-negative network as activity in these regions is associated with self-referential processing and mind-wandering that divert attention while completing a task. Considering this, the practice of attentional regulation through meditation practice has been hypothesized to suppress the activity of this network to improve focus on tasks outside of meditation practice (Garrison et al. 2015; Pagnoni 2012).

Using magnetic resonance imaging (MRI), researchers found that long term meditators exhibit an increased cortical thickness in the prefrontal cortex and right anterior insular cortex which correlated with their level of experience (Lazar et al., 2005). The prefrontal cortex has been shown to integrate emotion and cognition, a skill that is hypothesized to develop through meditation practice (Gray et al. 2002).  As well, an increased thickness of the right anterior insular cortex is related to visceral awareness that is developed by attending to bodily sensations through OM. These findings support the theory that long-term meditation practices induce changes in cortical structure. The cross-sectional design of this study did not allow for the observation of how meditation practice changes the structure of the brain over some time, especially in naive meditators.

A longitudinal study conducted by Holtzel et al., (2011) was conducted to observe changes in grey matter volume throughout the brain after individuals completed an 8-week long mindfulness-based stress reduction program (MBSR). It was found after program completion, individuals exhibited increased grey matter volume in regions of the brain including the posterior cingulate cortex, part of the DMN.  Other studies have found significant changes in grey matter volume in emotion processing and regulatory regions including the insula, anterior cingulate cortex (ACC) and the amygdalae of meditators (Marchand, 2014).

In addition to examining changes in grey matter volume in the brain after meditation practice, white matter tracts that integrate information across brain regions have also been a focus of study. Using diffusion tensor imaging (DTI), it was found that after a short period of meditation practice, individuals exhibited an increase in white matter connectivity from the anterior cingulate cortex (ACC) through the corona radiata to other regions of the brain. This supports that meditation increases connectivity in a region of the brain that is involved in self-regulation, a skill that is central to the meditation practice. This finding is extremely interesting because the observed alterations in white matter structure were viewed after a short training period (11 hours), whereas in previous studies examining the white matter effects of skill training, months to years were required to induce changes in white matter structure (Tang et al., 2010).

Given that meditation has been found to induce neuroplastic changes in brain structure and neural activity, extensive research has been conducted focusing on the psychological effects of these changes. For example, mindfulness interventions have been integrated into traditional cognitive behavioural therapies to treat individuals that suffer from affective disorders This form of mindfulness-informed psychotherapy is referred to as mindfulness-based cognitive therapy (MBCT). A study by Ives-Deliperi et al. (2013), examined how an MBCT intervention influenced the brain activity of bipolar disorder patients, using fMRI, and how these changes were associated with behavioural factors such as anxiety and emotional regulation. After treatment, patients were found to have improved anxiety and emotional regulation. As well, patients exhibited a decrease in mPFC activation during a mindfulness task compared to controls. This indicates that mindfulness practice suppresses activity within the default mode network to improve attentional regulation during the practice of mindfulness.

A  recent systematic review on the efficacy of mindfulness-based therapies found that this therapy has similar efficacy to traditional cognitive behavioural (CBT), behavioural therapies, and pharmacological treatments. This indicates that mindfulness is a valid therapeutic intervention for the treatment of anxiety-related disorders and affective disorders (Khoury et al., 2013). Although these findings are promising, little is known about the long-term efficacy of mindfulness-based therapies in relapse prevention. Recent studies have shown that MBCT is important for the prevention of major depression relapse patients (Matthew et al., 2010), however more studies of this nature must be completed. 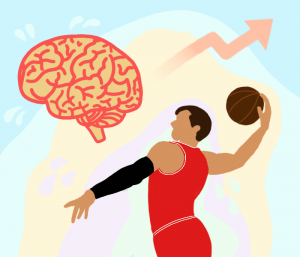 Perhaps one of the most significant impacts mindfulness meditation has made is on stress reduction. Being exposed to mindfulness meditation training can lead to lower cortisol secretion, reduced heart rate variability and anxiety symptoms, which are often expressed as a result of highly stressful stimuli (Tang, Hölzel and Posner, 2015).

Post-secondary students are highly susceptible to chronic stress due to the significant life transition students go through such as living away from home, living in isolation, difficulty finding a sense of belonging, taking up work, a decline in academic performance due to high expectations set by the institution, coupled with an expression of suicidal thoughts and ideations (Auerbach et. al, 2016; Bruffaerts et. al, 2018; Wilczyńska et. al, 2019 and Mortier et.al, 2018). Moreover, they are at a higher risk of experiencing burnout.

The same efficacy of mindfulness meditation applies to young adults as well, particularly post-secondary students. There is a significant reduction in state anxiety and decreased stress levels due to meditation practice (Edwards et. al, 2018; Burgstahler and Stenson, 2018; Lemay et al, 2019 and Basso et al, 2019). Due to these promising results, mindfulness meditation has evolved as a cost-effective and accessible alternative for treating anxiety and is being implemented in various post-secondary settings. 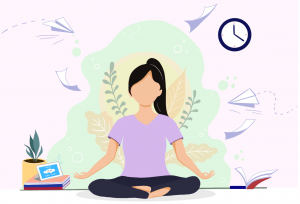 Although in-person guided meditation is a popular form of accessing meditation, it might not be practical for those with a hectic schedule, as it may be a challenge to attend in-person meditation sessions regularly. In this regard, mindfulness meditation apps present as a time-saving alternative to classroom-based guided meditation. Users of meditation apps such as Calm, Headspace and Smiling Mind reported reduced depression, stress and anxiety levels (Huberty et.al, 2018; Flett et. al, 2019). There is increasing popularity of mindfulness-based apps, which are providing a promising alternative for those with packed schedules.

However, these promising results must be evaluated carefully. One major issue of the mindfulness meditation study is the use of self-report questionnaires, which can lead to self-report bias and skew the overall results of the study. Furthermore, a high attrition rate and an unregulated intervention period and risk for security and privacy (Price et al, 2014) are some of the major concerns raised for meditation apps. There need to be more controlled and rigorous study designs to replicate these results and render increased legibility to the claims that the meditation apps used to market to the public.

As outlined in this chapter, meditation practice induces neuroplastic changes in the brain much like practicing other skills. Meditation induced changes occur at the level of grey matter and white matter, as well as neural activity. These changes are associated with regions of the brain that are involved in the regulation of attention and emotion, skills that are developed through a regular meditation practice. These findings have important clinical implications for supplementing traditional cognitive behavioural therapies to treat psychiatric disorders such as major depression, anxiety, and bipolar disorder. The field of contemplative science, however, still requires improvement in the methodology utilized to study changes in the brain and behaviour that occur as a result of meditation practice.

The PODCAST can be found at https://youtu.be/v0J8JenhYdE

The transcribed version can be found at https://issuu.com/sunnyshbaek/docs/podcast_transcribed_version

Katz, E. (2020). What is mindfulness II: Mindfulness as a metatheory. [Microsoft PowerPoint]. Retrieved from: