The lack of blood flow to an area of the brain known as ischemia. This is particularly dangerous in the brain, as a lack of circulating blood deprives neurons of oxygen and nourishment.  Stroke is the condition of ischemia specific to the brain and can occur in 2 different ways: hemorrhage or blockage. In the case of hemorrhage,  the release of blood from blood vessels after the vessel rupture causes damage by cutting off connecting pathways, resulting in local or generalized pressure injury as well as impaired blood flow to the brain.  The blockage of a blood vessel causes a disruption of blood flow to that region of the brain as shown in Figure 1. This blockage can be either thrombotic or embolic.

Most forms of ischemia in stroke involve the thrombotic or embolic types of blockage, and a much smaller percentage involve hemorrhage. Although both are serious, all strokes have a therapeutic window that allows for some neurons to be rescued.

The brain requires a continuous supply of oxygen and glucose to maintain normal function. If cerebral blood flow is interrupted, then neuronal metabolism can be effected within 30 seconds and will completely stop within 2 minutes of deprivation. If left unchecked, neuronal cell death occurs in 5 minutes. During this time period, these neurons will not be able to maintain their resting membrane potential. Upon death, they will release potassium ions causing other nearby cells to depolarize. In addition, Na+/K+ exchanger pumps will no longer have ATP production to drive their activity, causing neurons to depolarize and fire inappropriately. This is the basis of the glutamate excitotoxicity theory proposed by John Olney and may explain why pyramidal neurons in the hippocampus and Purkinje cells in the cerebellum that rely on glutamate neurotransmission are particularly vulnerable to ischemia.

Following ischemia to a region of neurons, the increased release of glutamate and its decreased uptake without ATP production (Figure 2.) produces an excess of glutamate which impacts downstream neurons. Glutamate will impact a number of glutamate specific receptors such as the AMPA, NMDA and metabotropic type receptors which in turn will cause activation of voltage-gated Ca2+ channels, all of which result in the increase in intracellular Ca2+ levels. In turn, this will activate the protease-activated receptor PAR4 which will activate the pro-apoptotic proteins BAX/BAD that will then form a complex with the mitochondrial factor cytochrome c which is released from the mitochondrial matrix as the intracellular ATP stores fail. This complex, in turn, will then activate caspase-9 and the downstream and ultimate factor caspase-3 which is involved in the apoptotic DNA fragmentation and eventual death of the neuron. As this is a programmable/apoptotic form of cell death, there are a number of therapeutic interventions that may prevent this stroke and ischemia-induced form of cell death. 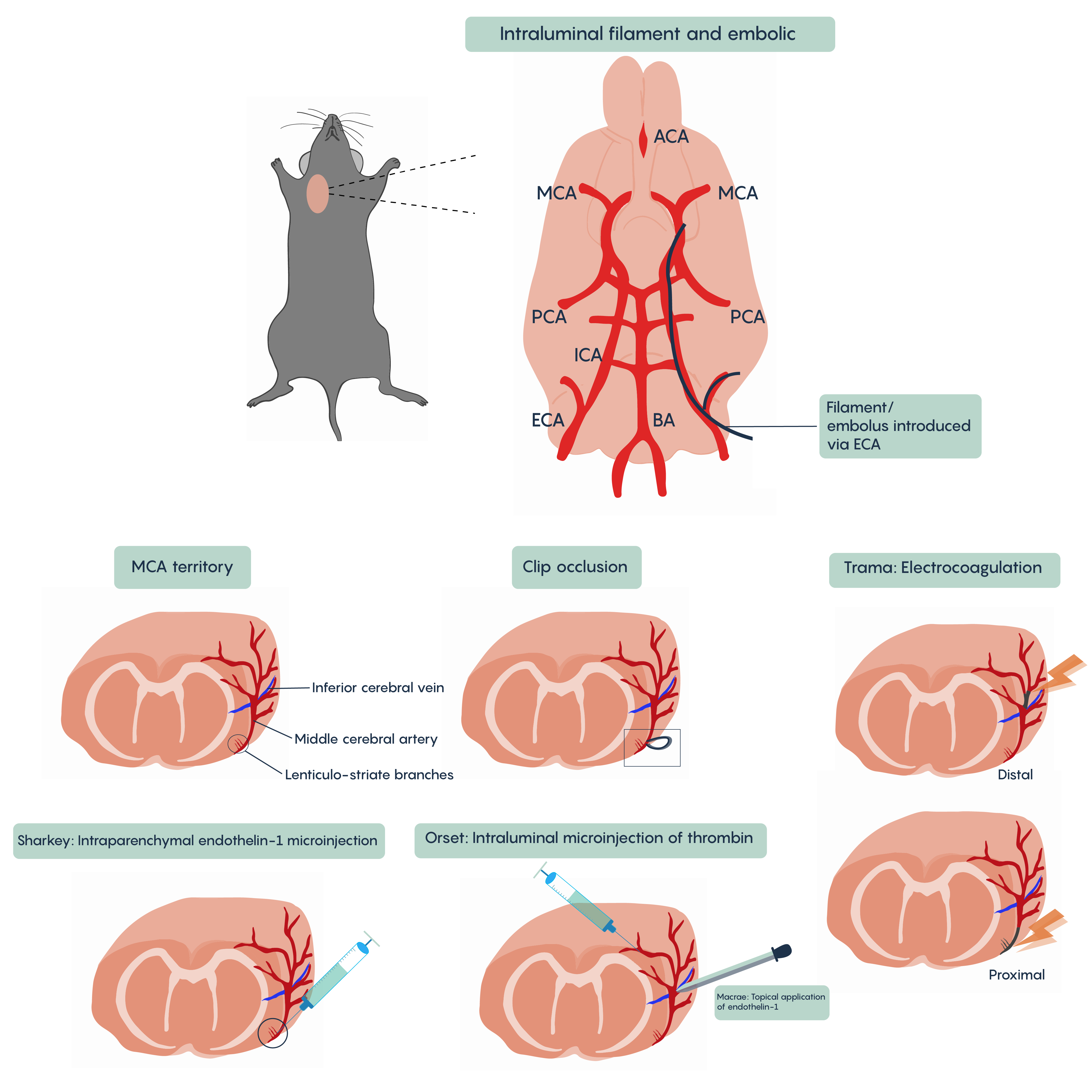 A number of different animal models of stroke have been developed. Most involve interruptions in blood flow such as the intraparenchymal (i.e. directly into the brain tissue) injection of drugs such as endothelin-1 (Et-1) which induces vasospasms of the blood vessels creating ischemia, of the introduction of coagulants such as thrombin injection that will block blood vessels (Figure 4. Animal models of stroke). Most methods will involve blockade of normal blood flow to an area of the brain to produce ischemia whether through occlusion of a blood vessel such as the middle cerebral artery (MCA) or the chemical methods described here. These animal models have proved invaluable in understanding the role of different factors such as cytochrome c or BAD/BAX in excitotoxicity and hold the promise of developing therapeutic interventions.

Stem Cells in the Recovery of Strokes

A key player in stroke recovery is adult stem cells, also known as somatic stem cells. These cells are undifferentiated with a non-specific function. Stem cells are located in specific areas known as germinal niches, within a tissue. Within these areas, the cells remain in a quiescent, or dormant, state until a signal such as a disease or tissue damage is received. In the brain, the germinal niches primarily include the subventricular zone (SVZ) and dentate gyrus of the hippocampus where neural progenitor cells (NPCs) reside. The SVZ is composed of four main types of cells which include proliferating neuroblasts (Type A), slowly proliferating stem cells (Type B), transient amplifying stem cells (Type C) and ciliated ependymal cells (Type E). Once dividing, the stem cells may produce additional stem cells (self-renewal), or they may differentiate into specific cell types with a specific function.

Tissue injury, such as brain ischemia, can trigger the proliferation of NPCs in the anterior aspect of the SVZ. At the site of injury, NPCs will undergo neurogenesis in which they will differentiate into mature neurons. Before reaching their final destination, the precursor cells will first need to travel through the rostral migratory stream (RMS). The RMS is a route directly connecting the SVZ to the forebrain, allowing NPCs to easily access ischemic regions. Interestingly after an ischemic stroke, researchers have noted increased amounts of Type A and C cells, as well as a temporary increase in Type B and E cells. This surge in proliferation has shown to peak approximately a week following the stroke. However, after three to five weeks, the mitotic activity declines to basal levels. As a result, it is believed NPCs may be responsible for promoting neural remodelling and repair. Although this process is still not well understood, it remains to be a promising therapeutic approach to treat a variety of brain injuries such as ischemic strokes.