An operating budget is management’s plan for generating revenue and incurring expenses over the time of the budget. Operating budgets are usually in effect for a fiscal year, but they are subject to alterations if anticipated revenues or costs change markedly from what was projected.

In the following section, it is assumed that there are records from previous years that can be used to create an operating budget. When a business first starts up, the operating budget is based upon a careful analysis of the market and the expertise senior management brings with them to the new enterprise from other jobs in the food service industry. Creating a first budget is beyond the intent of this book.

Profit can only occur when sales exceed the breakeven point. That is,

Overhead is a fixed cost. Your rent payment usually is the same regardless of the level of your sales. Labour costs are semi-variable costs. As was explained earlier, some labour costs are constant and must be paid even if sales do not meet expectations while other labour costs are the result of increases in sales.

Since labour costs are not truly fixed, the variable part of the cost of labour can be manipulated in times of poor sales by cutting back on paid hours, introducing shift changes, and even laying off personnel. Personnel working in the food industry often learn how flexible their hours can become in times of poor sales!

Hoped-for profit can be treated as a fixed cost. Often, profit is considered to be that which is left over after all costs have been paid. However, more and more businesses try to treat profit as an expense that should be met.

Planning for a Profit

The first step in planning for a profit is to determine how much return the investor or company needs. The restaurant business is considered a risky investment. Some people make a lot of money; more people go broke. If people can earn 10% by investing their money in safer investments, investors will expect to earn more than this as they have a chance of losing all their money.

A restaurant owner has put up $100 000. The owner wishes to have a profit of 15%. The cost to the restaurant for the use of this money is:

Remember, fixed costs include rent, heat, light, and other overhead costs. For this discussion, assume the restaurant has been in business for a number of years and last year the overhead costs amounted to $55 000. These costs have been increasing at about 5% per year.

The projected fixed cost for next year will be:

The semi-variable cost of labour can be treated in much the same manner. Assume that last year labour costs were $75 000 which was an increase of 5% over the previous year. Other indicators suggest that labour costs will increase about the same for the coming year.

The projected labour cost for next year will be:

To forecast sales it helps to have a past record on which to base projections. Assume such records are available and the last year sales were at $225 000. It is thought sales can be increased by 10% this year.

To calculate food costs, use the equation derived previously.

In the example being developed, food costs are:

The information gathered above can be used to generate a projected budget.

Past sales figures are collected from monthly up-to-date income statements and from the audited budget of the previous year. The past sales should be carefully analyzed to see if any trends are emerging. For example, if sales have been falling in the last quarter, you want to ask why, as the drop in revenue may be a sign of continuing trouble in the new fiscal year.

The assumption is usually made that growth in the past year will mean growth into the new year. This is probably true but only if the conditions of the new year are thought to be nearly the same as the past year. If a new restaurant is going in across the street, if the local mill is going to lay off 150 workers, if previously untaxed food is going to be subjected to a sales tax, or if the minimum wage is going to be increased and you depend on help paid at or near that level, past growth records may mean very little. Equally important are positive changes in the community. For example, an excellent review from a restaurant critic can have a huge impact on business that was not counted in your projections.

If possible, compare the monthly food sales of last year with its corresponding sales for the previous year. Again, this is only possible if the restaurant has been in business a few years. Such a comparison is shown in Figure 31.

The sales picture looks bright in Figure 31. Management could probably safely assume that next year the growth will continue. They would then draw up an estimated monthly sales chart.

The monthly projections can be used in the next fiscal year to track sales in relation to the projection. For example, if sales in January are significantly less than the projection, is it time to worry, or can the loss be picked up next month? That is the type of question management has to be constantly asking.

A monthly projection is shown in Figure 32. Last year’s sales are increased by 10%, which is the total percentage change in sales as reflected in Figure 31. Less conservative managers might be tempted to project a greater percentage increase based on the steady growth since June. However, it is usually best to err on the side of caution as it tends to be easier to handle excess income than it is to handle income shortfalls. But, if sales do increase dramatically, management should be prepared to redraw the budget.

Again, the best plan is to analyze past costs and see if they can be lowered and to determine if the profit level must be adjusted. Costs tend to go up, but fixed costs may stay at the same level as in the previous year while some controllable costs might actually decline after careful analysis.

Costs include the following:

If the figures are available, monthly costs of the current and last operating years can be used. However, it is quite acceptable to use the annual current cost and prorate across every month by using cost percentage figures on the projected sales for each month.

To find annual cost figures, monthly reports can be used and summarized on a single form (Figure 33). Alternatively, the previous year’s income statement can be used.

To convert the figures into cost percentages, the individual costs are divided by the total sales (Figure 34). The percentages have been rounded off to the nearest percent.

If management feels that before-tax profits have to be increased by more than the amount that will be generated by multiplying the present profit percentage by the projected sales, decisions will have to be made regarding increasing sales or reducing costs.

For simplicity, costs have not been broken down into the subcategories as they would appear on an actual budget statement. However, the example shown in Figure 35 provides a general idea of what a monthly budget looks like. 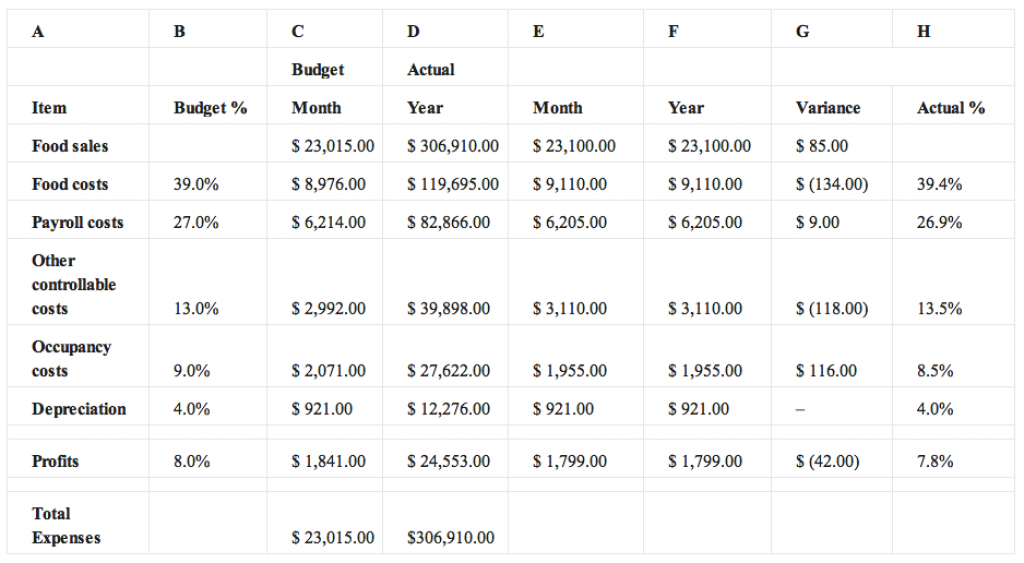 The monthly budget form should be completed soon after all expenses are known. Most business will have accounting software that will track the costs and actual sales against the budgets.

The simplest way to examine a budget is to go through it in point form line by line. The following refers to Figure 35.

An income statement is an official financial document that presents the actual income and expenses of a business for a declared period of time — often the end of each month and at the end of the fiscal year.

As you can see, there is a great deal of financial information that goes into the operation of a restaurant. Learning to understand and interpret the information is a skill that you will need to develop in order to manage a kitchen successfully.

Basic Kitchen and Food Service Management by The BC Cook Articulation Committee is licensed under a Creative Commons Attribution 4.0 International License, except where otherwise noted.