So what is translation, exactly? Understood broadly, translation is the act of taking a message that has been created in one language, such as English, and expressing it in another language, such as French. When used in this broad sense, translation can encompass written, spoken and signed modes of language, and sometimes even a mixture of these. However, translation is usually understood more narrowly to refer to the transfer of a written message from one language to another, while interpretation is more commonly used to refer to cases where the message is spoken or signed. In this resource, we’ll be using the term translation in the narrower sense of working with written texts. 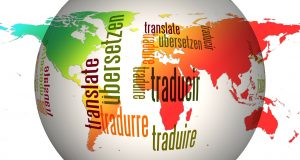 For some types of texts, it can be sufficient to simply translate between languages, such as English and French. Most languages do indeed have a sort of standard variety that can be understood by the vast majority of speakers of that language. However, sometimes it’s important to go beyond this high level and to focus more specifically on a particular language variety, such as Canadian English or Canadian French. When a text is customized to take into account a particular language variety and regional culture, the process is often referred to as localization rather than simply translation. When localizing a text, a translator needs to take into account not only the language but also the region, and the language and region together make up the locale. So English is a language, but Canadian English, Irish English, Australian English, US English, UK English, etc. are locales.

Try these fun quizzes to test your knowledge of Canadian expressions:

If you take a look at the website for a multinational company or an organization with a strong international presence, you will likely find that they have not just translated their website into different languages (e.g. English, French, Spanish) but they have gone a step further and produced localized versions aimed at different locales. The Coca-Cola Company is an example of a company whose website has been localized for a variety of locales.

It’s not difficult to appreciate that, in many circumstances, a reader would prefer to engage with a text in the language variety that they know best. Therefore, from a business perspective, it often makes sense for companies (or governments or other organizations) to localize their texts rather than simply translating them. But in order to produce a localized version, it is very helpful for translators to be able to consult resources or use tools that can help them to identify and apply the terms and expressions that belong to the language variety in question. So what tools and resources are available to help translators produce texts for Canadian audiences? Let’s take a look at some language resources and tools that are Made in Canada, eh?