Skip to content
Positionality refers to the different ways in which each person perceives a given ‘reality’, depending on how they look at it.

David Szanto is a teacher, consultant, and artist taking an experimental approach to gastronomy and food systems. Past projects include meal performances about urban foodscapes, immersive sensory installations, and interventions involving food, microbes, humans, and digital technology. David has taught at several universities in Canada and Europe and has written extensively on food, art, and performance.

What if we could look at the Big Dipper from Alpha Centauri?

The ways we perceive a given situation depends on how we look at it, both literally and figuratively. That ‘stance’ is called positionality. It includes our physical placement relative to what we are looking at (e.g., near/far, above/below, inside/outside), as well a more figurative kind of placement. Figurative positionality relates to our formal and social education, upbringing and culture, personal experiences, race, class, age, gender, and other characteristics. These aspects of our identity act like a series of disciplinary, emotional, and cognitive lenses that influence how we view the world.

In some ways, positionality is like subjectivity, meaning that ‘reality’ depends on myriad individual ways of understanding the world. In academic research, acknowledging positionality is very important, because it allows the audiences of our research to understand the inherent biases in our work. Even in so-called objective or scientific research, positionality plays a role. (Think about how differently a physicist and a biologist might view and describe the role of carbon or hydrogen in their work.)

In the gray area in the illustration below, you can see how the Big Dipper constellation (Ursa Major) looks when viewed from Earth (the usual physical placement of we humans). In the black area, the yellow circles show how it might look from another angle, far away in outer space. The familiar Big Dipper shape is a flat, two-dimensional pattern that looks like a stylized ladle. But if we could zoom out into space and fly around the seven stars that make up the constellation, we would see very different patterns, none of which would look familiar. The reality of those stars is that they exist in three dimensions, and it is only from the surface of Earth that we see them as the Big Dipper.[1]

In the same way, figurative positionality also influences the ways we perceive ‘reality’. Depending on the makeup of this composite lens, concepts and objects may appear to us very differently. Being a scientist, artist, or philosopher is like looking at a set of stars from the surface of the Earth, a spaceship near Alpha Centauri, or a wormhole that connects us to other dimensions. Said otherwise, reality is relative—a relationship between us, the observers, and it, the thing we perceive as real.

Imagine a social context like a party, a shop, or a park. Using household items (toys, paper, building blocks, tools, etc.), create a simple set-up (on a desk or table) that represents this social context. Include elements of the built environment (architecture, designed objects, food, technologies, etc.) and the natural environment (people, plants, animals, soil, water, light). Imagine a scenario playing out and what you might do to demonstrate that scenario to others with your set-up.

In the image below, Courtney has depicted herself and multiple elements of her past, present, and future. Together they form a representation of her positionality in the world: a stance, a filter, an angle on all that she perceives. 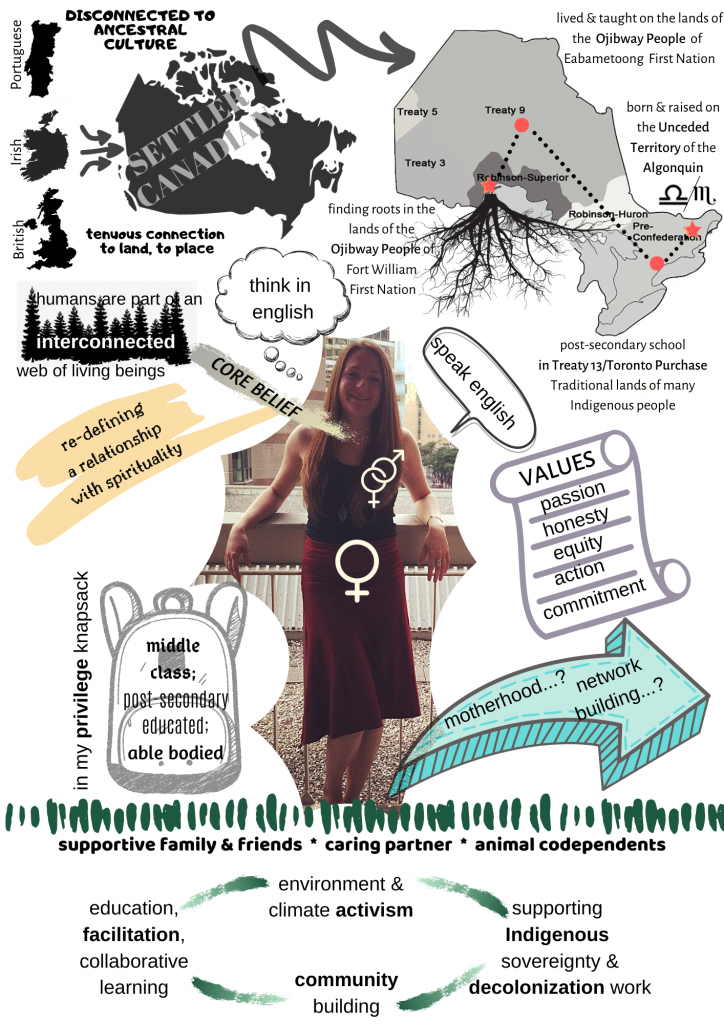 As an exercise, make your own sketch or collage, including as many parts of your life that you think bring an influence to the ways in which you view the world and its ‘truths’. Then:

Showing Theory to Know Theory by David Szanto and Courtney Strutt is licensed under a Creative Commons Attribution-NonCommercial-ShareAlike 4.0 International License, except where otherwise noted.