LGBTQ+ as a health disparity population

As a result of social stigma and discrimination, LGBTQ+ people report higher rates of mental health challenges, anxiety, and depression:

and people populations face many of the same health-related challenges that other members of the LGBTQ+ community face, while experiencing greater barriers to social inclusion and higher rates of discrimination and stigma.

The barriers transgender people face in accessing necessary transition-related care and services are associated with poorer mental health and high rates of suicidality. 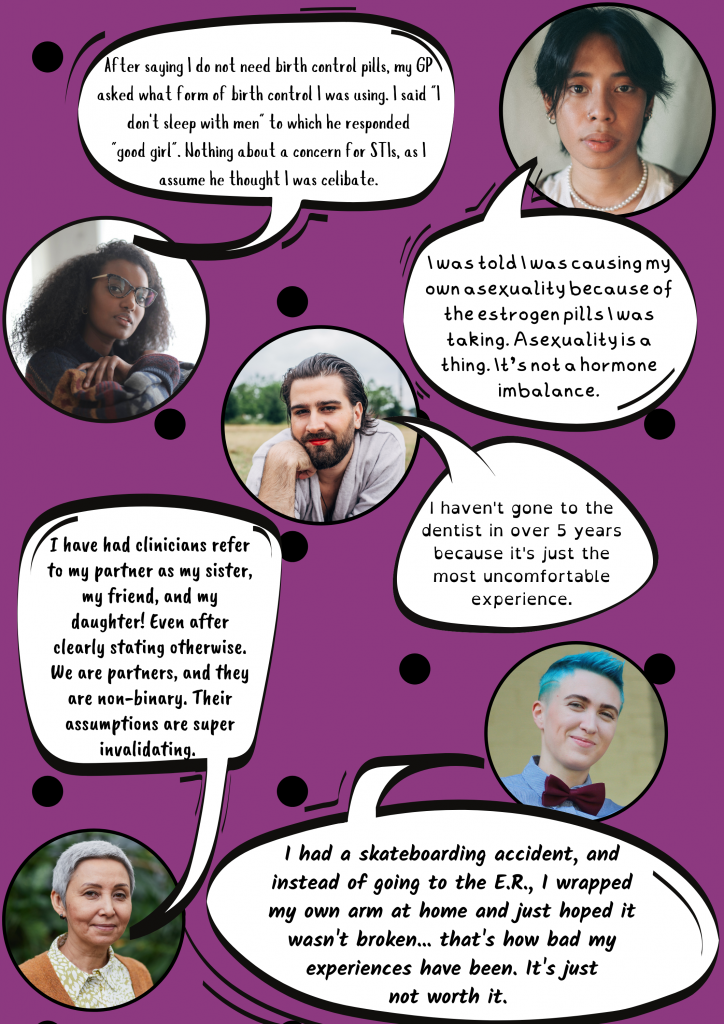 These stories are all too common, especially for trans and non-binary people. For more stories, take a look at the YouTube video below (5 minutes and 54 seconds). Although it depicts trans folks living in Oregon, their stories resonate with trans and LGBTQ+ individuals living in Canada and worldwide.

This video was created by the Oregonian, and copyright belongs to them.

a term typically used to describe a self-identified man who is attracted to other men or masculine-aligned people. This term can sometimes be used as an umbrella term for those who experience attraction to people of the same gender, but is not accepted as such by all members of the LGBTQ+ community.

a term used to describe a person who experiences attraction to two or more genders.

A person whose current sex/gender does not align with what they were assigned at birth. This is an umbrella term to describe the diverse ways that people can experience gender.

Transgender people, like cisgender people, can claim any identity in relation to their sexual/romantic orientation (for example, a transgender man may identify as heterosexual if they are primarily attracted to self-identified women and feminine people).

this term has come to describe anyone who hasn't yet defined their sexual orientation, gender identity, gender expression, or some combination of the three. Using this term allows them to avoid labels while exploring themselves and belonging to the community.

Because there are so many identities that involve gender and sexuality, it is often challenging to select a word or acronym that makes everyone feel included.

A term used to describe people whose current sex/gender aligns with what was externally assigned at birth. Essentially, anyone who is not transgender is cisgender.

An umbrella term used to describe those whose gender falls outside of the gender binary. Nonbinary people may identify as being both a man and a woman, somewhere in between, or as falling completely outside these categories. While many also identify as transgender, not all nonbinary people do.

LGBTQ+ Healthcare by Selinda Berg is licensed under a Creative Commons Attribution-NonCommercial-ShareAlike 4.0 International License, except where otherwise noted.